Federation Square to improve links to the Yarra

Federation Square will be opened up to the Yarra in a post-pandemic world with riverside activities and the promotion of its waterfront venues such as Riverland and Pilgrim.

Melburnians’ desire for the square to be better connected to the Yarra River, Birrarung Marr and nearby sporting and arts precincts was one of the key messages to emerge from a consultation report conducted as part of a government review into the future of the square.

The review was ordered by the government last year after it abandoned controversial plans to build a “flagship” Apple store at the square. 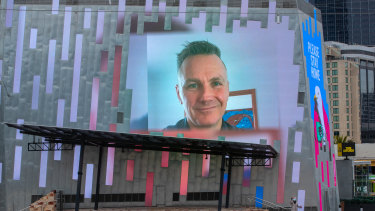 This followed Heritage Victoria’s refusal to allow the demolition of the Yarra Building to pave the way for the Apple store and increase connection with the Yarra River.

“Something has to happen … you just can’t allow it to kind of wither away,” Planning Minister Richard Wynne told The Age at the time.

“The way it was framed at the time was you need to demolish a building and build something that was different and obviously that was a path that was rejected,” he said.

Dr Csar said Federation Square would promote riverside activities to help people find a way through the architecture down to the Yarra.

“It’s activity that like breadcrumbs brings people down to the river,” he said.

“So we are looking at our riverside tenancies on the other side of the pandemic and what we might do that would bring people down. We will always be looking at ways to activate the river and improve connectivity from the square to the river in whatever way is available to us.”

Last August, Federation Square became the first 21st century site in the world to be recognised with heritage status.

Dr Csar, who was appointed CEO of Federation Square last September, said the heritage listing, the government review and the pandemic were each a catalyst for change and improvement.

“I think Apple forced the conversation about what the city and populace’s vision and hopes for the square were … and that led to the review (which) has led to a consultation process.”

The views of more than 1700 Melburnians were canvassed during the consultation.

The recommendations of the review – headed by Victorian Government Architect Jill Garner and former Ernst and Young managing partner Tim Eddy – are yet to be announced.

“That review process has given us great insight into what’s important and what people’s aspirations are,” Dr Csar said.

He said the pandemic had also made Federation Square question its role: “Are we a venue or are we a place where we have some intrinsic value and experiences that we can unlock and make available?”

The answer, he believes, is both.

One of the legacies of the pandemic is a virtual tour and podcast series that provide an indepth examination of the architectural history and design principles of Federation Square.

“We now recognise we have a globally significant site, there is a lot of interest internationally as well as domestically, but even now when you are in your lounge room you can experience the visual feast of that design.”

The Indigenous history and significance of the site on which Fed Square stands is heavily featured, including a flashback to the national apology to the stolen generation and a recorded interview with Koorie Heritage Trust CEO Tom Mosby.

“People of my age think of (Federation Square) as being the Gas and Fuel building and old rail yard but … it has such a long attachment to gathering. It’s always been a meeting place for millenia, it was only European settlement that stopped it. It was the site of Tanderrum.”

The festival of Tanderrum – the gathering of the people of the Kulin nations – is celebrated every October at Federation Square. 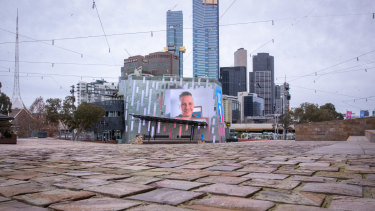 Except of course this one.

A few months ago, before stage four restrictions, Dr Csar recalls standing in Federation Square. In normal times he would have been surrounded by hundreds of people enjoying their day. Instead he found himself looking at the message on the big screen. “Go home,” it said.

“We are the only venue I can think of that spends time and money telling people to leave. But we see that as important, we are a barometer of Melbourne. We are here to play the role we can play as a civic institution and right now that message has to be stay home.”

Ten years ago, the world was treated to the most insane party movie ever made

I can't get hard with my wife, but have no trouble with my lovers | The Sun