Happy ValenHeinz Day! Fortnum and Mason is selling TOMATO KETCHUP truffles – but they’ll set you back £19.95 for a box of nine

While many will be venturing to their local shop to pick up a box of chocolates for their loved ones this Valentine’s Day, Fortnum and Mason is selling an interesting alternative – tomato ketchup truffles.

Those with adventurous taste buds will be able to sample the unusual flavour combination by stopping into the upmarket Piccadilly department store in London, where a pack of nine will set you back £19.95.

The new partnership with Heinz comes after the store launched its exclusive Heinz Baked Beanz Truffle at the end of last year – a nod to the store being the first place to sell the famous canned goods in 1901. 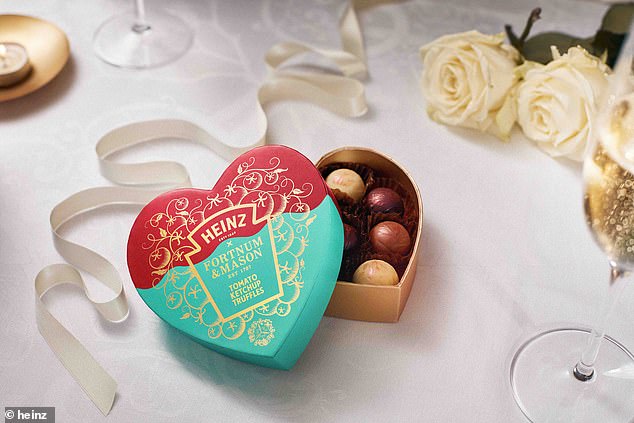 Presented in a sweetheart box and made entirely by hand, Heinz has combined more than 150 years of experience with the expertise of Fortnum’s chocolatiers to create nine ‘delectable’ chocolates.

Heinz claims the taste is ‘unmistakable’ and ‘deliciously rich’ as it blends ‘the thick Heinz Tomato Ketchup you know and love with luxurious, velvety chocolate, in a unique pairing’.

The box contains a selection of milk, white and dark shelled truffles filled with a blonde chocolate ganache – and Heinz Tomato Ketchup, of course.

‘The bright and tangy tomato flavour from the ketchup bursts through the silky creamy rich ganache with a sweet finish’ the makers say. 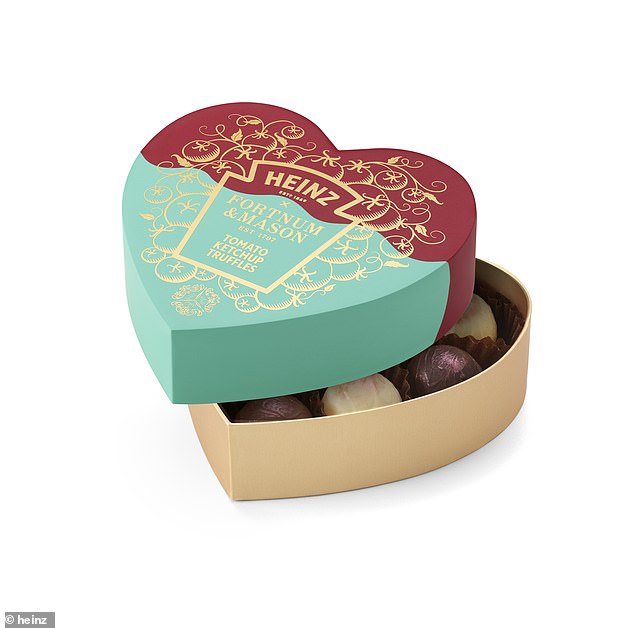 Presented in a sweetheart box and made entirely by hand, Heinz has combined more than 150 years of experience with the expertise of Fortnum’s chocolatiers to create nine delectable chocolates for you and your loved one to share

For those who can’t get to central London, the box is also available online, as well as in various Fortnum and Mason branches in train stations and at Heathrow Terminal 5.

TASTE TEST: WHAT DID FEMAIL THINK OF THE TRUFFLES?

‘I’m a big ketchup fan and have been known to gobble dark chocolate, but I was dubious to taste these, as some things just shouldn’t go together.

‘However, sometimes the most unlikely flavour combinations work, so I thought I’d give these a go.

‘Upon trying them I was pleasantly surprised, they weren’t quite as awful as I was expecting. You can tell the chocolate is really well made, and the ketchup taste isn’t particularly strong, but there is a tomoto-ey after taste.

‘I wouldn’t opt for them over a traditional truffle, and one was definitely enough. But as a novelty treat they were fun, although truffle ketchup is much nicer! – Bridie Pearson-Jones

Alexandra Bayet, sauces marketing manager at Heinz, said: ‘The Heinz and Fortnum & Mason relationship goes way back; they were our first UK stockist back in 1886; together we celebrated the Queen’s Diamond Jubilee with special edition Heinz Beanz in 2012, and last year Fortnum and Mason helped us celebrate our big 150th birthday with the launch of Ketchup Caviar.

‘And they also happen to be some of the best master chocolatiers around. So, it only makes sense that we celebrate the most romantic day of the year together with one of the most prestigious Valentine’s Day pairings.

‘Ketchup and chocolate are two of the nation’s most loved foods, and we felt that it was only right that on the international day of love we combine these two ingredients, resulting in mouth-watering truffles that are set to delight ketchup and chocolate lovers across the country.’

Sophie Young, confectionery buyer at Fortnum & Mason, added: ‘During the recipe development process, our chocolatiers considered the flavour profiles of both cocoa and the much-loved Heinz Tomato Ketchup, playing tasting elements off each other to balance both creaminess and tanginess. 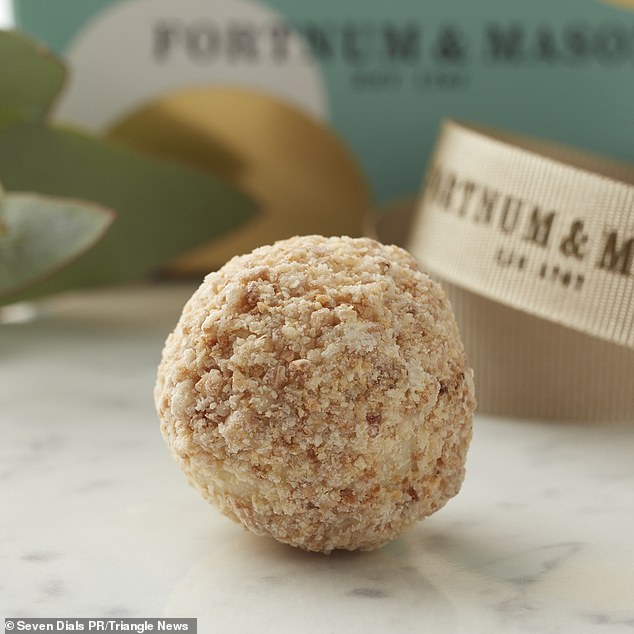 ‘They have developed something truly and unexpectedly delicious, showcasing Fortnum’s ability to create unique and exciting pairings that will capture the attention of ketchup enthusiasts and satisfy even the most sophisticated of palates.’

However, social media users remained unconvinced by the truffles, with some saying the idea made them feel sick.

‘I’m not sure if this is marketing genius or a journey into the depths of human cruelty,’ one tweeted.

Social media users remained unconvinced by the truffles, with some saying the idea of them made them feel sick

Another wrote: ‘@HeinzUK Please keep the ketchup out of the chocolate. I can’t believe this has to be made explicit to those over seven years of age.

A third added: ‘I’m going to hard pass on Heinz’ ketchup truffles, thank you very much’.

Although some were more keen on the unusual flavour combinations, with one exclaiming: ‘This sounds yummy!’

And, Fortnum, is, Mason, selling, t
You may also like:

Your daily horoscope for Sunday, December 5, 2021