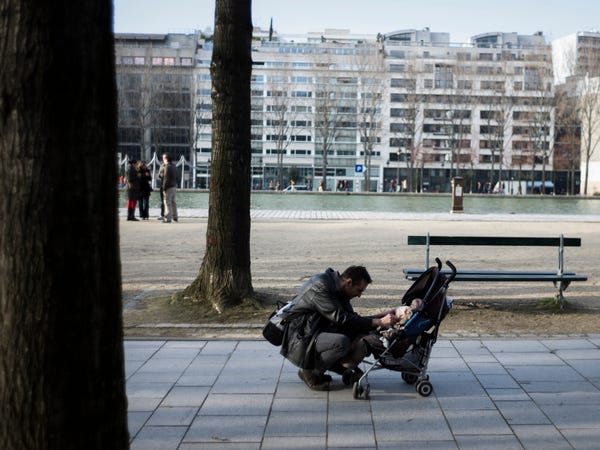 The president of France wants to expand the country's paid paternity leave policy and require new fathers to take advantage of at least part of it.

Before visiting a childcare center last Wednesday, President Emmanuel Macron announced on Instagram that he would like to extend France's paternity leave policy from up to 14 days to 28 days. Fathers would be obligated to take at least one week off from work and would be paid by the French state health insurance system, the Associated Press reported.

New mothers in France get at least 16 weeks off from work after the birth of their first child. After the third child, and beyond, mothers are granted 26 weeks. In all cases, mothers are required to take at least eight weeks off.

The announcement underscores the stark disparities in how new parents are supported in European countries compared to the US.

The US is the only industrialized nation that doesn't mandate some form of paid parental leave. (Some employees are eligible for 12 weeks of unpaid time off after giving birth, which means their jobs will be protected while caring for a newborn). The onus falls on individual employers to decide whether and how much paid leave to offer employees.

That approach is limiting for new parents. Nearly one in four women returns to work within two weeks of giving birth and 76% of dads go back to work within a week.

Parental leave provides numerous benefits to parents, babies, and even employers. One study found that paid leave programs can substantially reduce infant mortality rates and lead to a child's better overall health. Other studies have found that paternity leave can help fathers foster stronger bonds with their children, even after they eventually return to work.

In Sweden, new mothers get 18 weeks off after giving birth. Parents are also entitled to an additional shared 480 days off, and can split them up as they see fit. Each parent is entitled to 90 of those days. During that time, parents get 80% of their regular salary.

In Estonia, mothers get 140 days of maternity leave, which can begin up to 70 days prior to her due date. Mothers are paid their full standard salary. Fathers get two weeks of paid time off. After that, parents get an additional 435 days and the compensation is an average of their two incomes.

Kailyn Lowry Reveals One Of Her Exes Demanded a Paternity Test

Tori Spelling Recalls Being Bullied Over Her Looks, 'Hurtful' Comments About Her Eyes

People Celebrates the 80s with its New 1985 Special Edition