When their eyes locked, Andi Lew felt an instant connection. She knew this was someone she wanted to meet. As the stranger walked towards her, they exchanged smiles and it was obvious the attraction was mutual. When they struck up a conversation, both instinctively knew a bond was about to form. Three years later, this stranger is now Andi's best friend.

"Despite having friends I've known for longer, I don't have with any of them the sisterly connection I've found with Janine," Andi explains. 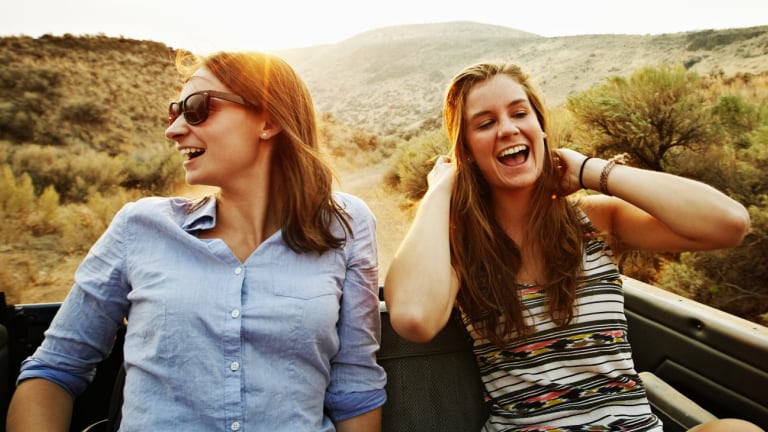 “It’s actually a lot of fun to work with your best friend.”

A 2015 California State University study of friendship chemistry found that, just like love at first sight, friendship at first sight has that spark of attraction – only it's platonic. The researchers discovered that the people most likely to experience this immediate connection are those with "agreeable, open and conscientious personalities".

"What often creates that spark is that we see an external quality we recognise as similar to ourselves," explains clinical psychologist Dr Samantha Clark.

It may be a sense of confidence they exude through their body language or the way they dress, and because that connects us with a sense of ourselves – and we also believe the feeling is mutual – we want to meet that person."

This is especially true for women, says Clarke. "From childhood, as girls we're encouraged to trust our emotions and intuition. And because friendship chemistry requires both, it's natural for us to be able to tune into feeling great around a specific person."

But even though first impressions do count, they won't be enough to sustain a long-term friendship. It takes time to build the foundations required for trust and genuine care to flourish.

"What friendships at first sight have though, that others don't, is the biological response that happens when we meet someone we click with instantly," Dr Clark says.

"The dopamine or pleasure-chemical release which comes with the spark will give us a little bit more drive to want to see that person again.

"Therefore, if every time we see each other we keep evolving our friendship, that friendship can continue to flourish for many, many years." 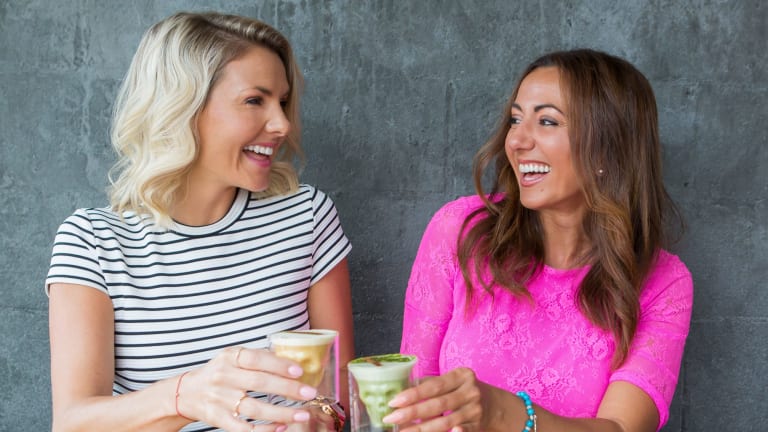 Andi: "I met Janine at a mutual friend's beach house in Torquay during the annual Bells Beach surf contest. I immediately sensed a soul-level connection with her. When she came over to try my food and we began chatting, I realised just how much we had in common. She does musical theatre and I used to be in Disney shows, so it was inevitable that we spent the rest of the day dancing and putting on small performances for everyone in the living room. We were both genuinely excited about being in the company of someone we felt so compatible with.

I next saw her at one of her singing gigs a few weeks later and we spoke on the phone a bit, but we didn't hang out as she went overseas to pursue her career and we lost touch.

About two years later, I was at the gym, and this girl jumps up in front of me saying, 'Hello!' It was Janine. We were thrilled to see each other, so we went for breakfast straight after. That's when we realised our initial connection was still there.

Janine was back for good, so we promised to hang out more as we both felt this was going to be the beginning of a beautiful life experience. It's been nearly a year since we've reconnected and we spend most days together.

We love hanging out together as we're both committed to living a healthy and positive life and we know we can always rely on each other for support and encouragement.

She's my perfect date for a fun night out. I can easily say we're the heart of the party and we'll be the first to get up and dance – especially to daggy '80s tracks like those sung by Whitney Houston, who's one of our favourite singers.

Since being in each other's lives again, we've celebrated Christmas together and even though I'm not religious, last year when I went to listen to her sing I gave her a gift. I wanted to make it a very special time for her and that's what we try to do for each other. I feel blessed to have her in my life, and I look forward to her being a part of it for a very long time."

Nastasia Marjanovic, 24 PR and talent consultant (at left). Hannah O'Donnell, 31 Managing director of a PR agency. Both from Sydney 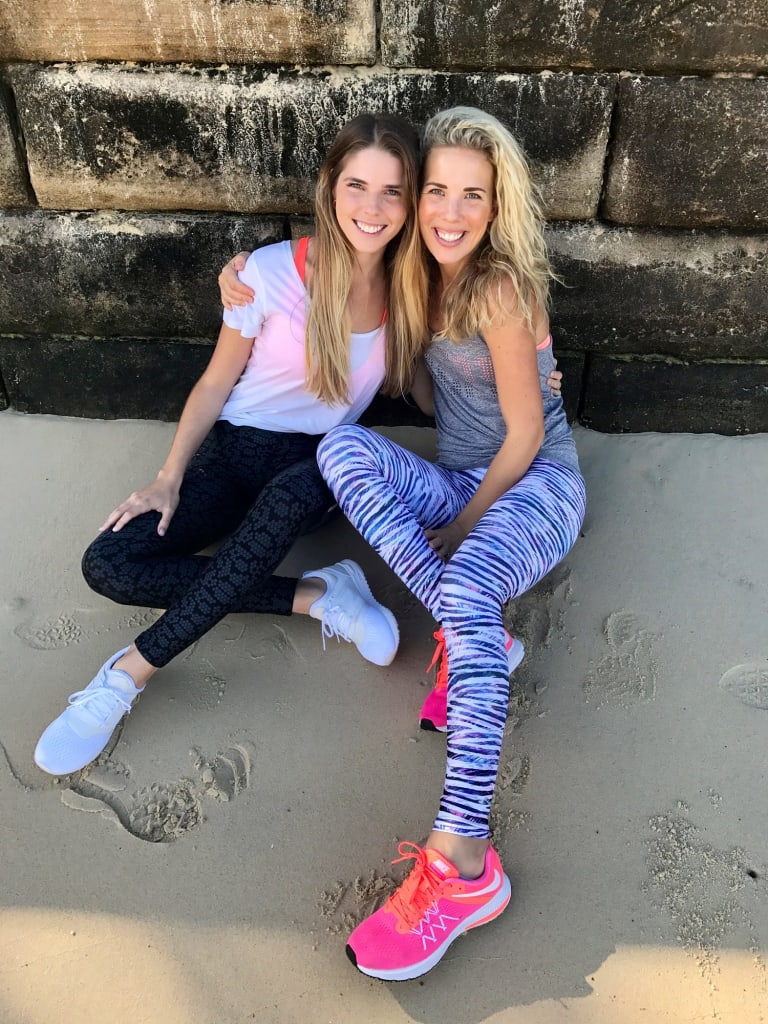 Nastasia: "I met Hannah after I answered her job ad. She was looking for the first employee to join her PR business, and when we met it was like we'd known each other for ages.

We just sat in a cafe drinking tea and chatting about life, family, hobbies and travel and we only stopped because the cafe was closing.

The next day I sent her a packet of green tea I loved with a note saying, 'Thank you so much for meeting me, this green tea is on me.' I thought that even if I didn't get the job, I still wanted to connect with her. Three years later, the note is still on the pinboard of our office.

The lines between work and pleasure do blur and everyone thinks it's crazy that I'm so close with my boss, but it feels right for me.

At job meetings we're often asked if we're related because we look so close and have that sisterly banter. Outside of work we enjoy going for long walks to catch up on what's been happening in our lives, and at least once a week we'll go out to eat at a new restaurant. We often joke how we're soul sisters that have reconnected in this lifetime.

When I first began working with her, even my boyfriend used to get jealous of our relationship because I would text her all the time. He would say, 'You need to stop working and put the phone down.' But I wasn't working, I was texting her about The Bachelor – we both love reality TV. Now he thinks our friendship is so special.

Because we established our relationship as adults and we chose to be friends, as opposed to growing up together, it's a much deeper relationship where we have each other's best interests at heart. And even though we don't always agree with things when we're at work, there's no conflict because we're open and upfront in our communication and we avoid dwelling on things. We have a tradition that I buy her birthday cake each year as I know what she wants. However, we don't wait for birthdays to show our love for each other. I made a passing comment on one of our walks about a jumpsuit I loved and had to come back and try on. The next day, when I came in to work, there it was on my desk – wrapped up with a message from Hannah saying, 'Thank you so much for everything.

It's actually a lot of fun to work with your best friend, and we know we're going to be together forever." 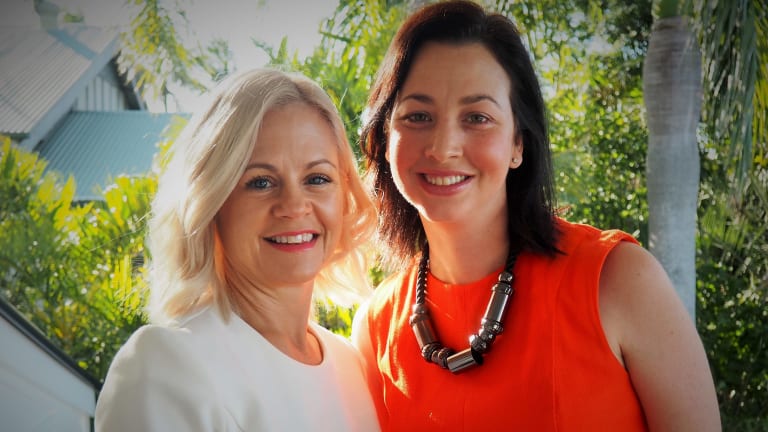 Tracey: "I was having acupuncture fertility treatments in 2012, and one day the acupuncturist introduced me to Melanie, who had just finished her treatment. I instinctively felt like I had found a kindred spirit.

When we began chatting, our connection was almost immediate, not only because we were on the same emotional journey but also because of the similarities in our personal lives, our careers and our medical history.

We exchanged emails and began communicating regularly. Because we kept running into each other at the acupuncture clinic, these synchronicities turned into coffee dates, and when we both fell pregnant within the same cycle, that elevated the friendship to a stronger level.

As it happened, our boys were born 48 hours apart in the same hospital, we joined the same mothers' group, and throughout our maternity leave we caught up regularly. Around the 10-month mark it became evident that we both wanted to go back to work, so we began sharing a nanny. When our sons were just over a year old, we both found and bought our dream homes, which happened to be in the same neighbourhood. So we now live just around the corner from each other.

It's been five years since we met and the challenges we have both faced have created a unique bond between us. Living close to one another means that it's easy to go and see a movie together, celebrate our birthdays, or enjoy a dinner chatting about our fears and aspirations.

We are completely vulnerable and totally authentic with each other. We have each other's back and in years to come we'll be in each other's lives, which is a fortunate position to be in."