First published in the Sydney Morning Herald on April 3, 1972

On stage and off, Mick Jagger was probably the single most powerful performer to emerge from the solid rock culture of the sixties. Love him or hate him, his was a presence impossible to dismiss. 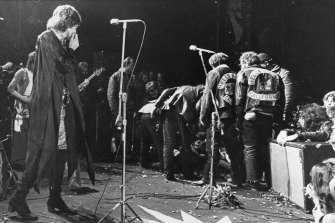 Mick Jagger looks on as the Hells Angels drag an unidentified person onstage at the Altamont rock festival, California, Dec 6, 1969.

Consummate performer, the ideal combination of demon sensualist and little-boy lost, Jagger was king of the amplified generation. But even the king could not command the events of 1969 which culminated in the Altamont pop concert documented in "Gimme Shelter " (NRC — Embassy, Sydney), a stunning, deeply disturbing piece of "cinema verite" from the directing team of David and Albert Maysles and Charlotte Zwerin.

"Gimme Shelter" is a record of the Rolling Stones' concert tour of the US in the closing months of the sixties. Inevitably and wrongly, it will be compared to "Woodstock." Yet "Woodstock" was a paean to the peace people, a mawkish and marvellous ode to the "love children"; "Woodstock" revelled in a freak occurrence, the gathering together of a half-million kids for a weekend of non-violent communion.

"Woodstock" is the record of a dream. "Gimme Shelter" is reality, a grim testament to the fact that even the love generation is not immune to hate and fear and violence.

The Maysles-Zwerin team were originally recruited to make a documentary film of the Stones' US tour. Without the events at Altamont, one can imagine their final product to have been another "Mad Dogs and Englishmen" sort of pop cinema. 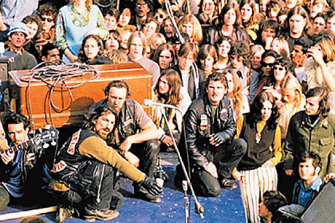 The tour was a great success across the US.

The pay-off was to come at the concert tour's end in San Francisco when the Stones would thank their American fans by presenting a free concert. Plans for the concert were announced at a press conference held on the group's arrival in the States.

But while the Stones performed their way west, the businessmen, under the direction of lawyer-supreme Melvin Belli, haggled and hassled over details. Local residents and officials in the San Francisco area opposed the show. Changes of venue seemed to happen with day-in, day-out regularity. The concert was on and off and then on again.

While the advance men and the lawyers and officialdom argued, the Stones and 300,000 of their followers moved inexorably toward the showdown. The final change of venue came the night before the concert was to begin when a businessman, with a good eye to the public relations possibilities of a magnanimous offer, volunteered the Altamont Speedway, near San Francisco as a site for the show.

The site was too small; food and sanitation facilities for the expected crowd were non-existent; the whole atmosphere, as caught by the Maysles ever-grinding cameras, was one of tension born of haphazard preparation. 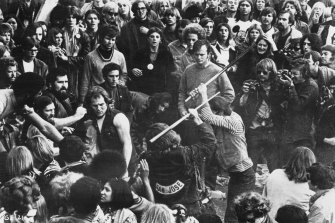 Hells Angels beat a fan with pool cues at the Altamont Free Concert, 6th December, 1969 in a still from the film Gimme Shelter.Credit:20th Century Fox

The climactic event was, of course, the killing of a young man by a knife-wielding member of the Hell's Angels, the selected honour guard for the Rolling Stones. ( The killing was later ruled a case of self-defence, based on the evidence of the Maysles film.)

But in the light of the concert's general feeling, the killing itself becomes almost inevitable. The fear is tangible; anxiety, not love, emanates from the young faces which crowd around the performers' platform. It is a mark of the film-makers' skill that this feeling of unease, that the nearly visible potential for violence, is communicated so directly to the film audience.

The film is undercut throughout with the faces of Jagger, drummer Charlie Watts and the other Stones as they watch their tour replayed over a viewing console.

Jagger the stoic, post-Altamont and again in possession of his cool, watches Jagger the king unable to control his court. Jagger-now watches what Jagger-then could not comprehend. Jagger sees Jagger fail to communicate: he sees his own fear, and the effect is visceral.

The film lays no blame for Altamont (unless one is prepared to accuse the button-down "rip-off" artists who plotted the happening with no conscious thought to its inevitable conclusions). No one really appears to be at fault, not even the hapless, hopeless Hell's Angels who only wanted free beer and a little respect for their bikes.

The Stones as performers are lost somewhere between the East and West Coasts to the Stones as the unwitting catalysts for violence. And in the end, the love generation packs up its blankets and its dreams of another Woodstock, and deserts Altamont.

It had its experience and surely is the wiser for it.