From two-faced politicians to surly teens, a new page for cartoonist

With her daily cartoons for The Sydney Morning Herald and The Age, Cathy Wilcox has spent more than 30 years lampooning the foibles of our political leaders. But the Walkley Award winner's now turned her pen to a more familiar group of rabble-rousers: teenagers.

With ABC journalist and radio presenter Sarah Macdonald, the pair have penned So… You're Having a Teenager: An A-Z of Adolescence, a guide to that most challenging of parental periods. For Wilcox, the pivot from her day-job isn't as harsh as it might seem. 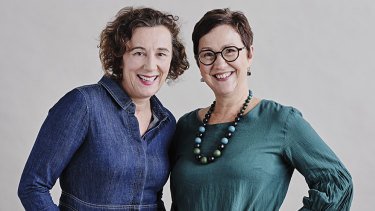 "It's a different headspace," she says. "My audience is very much attuned to my more political stuff so they might not be so used to this side of me, but going back into my cartoons of long since past this is stuff I've always been thinking about."

As longtime friends and next-door neighbours, Wilcox and Macdonald came up with the book's concept during their morning dog-walks. 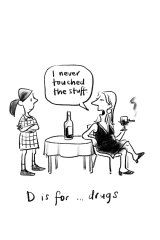 So… You’re Having a Teenager: An A-Z of Adolescence from Argumentative to Zits.Credit:Murdoch Books

"But we had to think about what the approach would be. You could start out just as a funny list of things – you know, gee aren't teenagers fun or crazy or difficult or whatever – but we realised there's also plenty of people going through a pretty perplexing time of it, and often very dark times.

"So we think of this as a companion – to that moment your darling little primary school child, who has been so sweet up until now, suddenly turns surly or argumentative, or comes home with ideas, fashions, wants and needs that don't resemble that child you thought you knew all these years."

Both authors came to the book from differing perspectives – Macdonald with kids just entering the maelstrom of teenhood, while Wilcox's kids had just finished high school. She recalls the moment the usual family routine – have dinner, put the kids to bed, enjoy some quiet time with her partner and/or TV – was upended. 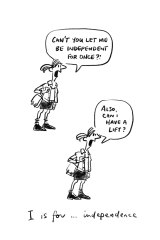 So… You’re Having a Teenager: An A-Z of Adolescence from Argumentative to Zits, Credit:Murdoch Books

"Suddenly it's 10pm and the kids are still around, having an argument about something or other. You kind of go, 'When did we go from having a family with children to being a sharehouse with opinionated people?'" she laughs. "So you've got to be a lot more conscious of demanding your own mental space. It's like, 'OK, it's 10 o'clock now, I'm off the job.'"

For all its sly inter-generational ribbing, Wilcox says the book is "written with a great deal of affection".

"Sarah and I talked about that a lot," she says. "We've been so impressed by the young kids we know – watching them become smart, thoughtful and engaged, wanting to go to climate rallies and things like that… You cannot anticipate at all who they will be, and there's this whole sort of becoming of a mature person that is quite amazing. But it can also be a bit alarming at times. Each dog-walk would bring its own 'Oh, you wouldn't believe what happened last night!' stories."

She hopes the book might echo the support both felt during those daily catch-ups.

"We've both been through some tricky times, mental health and the rest of it, the 'tunnel', I call it, of adolescence," says Wilcox. "It can be a dark tunnel, and it's really good to have a bit of insight and a bit of support to help you bring your kids through the other side."

So… You're Having a Teenager: An A-Z of Adolescence from Argumentative to Zits is out now through Murdoch Books.