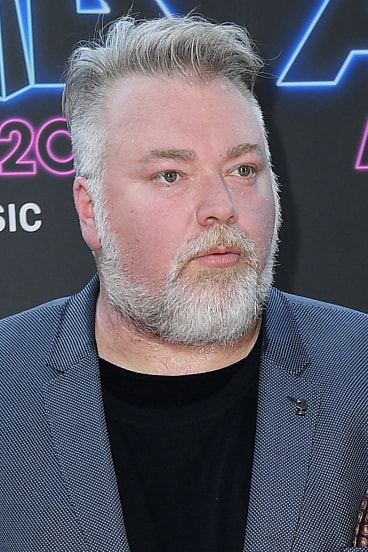 Kyle Sandilands is one of the male comics who has been given the green light.

So Channel 10 ran a tone deaf (and dumb and blind) ad about its new project: a week of comedy show pilots.

Conceptually I like the idea of running comedy pilots and seeing what sticks. However, from the look of the ad, Channel 10 had already decided what will work and it is blokes. White blokes, in particular. They then added insult to injury by including in the visual the merest hint of a female viewer holding the remote, presumably just about to bask in the glory of all that white male wit.

They got called out for it, predictably enough (Dear advertising and programming depts at Channel 10 – do you read the newspapers? Watch TV? Follow social media?) by Jane Kennedy, herself a comic luminary. Her character, Brooke Vandenberg, ace reporter on Frontline, is one of the great satirical creations.

Kennedy’s criticism of the wall of blokes was quickly supported by other women including Magda Szubanski, arguably Australia’s most popular comic actor.

At the moment, Australian Hannah Gadsby is tearing up the comedy world with her searingly funny/serious one-woman show, now screening to worldwide acclaim on Netflix. I have seen Gadsby occasionally on TV, once hosting a show about art, but mostly as a guest on shows fronted by male comedians. Male comedians sitting behind a desk.

It was Wendy Harmer (another great Australian comedian) who alerted me to the fact that only male comedians get to sit behind a desk.

Charlie Pickering sits behind a desk, so does Shaun Micallef. John Stewart was behind a desk and now his replacement Trevor Noah sits there, too. John Oliver (Last Week Tonight), Stephen Colbert (The Late Show), Jim Jeffries (The Jim Jeffries Show), Russell Brand (on his YouTube channel), Nish Kumar (The Mash Report) – desk, desk, desk, desk and, yes, you guessed it, desk.

In contrast, Samantha Bee (Full Frontal) stands up. So does Rachel Parris (The Mash Report). Kitty Flanagan (The Weekly) and Roz Hammond (Mad as Hell) get to sit on the visitor’s side of the desk.

The only comedians lacking a penis who have been granted full desk privileges that I could think of are Sue Perkins (Mel and Sue) and Sandi Toksveig (QI), otherwise women of wit get to visit desks or sit on panels with other comedians behind desks, but almost never take control of the desk themselves. When Harmer herself hosted The Big Gig on the ABC decades ago, she was never granted a desk.

The desk, of course, is a symbol of power and control. Bosses sit behind desks. The man who sits behind the desk on the comedy show often has his name in the title and his finger on the jokes.

Now we are at last getting over the sexist belief that "women aren’t funny" (well, everyone who doesn’t work at Channel 10 is, anyway), isn’t it about time we give more women desk privileges?

It's time we saw at least one satirical comedy show fronted by a woman on Australian TV – long past time.