Have you been using laundry detergent wrong? Shocked mums discover the ‘right’ way of adding liquid to the machine (but some have been doing it for years)

A mother has claimed that the lid of liquid laundry detergent should be placed in the washing machine along with clothes, shocking thousands of Australians who have never heard of the method before.

The claim was made by American woman Amber Miller in a Facebook post which resurfaced in an Australian cleaning group on Tuesday.

While caps are typically used to measure liquid and pour it into the washing machine, Ms Miller said her daughter Nicolette told her they’re actually ‘made to be thrown in the laundry’ to transfer as much detergent to clothing as possible.

The mum from West Virginia claimed running ‘dosing caps’ through the machine prevents liquid congealing around the edge of the plastic and rinses them more thoroughly than washing by hand. 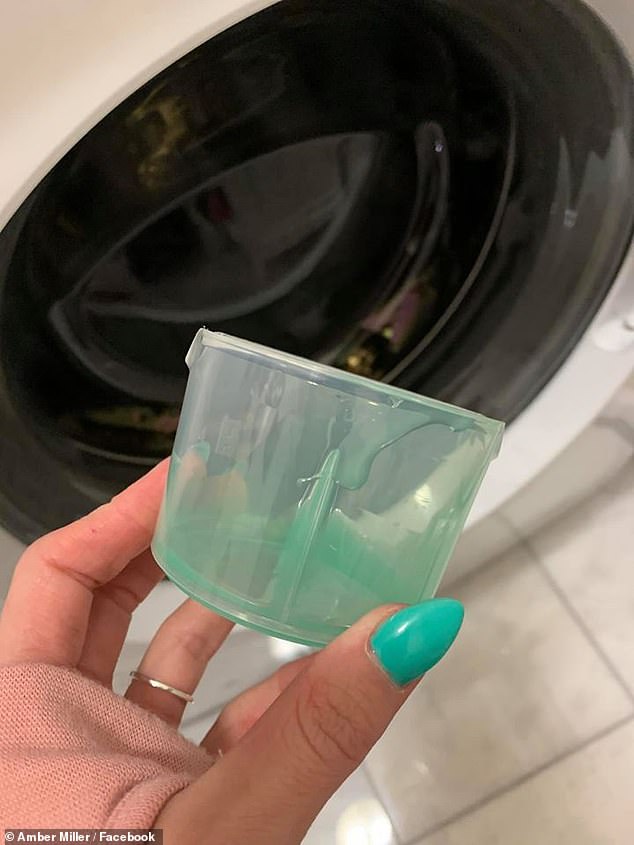 While the lid of laundry detergent (pictured) is typically used to measure and pour liquid into the machine, a American mother says it should be thrown in to be cleaned with laundry 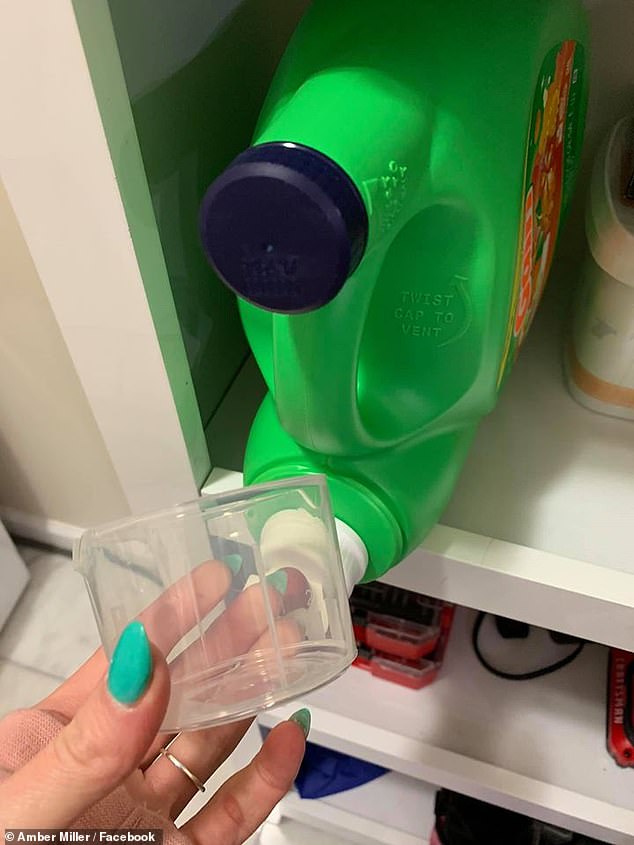 ‘Mind blown. Go ahead – tell me you knew this,’ Ms Miller captioned the post, which has gone viral.

Thousands assured her she was not alone, saying they’d never heard the idea before.

‘No way – I gave up buying [liquid detergent] because I got sick of rinsing the cup!’ said one woman.

‘What sorcery…I’m finding laundry to wash now JUST to do this,’ said another.

A man tagged his girlfriend and asked why she’d never taught him the trick, adding: ‘My life has been a lie.’

The virality of Ms Miller’s post prompted an investigation by fact checking blog Truth or Fiction.

The website examined three brands of liquid laundry detergent to verify her claim that the ‘cups are made to be thrown in the laundry after you fill them up’, and found none of the manufacturers provided any recommendation on washing lids this way.

However some lids are specially created for the machine, although instructions advise they should only be thrown in with every third or fourth load to prevent them cracking or warping.

Other brands promote their ‘dosing caps’ as being designed for use in the wash every time.

Lids suitable for machine washing machine will be clearly labelled ‘toss in wash’.

But not everyone was convinced, with critics branding it ‘ridiculous’ and untrue.

‘This makes no sense. I just dip them in the water and wash it off. Why would you wash the whole cup?’ one woman asked.

‘And if you don’t put it back on, laundry detergent drips all over yourself. I hate stupid people,’ said a second.

A third said she wouldn’t mind throwing the lid in with towels, but wouldn’t want to risk plastic scraping against her clothes or underwear.

A few said they’d been putting lids in the washing machine for years.

‘I didn’t know people were NOT doing this all along,’ one woman said.

‘Yes, I’ve been doing this forever. That s**t gets all gross and it’s a waste,’ said another.

One woman said she’s been using the trick since her 91-year-old grandmother showed it to her 20 years ago.

Been, hack, proves, U', youve
You may also like:

Sarah Huckabee Sanders Reveals Why She Left The Trump Administration