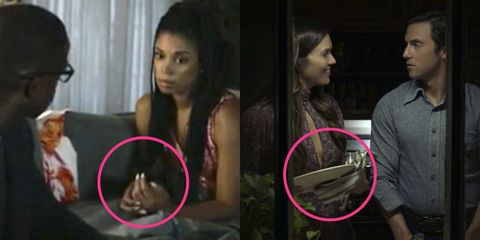 The This Is Us writers packed a whole lot into Tuesday night’s one-hour episode. If your head is still spinning from everything that took place, you’re not alone.

Just in Jack and Rebecca’s storyline, fans learned that the man Rebecca was kissing on her front porch was her former high school sweetheart, Alan. She decides to skip out on a date with Jack for him, and then accepts Alan’s offer to move to New York. But when she sees Jack again at a serendipitous meeting in a grocery store, Rebecca takes him back and tells him she wants to go on a road trip to LA.

Then, there’s Kate, Randall, Kevin, Beth, Toby, and all of their life-changing decisions, like Kate starting her egg retrieval process, Randall’s political endeavors, Kevin’s trip to Vietnam, and Beth questioning her marriage after getting fired. This is only episode 3, folks.

Because so much happened, here are some of the moments you may have missed that teased what could be coming up next in season 3:

OMG ITS LOIS FROM MALCOLM IN THE MIDDLE #ThisIsUs pic.twitter.com/Q8WSnkilP3

Aside from being introduced to Rebecca’s ex, Alan, we meet his mom, Lois. She has a sweet relationship with Rebecca, and they have an honest conversation about finding the right partner.

Lois tells Rebecca she settled down with Alan’s dad, Bob, because he was “sweet and he was warm and kind,” and that was “rare, and it’s still rare.” Rebecca immediately thinks of Jack when she hears this, and decides she needs to pursue him instead.

Rebecca reiterates on multiple occasions that she was a career woman, though, and always wanted to become a singer. So, it makes sense that she once questioned her path of settling down with three kids in season 2 when she tried to land a singing gig at a local lounge.

Bonus fact: The actress who played Lois is Jane Kaczmarek, best known for Malcolm in the Middle. Her name was also Lois on that show.

The dishes were an important motif throughout the episode.

In the beginning, a young Rebecca is shown helping her mom do the dishes and making a lasagna for her father while her dad sits in the other room and watches TV. The montage also depicts Rebecca’s mother putting on makeup, cleaning, and taking her husband’s hat — a sequence of scenes clearly meant to portray the expectations of women at the time.

Later on in the episode though, Rebecca and Lois — two women who both made clear that they were career-minded — stand by the sink next to a bunch of dishes. But instead of doing them, they’re toasting with champagne in celebration of Rebecca’s initial decision to go live with Alan and pursue her dream in New York.

By the end though, it’s clear that Rebecca isn’t going to settle in her career or with her love life. Rebecca ultimately chooses to turn down Alan’s offer and take a risk with Jack. Showing that Jack and Rebecca are equals and symbolizing Rebecca choosing to forge a path of her own, the two take on a stack of dirty dishes together. To make the moment even sweeter, Rebecca asks Jack if he wants to go on a road trip with her to LA and he accepts.

There were clues in previous episodes that Randall and Beth’s marriage had problems.

On the surface, Randall and Beth have always seemed like the perfect couple. But for viewers who have been watching closely, they may have noticed that Randall has a tendency to make big life decisions — like quitting his job, taking over the rental property, and now running for office — without talking with Beth first. Aside from this, it’s become more apparent this episode that Beth feels like her problems and worries get pushed aside because she always has to be there for Randall.

Randall’s father, William, tells her in a flashback scene, “There’s going to come a time in your future when you need to be the soloist — put your needs front and center, make Randall hold down the root for a while. And when that time comes, Beth, I want you to promise me you won’t just sit there silently, fiddling with your wedding ring like you’re trying to remind yourself why you got married in the first place.”

But right after Randall tells Beth he’s going to run for office, Beth is seen fiddling with her ring.

Randall says some variation of “scrambled” three times as Kate writes down how many eggs were retrieved.

“We’ve all been scrambling ever since, scrambling to keep him alive, scrambling for new ways to keep close to him,” Randall tells Beth as an image of Kate writing down that eight eggs were retrieved appears on screen. “Scrambled” eggs is not a positive visual for viewers to see when discussing in vitro fertilization, so perhaps this was foreshadowing of how successful the process will be for Kate.

@NBCThisisUs did y’all REALLY have to have Randall say “scrambling” as Kate was writing “eggs”? #ThisIsUs

In the preview for next week’s episode, Jack is holding a black soldier, who is likely the man adult Kevin reaches out to via email.

Around the end of this episode, Kevin writes an email to a former veteran who was in the war with Jack to learn more about his father’s past in Vietnam. His name is Mr. Robinson, and it’s apparent that he has lost his right leg. In a preview of a flashback scene for next week’s episode, viewers see Jack holding on to a black soldier who appears to have been hurt.

From: Good Housekeeping US