If you’ve had a farmhouse sink-shaped hole in your heart ever since the Fixer Upper series finale aired on April 3, then you are going to dig this data. Homes.com broke Fixer Upper down by the numbers and boiled all five seasons of Chip and Joanna Gaines’s hit show down to several impressive infographics. The house hunting site’s team watched all 79 episodes of HGTV’s home renovation series, crunched a lot of numbers, and generated some handy dandy charts for all the internet to see. Some handy dandy, exquisitely shiplapped charts, that is.

The Homes.com infographics feature statistics regarding the value added to the renovated homes, the average purchase price, how often Chip and Joanna’s kids came the renovation site bearing food, and so on. It’s interesting stuff (Clint Harp made so many tables!), but there is one stat in particular that will stop Fixer Upper fans in their tracks. And yes, it has to do with shiplap and Joanna Gaines.

If you are reading this, you almost certainly watched Fixer Upper, and if you watched Fixer Upper, you know a thing or two about shiplap. But for good measure, here is a quick explanation: Shiplap is the style of wood paneling that is frequently used as siding on barns and sheds, as well as on interior walls and ceilings. Like a sliding barn door that leads to a kitchen or exposed beams that run throughout a living room, shiplapped walls really deliver a rustic-chic vibe.

How does one go about creating shiplap? Oh, so glad you asked. Please enjoy Chip’s shiplap tutorial below.

Joanna shiplapped a lot of houses on Fixer Upper. Like, a lot of houses. And the end result is always lovely. She is the Queen of Shiplap, and we are all her shiplap-obsessed subjects who cannot wait to see what she does next with the wood paneling. Shiplap is basically her calling card. Heck, she could literally print out calling cards on shiplap and everyone who has ever watched Fixer Upper would be like, “As if there was any other option.”

If you had to guess the percentage of Fixer Upper homes that are shiplapped by Joanna, what number would you scribble onto a piece of shiplap and slide across a reclaimed wood table? Would you guess it’s more than half, if not nearly all of the houses? That feels about right.

Alas, as reasonable and educated as that guess may seem, it is incorrect. Get this: Joanna shiplapped less than half of the Fixer Upper reno projects. According to one of Homes.com’s infographics, Joanna used shiplap 39% of the time. That’s it.

In addition to the shiplap ship-tistic, here’s some data on tables created by Clint, mid-renovation problems, upgrades, and the Gaines kids’ visits. 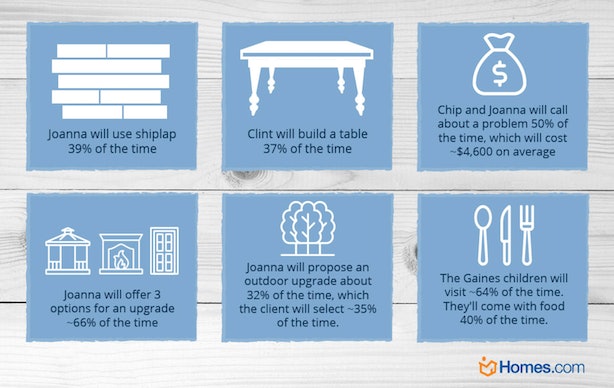 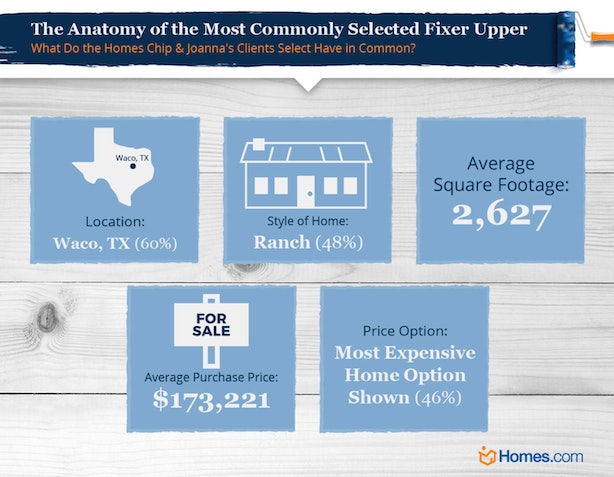 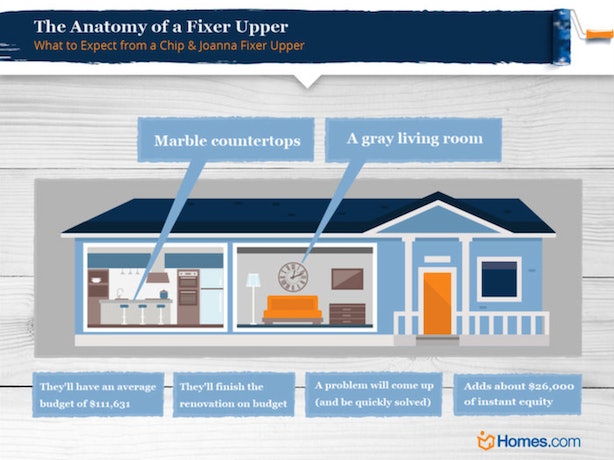 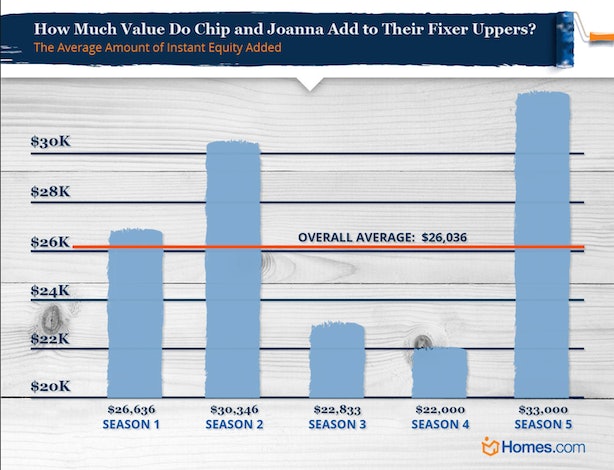 Next time you catch a Fixer Upper episode where Jo takes a plain ol’ dining room wall and turns it into a shiplapped masterpiece, do not take it for granted. You only have a 39% chance of seeing Joanna do her shiplap thing.