After months of anticipation, the moment many royal fans have been looking forward to is finally here. On Monday, Kate Middleton welcomed her third child, and the family is happily celebrating their newest member. But where does Middleton’s new baby fall in line for the throne? Being that he was born to Prince William, Prince Charles’ oldest son, the path to the throne is shorter than you might think.

If you’re not familiar with the way the monarchy works (which makes sense, if you live in the United States or somewhere other than the United Kingdom), it can all be a little confusing. There are a lot of heirs, and adding another royal baby in the mix makes that list even longer.

While it’s going to be a sad day when Queen Elizabeth passes away — and now that she’s 92 years old, that day is, unfortunately, probably a lot sooner than any of us would like to admit — there’s a clear pattern to how the line of succession will work. And if Prince Harry ever hoped to become king, well… that’s a dream he’s definitely kissed goodbye by now, because unless a massive tragedy hits the family, it’s pretty impossible.

According to Newsweek, the new baby will shake things up a bit, pushing everyone behind him even lower on the future ruler totem pole. After Elizabeth’s death, her son, Prince Charles, is next in line, followed by Prince William. Then, George and Charlotte are next, followed by the newest addition to the royal family, with Prince Harry and Prince Andrew (Queen Elizabeth’s third child) bringing up the rear.

Basically, for Middleton’s third child to take the throne, his great grandmother, grandfather, father, and older siblings would all have to die at pretty young ages. Not only would that be terribly tragic, but it’s also pretty improbable. And since Charlotte will only be Queen if George dies without ever having children, that makes this baby’s shot at ruling even less likely.

Being that becoming king is probably a pretty stressful gig, this kiddo is actually in a really awesome position. Not only will he probably never have to rule, but he also gets all the perks of being part of the royal family without having to worry about leading a monarchy. Even Charlotte is likely in the clear here, which means that all the responsibility is put on George. And as many oldest children can probably attest, isn’t that the way it always goes? 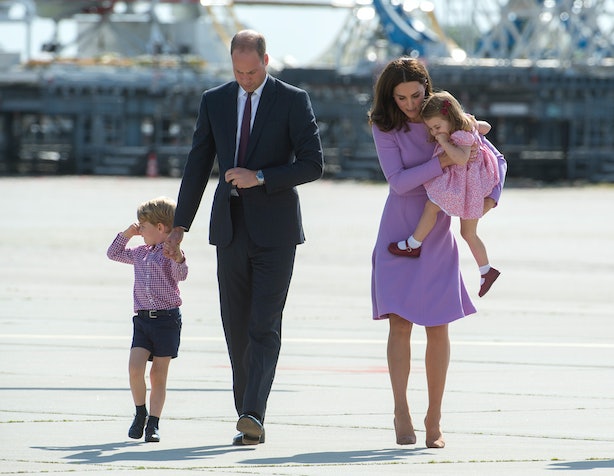 Honestly, though, all that matters is that Middleton and her baby are both safe after delivery, which they are — and it seems like the whole family is over the moon about her second son making his grand entrance into the world. It’s an exciting spring for the royal family with so much to celebrate.

And really, this baby is lucky for a lot of reasons that have nothing to do with eventually assuming the throne (or not) someday. He has two pretty awesome parents, a couple of really cool older siblings, and plenty of other family members to grow up around. Plus, there’s a good chance that the baby will be adored by the entire world, which is a pretty sweet situation to be born into.

It’ll be awhile before a shift of power occurs (hopefully — hang in there, Elizabeth), so now, all any of us really have to worry about is watching this little one grow up. Now that William and Middleton’s newest baby is here, fans of the royal family can just sit back and wait for those adorable photos to roll in.