Follow
Home » Lifestyle » ‘I used to wonder: How much more can I handle?’: Rebecca Black on being cancel culture’s patient zero

‘I used to wonder: How much more can I handle?’: Rebecca Black on being cancel culture’s patient zero

Rebecca Black, the YouTube star whose notorious single Friday marked her as one of the earliest targets of intense social media abuse, will tour Australia in May.

The song – an innocent paean to weekend frivolity, released in February 2011 when Black was just 13 – was among YouTube's earliest viral clips. But its simple lyrics and stilted video led to global headlines decrying the song as the “worst ever” and sparked unsparing online abuse against the then-teenager.

Almost a decade on, Black – who will perform at mini-festival Bingo Loco XXL, alongside Aussie noughties pop star Nikki Webster – maintains a complicated relationship with the song. 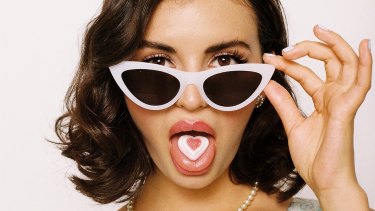 The Friday singer, now 22, is touring Australia as part of the Bingo Loco XXL show in May.

"I perform it… sometimes. It's definitely not something I do all the time," the now 22-year-old says. "I was playing a university in the States a month ago and I sang a little bit of it – a new version that sounds nothing like it did – and it was one of the most fun moments of the night, both for me and for everybody else. Because it's something nostalgic and, despite everything, it's a fun song, you know?"

In an Instagram post last month, posted on the ninth anniversary of Friday's YouTube upload, Black revealed the online bullying she endured after the song went viral and the extent to which it wreaked havoc on her mental health and self-worth throughout her teenage years.

In the post, Black wrote: "I wish I could go back and talk to my 13-year-old self who was terribly ashamed of herself and afraid of the world. To my 15-year-old self who felt like she had nobody to talk to about the depression she faced." The post went viral and drew an outpouring of support towards the singer.

Black says it was the first time she's allowed herself to discuss her experience with "brutal honesty".

"Going from 13 to 22 I've had a lot of time to think about it all and process what it all means; how something so dark shaped so much for me," she says. "I think that post was to express with new honesty how I've been feeling about it all and really what happened to me as a result of being a child on the internet.

"I had such an extreme example of it but so many kids are on the internet right now and, whether they're going viral or have two followers, it affects all of them and it affects all of us. I think the more we can be honest about what that does to us, the more, hopefully, we can help each other."

In the post Black said the infamy still affected her as recently as at age 19 when "almost every producer/songwriter told me they'd never work with me."

"There was a time I used to wonder: 'How much more of this can I handle?'" says Black. "It's something I never understood until recently: a kid is so young and fragile and malleable, and so much of who we are stems from the things we experience growing up. There were for sure times I've thought, 'Oh my god, I'm going to have to deal with this for the rest of my life.' But every day is new, every day brings hope and I'm definitely better."

For modern users the online world of 2011 is a lifetime ago; Black's social media baptism of fire came before Twitter's peak and Instagram had only just launched. Does she think today's culture has a better understanding of how damaging such online behaviour can be?

"I do think there's a greater awareness of the weight our words carry; that's grown a lot since 2011," she says. "But the thing about the internet is it's ever-changing; there are limitless new things that appear, new apps, new platforms and they're all so unique in what they do to our psyches. With things just constantly popping out of nowhere, there's always a kind of a wild west we have to figure out."

Despite her cautionary experience, performing music – even Friday ("It's been a process, but I do think I've reclaimed it," says Black) – remains a passion.

"It's like so many of us have that one thing we feel we were just born to do," says Black. "Even with the weird, strange experience I've had with it, I still feel really lucky to have that one passion."

Tom Hanks and Rita Wilson Return to U.S. After Coronavirus Diagnosis in Australia

How each star sign should spend their coronavirus lockdown

Why Lady Gaga Is So Confident In Her New Romance

Self-isolating? Here are 12 of the best classic films ever made that you simply must watch