Follow
Home » Lifestyle » If Please Like Me was worst then new show is ‘best of me’: Josh Thomas

If Please Like Me was worst then new show is ‘best of me’: Josh Thomas

When he sat down to write the hit ABC comedy Please Like Me, comedian and screenwriter Josh Thomas grafted his own family's flesh onto the show's bones.

"It was full of stuff that I had experienced that I felt, like, under-equipped for and interested in exploring," he says. "When my mum in real life attempted suicide, it was so weird, I'd never seen suicide on TV in a way that isn't … something quite sort of cartoonish. That interested me." 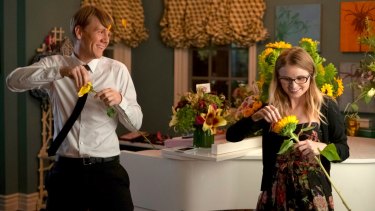 Recasting a similar emotional palette – grief, loss and rebirth – onto a new show, the US comedy Everything's Gonna Be Okay, Thomas wanted to flip the idea that with grief comes inescapable sadness. "In real life, if something sad happens to my friends, we don't spend the day wallowing in that sadness, we still try to have a nice day," he says. "I would spend the day trying to cheer them up even though they're going through a hard time."

In Everything's Gonna Be Okay Thomas plays Nicholas, a young, gay Australian man on holiday visiting his American father, and his two half-sisters, Matilda (Kayla Cromer), who is on the autism spectrum, and Genevieve (Maeve Press), who is landing puberty with a thud. In the opening episode his father Darren (Christopher May) reveals he has incurable cancer, forcing Nicholas to step up and become custodian of his younger half-siblings.

The series is less autobiographical than Please Like Me – note that in the former Josh played Josh, while here Josh plays Nicholas – but Thomas does concede they are all reflections of himself.

"[Nicholas is] a bit more thoughtful than I am, a little more articulate than I am," he says. "That's the nature of a TV character. I feel like in Please Like Me, honestly, Josh was probably one of the worst versions of me. And in Everything's Gonna Be Okay, Nicholas is like the best version of me."

Significantly, the series is neither mawkish nor schmaltzy. It tackles grief and loss with great honesty, and writes its characters' emotional notes with great tenderness. It also is not afraid to gently and authentically mine the grief for humour. 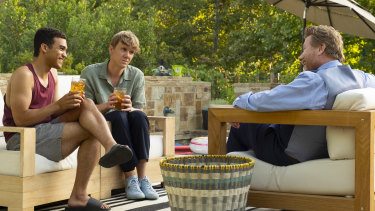 Alex (Adam Faison), Nicholas (Josh Thomas) and Darren (Christopher May) in the show, which airs on Stan.Credit:Freeform/Tony Rivetti

"Nothing in life is totally sad or totally funny," Thomas says. "And funerals are often quite sweet and, often, if it's a funny person, they reflect that person. The people I know and the people in my world and the people in the TV show are the kind of people that would like to try and remember somebody by telling funny stories about them."

The first episode doesn't shy away from the show's darker notes. Christopher May, as the father of the three kids, gives a tender and affecting performance.

"When I look back on my work it seems like I'm pretty obsessed with death, I don't know what to tell you," Thomas says. "Because [the show's US broadcaster] Freeform is Disney it felt important to me that if you're working for Disney you kill a parent in the first act because that's tradition," he adds. "And we introduced the dad because I really wanted you to get to know him so you knew what they'd lost." 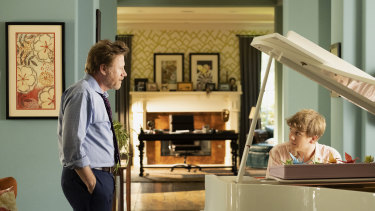 The series was partly inspired by Thomas's curiosity about high school life. "Teenage girls are so funny to me, and I just really wanted to write a teenage girl," Thomas says. "Please Like Me, that was my autobiography, but I didn't get to explore high school. I think we have four teenage girls on [Everything's Gonna Be Okay] and I feel like they were all different phases of me when I was a teenage girl."

On a more serious note, Thomas also wanted to write a story with autism at its centre. "Honestly because I knew so little about it and I thought this is crazy that I'm so dumb about this," he says.

"What happened was I watched a documentary called Autism in Love, I read the title and I thought, wait, can people with autism feel love? And two minutes later, I was like, that's the stupidest question, you're an idiot," he says. "The fact that I was so dumb was interesting to me and then I just spent months researching and learning about it."

Thomas notes the writing experiences for Please Like Me (developed in Australia) and Everything's Gonna Be Okay (developed in America) were quite different.

"In Australia, Tom [Ward] and Liz [Doran, co-writers] would come over and we'd sit on the couch and then we'd go out for lunch for awhile and then we would just hang out and then we'd be like, all right, let's go write," Thomas says. "And then at the end of the season, Tom and Liz would just, like, decide what episodes they wanted credits on and they would give them that."

The American writer's room, Thomas says, is "very regimented and also very serious. The thing about Americans, especially in LA, [is that] the business is so serious and everyone's so ambitious. So people are like an elite sports team or something, like they're trying to beat each other out and be really good.

"Australia's not like that, everyone here is just more ambitious. It makes sense when you look at showrunners getting US$20 million development deals, it's encouraging. Whereas in Australia, it's like, 'Oh, if I do a good job on this show, maybe I'll get to work on pretty much a similar level of show'."

All of that said, Thomas concedes he is ambitious in the American sense.

"In Australia, I was somewhat ambitious, I finished Please Like Me and I didn't do anything for a year," he says. "Most people would be like, now do something or we're going to lose momentum. But I was just so happy that I got to make a TV show, that it went for four seasons and that we came out of it alive. I just couldn't believe it. I'm just like, 'Oh my God, we pulled it off. We made a show. This is thrilling'.

"When you're in America, yeah, it's contagious," he adds. "All of a sudden you want to do it better and bigger. I mean, in LA you literally have those houses on the hills looking down at you, being like, what are you doing? All the time. And it's, I don't know, it's uncomfortable for me, it's an uncomfortable thing to live in. But you do start wanting to do better."

Everything's Gonna Be Okay airs on Fridays at 5pm AEDT on Stan.

This Is Martha Stewart’s ‘Fun and Festive’ Easter Tradition

Nina Dobrev & Shaun White: The Truth About Their Relationship After They’re Spotted Hanging Out