Follow
Home » Lifestyle » Indigenous soldiers out of the shadows

Indigenous soldiers out of the shadows

Sent to northern France he was wounded twice, finally ending up in a military hospital in Britain. There on August 29, 1917, he died from pneumonia. 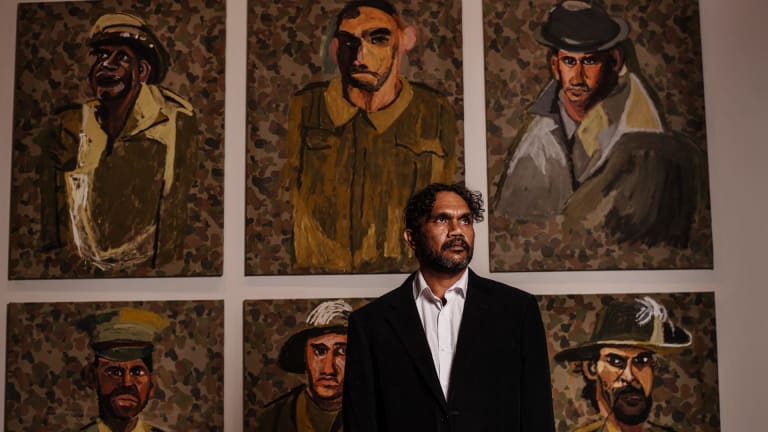 Vincent Namatjira, at Hazelhurst Arts Centre with part of his new work.Credit:Louise Kennerley

Punch's story is no different from the individual tragedies of the 210,000 Australians killed or wounded in the First World War – but for one key aspect.

He was one of the more than 1000 Indigenous men who signed up, despite being rendered non-citizens in their own country. 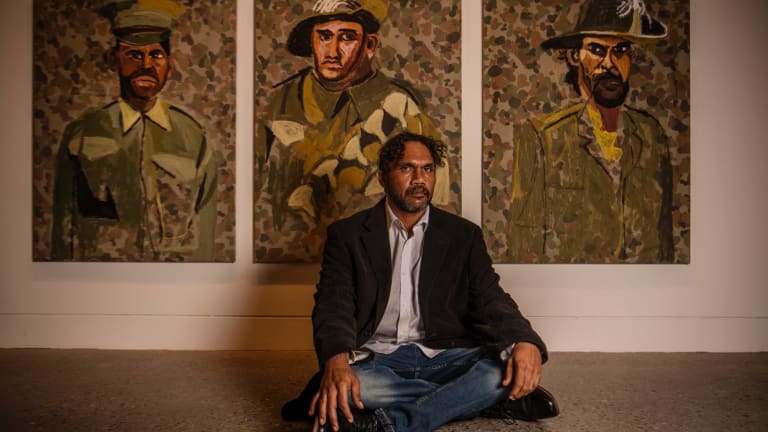 Vincent Namatjira, at Hazelhurst Arts Centre with part of his new work for the exhibition.Credit:Louise Kennerley

It was Punch's story and that of other Indigenous soldiers that inspired Vincent Namatjira to bring together a group of more than 40 artists – black and white – for an exhibition he has called Weapons for the Soldier.

Namatjira, the great-grandson of the legendary Albert, says he wanted to bring the Indigenous soldiers' contributions out of the shadows. "Despite the huge sacrifices these men made, their stories remain hidden, camouflaged in history," he says. "I was trying to understand the mindset of the Indigenous men who volunteered, neglected and mistreated in their own country, but still willing to fight and die to protect Australia."

The exhibition features a large group of Namatjira's fellow artists from the Anangu Pitjanjatjara Yankunytjatjara lands as well as other invited artists, including Ben Quilty, Jonathan Jones and Shaun Gladwell.

Namatjira's own contribution is a six-panel work, each featuring a portrait of an "unknown" soldier, including one based on William Punch. The works have been painted on army surplus material.

Namatjira says the title of the show also has a distinct personal resonance for him. "My weapon is a paintbrush," he says. "I battle on the canvas every day. I'm fighting against how to get it right with colours. Sometimes I win, sometimes I come back the next day and try again on the same canvas. It's like a competition between me and the canvas."

Lately it appears he has mostly been coming out on top. This year he was awarded Highly Commended in the Archibald Prize for a typically quirky self-portrait and next month he will become the first Aboriginal artist to show at the prestigious Art Basel fair in Florida.

Namatjira says he was "pretty surprised and shocked at the same time" to be selected, adding: "But it's pretty cool to be the first Indigenous person to go over there."

Weapons for the Soldier, Hazelhurst Arts Centre, Gymea, until February 3

Indigenous, of, out, Soldiers, the
You may also like: