Follow
Home » Lifestyle » ‘It was very joyous to get out’: First quarantined Australians head home as 36 others test positive

‘It was very joyous to get out’: First quarantined Australians head home as 36 others test positive

The first group of Australians to be placed in mandatory hotel quarantine are able to breathe a sigh of relief after they were released from Sydney’s Swissotel on Wednesday, with those travelling interstate cleared by NSW Police to avoid a second round of quarantine in their home state.

But for some, including a family of seven who had been sharing a room at the Hilton, the nightmare is far from over. 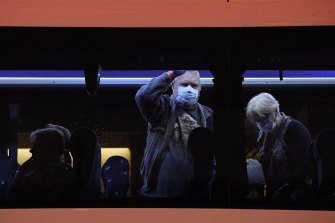 People leaving quarantine board buses at the Swissotel on Market Street in Sydney CBD. Credit:Kate Geraghty

Many passengers, including Darwin-based businessman Sakib Awan and his wife, would be travelling home across state lines with border restrictions in place that could potentially see them forced to quarantine for another two weeks.

NSW Police Commissioner Mick Fuller said he has signed clearance documents to allow those travelling interstate to skip the second round of quarantine. He said he hoped the documents would be honoured by all states and territories.

After enduring two weeks without fresh air and exercise at Swissotel, Mr Awan said another two weeks "might be too much" for him and his wife.

He said he thought the hotel initially "was obviously not prepared" and "did not have very clear instructions" for looking after quarantined guests, but that the second week saw a significant improvement in conditions.

However his one main request, to get some fresh air, was never granted.

Mr Awan said when he eventually stepped outside on Wednesday morning he found himself shrieking.

"I couldn't help but take in a big deep breath and automatically came out this scream. Not one but three screams, for getting fresh air finally," he said.

"It was a very different experience. I have never been detained like this in my life. It was a very joyous occasion to get out." 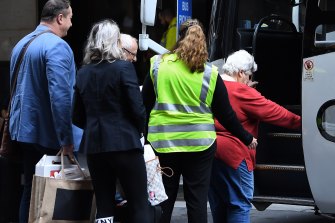 People board buses that are waiting to transport those leaving quarantine at the Swissotel.Credit:Kate Geraghty

The hotel quarantine operation has not been without controversy. Poor food, lack of cleaning products for in-room hygiene, no provision of sanitary products for women, lack of mental health support, poor internet access, and no access to fresh air are among the complaints from travellers confined to their rooms for two weeks.

One woman who was sent to the InterContinental said she had to pay a guard outside her room $50 to bring her tampons after several hours of fruitless requests.

The woman, who requested anonymity, said this occurred after she had presented a note detailing her anxiety condition to a police doctor at the hotel, and was told if her condition worsened she would be sent to a psychiatric ward at RPA for the remainder of her quarantine.

However, the woman was among a number of people with diagnosed mental health problems, including anxiety disorders and PTSD, who who were released to isolate at home after spending a week in hotel quarantine.

About 2000 more returned travellers who flew into Sydney from March 29 are expected to be released from their hotel rooms on the weekend.

All travellers would undergo a final health check before departing their hotels, and would still be required to adhere to all other directions under the state's Public Health Act as they returned home, NSW Police said in a statement.