Aldi’s £3.99 Kevin The Carrot 2020 toys go up for sale on eBay for as much as SIX times the price before they’ve even gone on sale

Adli’s Kevin the Carrot has quickly cementd his status as a much-loved Christmas character alongside The Snowman and Elf On The Shelf, with desperate parents queuing in their thousands to get their hands on a toy one ever year.

And with the latest range set to go on sale this weekend, the £3.99 cuddly toys have already popped up on eBay for up to six times the price.

The soft toys will be going on sale online and in UK branches of the German supermarket this Sunday 15 November at 8 am, including a bundle of the entire range for

However, the coveted merchandise has already been spotted available for pre-sale on eBay with eye-watering prices up to £50 for a character bundle that will cost £19.99. 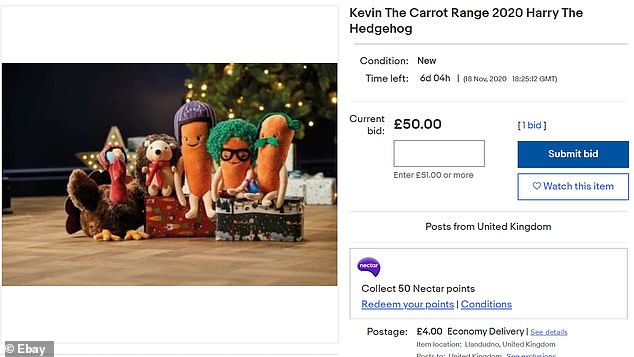 eBay users have listed a selection of Aldi’s Kevin The Carrot toys for pre-order (pictured), with an asking price of more than triple the original retail price of £3.99

The collection of toys available from Aldi is expected to include Kevin the Pilot, Kevin’s Grate Grandparents and Harry the Hedgehog.

One seller eagerly listed the complete set on eBay asking for upwards of £50, excluding delivery and has already attracted one bid.

Another offered online shoppers the opportunity to pre-order Kevin’s Grate Grandparents for £34.99, despite the characters being just £3.99 from Aldi.

The supermarket’s much-loved Harry The Hedgehog character is also priced at dsix times the original amount, with an asking price of £24.99.

Despite being priced at just £3.99 in store, Kevin’s Grate Grandparents have gone on sale for £34.99 on eBay 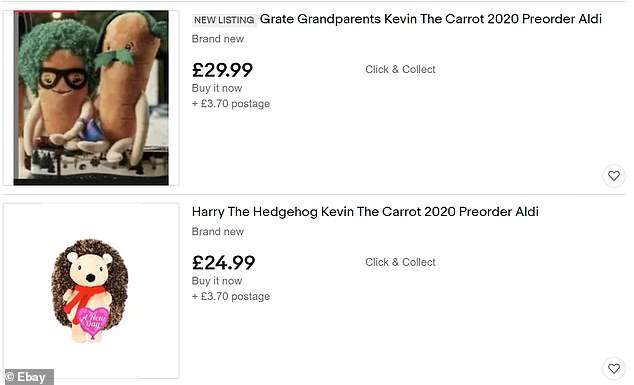 Aldi will be selling a bundle of five carrot characters dressed in the outfits seen in this year’s advert for £19.95.

Last year’s campaign followed Kevin as he put on an extraordinary Greatest Showman inspired Christmas show as well as escaping from the ‘Leafy Blinders’.

In addition to the soft toys, Aldi will also be offering themed pyjamas and Christmas decorations, according to The Independent.

‘Aldi is anticipating such demand for its upcoming Christmas advert plush toys featuring Kevin the Carrot, that it has employed the same online queuing technology as Glastonbury to manage the clamour on its website when the toys are released,’ an Aldi spokesperson said.

eBay sellers hoping to profit from the popularity of the much-loved collectors toys have listed Kevin the Carrot merchandise from previous years for more than £1,600. 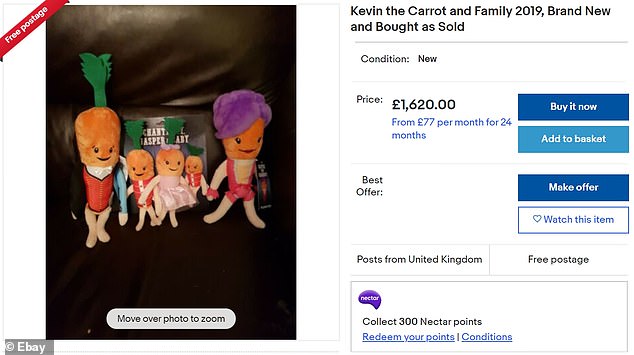 One eBay seller has listed a collection of Kevin the Carrot toys from last for £1,620, or pay monthly from £77 per month

Carrot, eB, Kevin, on, selling, the
You may also like: