Has Killing Eve lost its sparkle? Once thrilling drama has grown ‘stale and boring’ in series three, critics claim – but Jodie Comer’s impish assassin Villanelle is as stylish as ever

Awards darling Killing Eve seems to have lost its sparkle, with critics branding the hotly-anticipated third series ‘lifeless’, ‘tired’ and ‘boring’ in their first-look reviews.

The BBC thriller returns to screens on Sunday (US) and Monday (UK) after networks brought forward the premiere date from this summer, much to the delight of millions of fans stuck at home during lockdown.

Once again, the drama focuses on stylish assassin Villanelle (Jodie Comer) and former MI5 agent Eve Polastri (Sandra Oh) as they reignite their game of cat-and-mouse.

Having survived the gunshot wound she sustained in Rome in the series two cliffhanger finale, Eve is now ‘hiding in plain sight’, working as a chef in New Malden. Meanwhile Vilanelle has been given a ‘promotion’ and is now training new assassins. 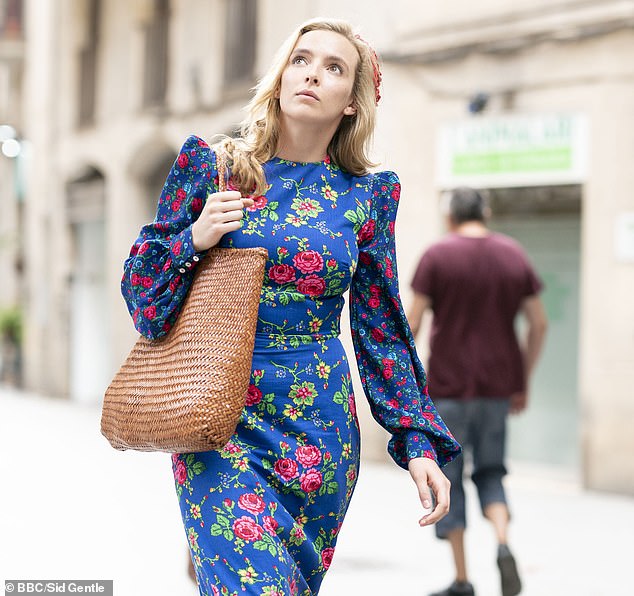 Flower power: Comer has been hailed ‘impish’ and ‘engaging’ by critics – and remains as stylish as ever – the early episodes in the series have left critics on both side of the Atlantic feeling lukewarm, with the majority handing the show 2-3 stars. Pictured, Comer in a trendy belted floral tea dress by A-list favourite label The Vampire’s Wife in series three 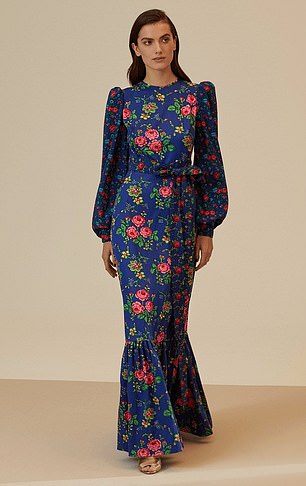 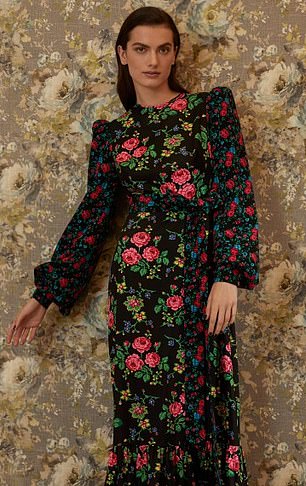 Designer threads: Villanelle’s dress, as seen on a model. The style is now sold out but similar designs are available. The Duchess of Cambridge is among the fans of the designer label

But while Comer has been hailed ‘impish’ and ‘engaging’ by critics – and remains as stylish as ever – the early episodes in the series have left critics on both side of the Atlantic feeling underwhelmed, with the majority handing the show 2-3 stars.

However fans of the show have no need to worry about the lukewarm reception sounding the death knell for Killing Eve as series four has already been given the green light.

Awarding it two stars, he writes: ‘Where Killing Eve had a vitality, it now feels tired to the point of lifelessness. Once fresh and thrilling, Killing Eve has grown stale and predictable.

‘Killing Eve has already been renewed for a fourth season, so criticism is probably p*****g in the wind, but the truth is that beyond Comer, it doesn’t have much left to offer.’ 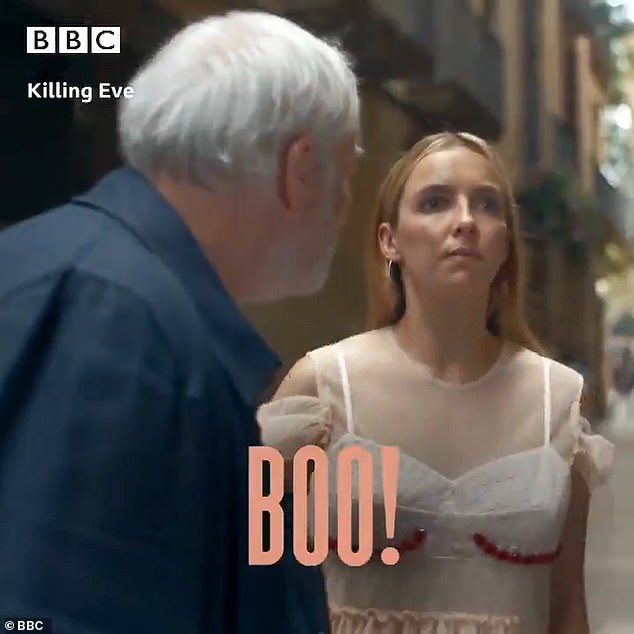 High fashion: Villanelle is seen in a tulle dress by Simone Rocha in another scene, pictured

Ballerina chic: The £1,200 tulle creation is available to buy at half price from Farfetch, pictured

Kaitlin Thomas for TV Guide, who gave the show 2.5 stars, agreed, and noted part of the problem lies in the decision to swap scriptwriters between each series.

What the critics say

Kaitlin Thomas, TV Guide (2.5 stars):  ‘That’s what Killing Eve now feels like: a copy of its former self. The edges are now duller, the lines less distinct.’

Brandon Katz, The Observer: ‘It’s juicy and entertaining and shocking and stylish as always. But the Honeymoon phase is over.’

Flora Carr, Radio Times (3 stars): ‘The opener of season three still has many of the original’s hallmarks: cat-and-mouse games, obsession, shock murders, genre-defying plots and characters. But is it as fun to watch?’

Fleabag creator Phoebe Waller-Bridge was at the helm for series one, handing over to Emerald Fennell for the sophomore series. Suzanne Heathcote has now taken up the position.

Thomas writes: ‘As each new showrunner is left to pick up the pieces left by the person who came before, they valiantly try to recapture the magic of Season 1, but the shine only continues to wear off as the characters never seem to move forward in any meaningful way and the narrative doubles down on its least interesting storylines… Killing Eve now feels like: a copy of its former self. The edges are now duller, the lines less distinct.’

Flora Carr for wrote in her three-star review of the first episode for Radio Times: ‘The opener of season three still has many of the original’s hallmarks: cat-and-mouse games, obsession, shock murders, genre-defying plots and characters. But is it as fun to watch?…

‘Asides from a brutal twist near the end of the episode, I found myself longing throughout for scenes featuring the impish Villanelle, dressed in a variety of wigs and custom suits.’

Brandon Katz for US publication Observer also picked up on Comer’s stand out performance, writing: ‘Comer once again delivers a virtuoso performance that combines unhinged mania with wounded vulnerability and desire… . It’s juicy and entertaining and shocking and stylish as always.’ 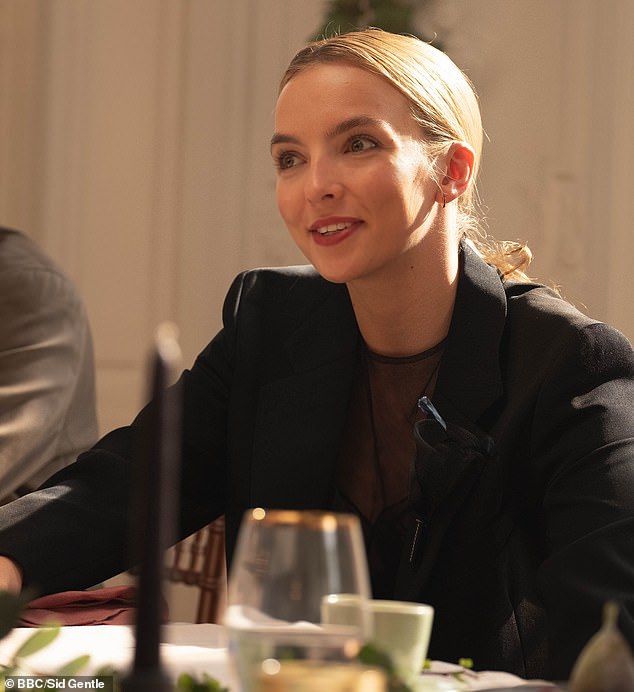 Sleek and professional: Another scene shows Villanelle at a table in a business-ready ensemble of a black blazer worn over a sheer top, although the designers are not known 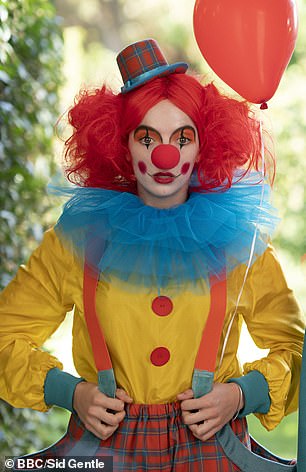 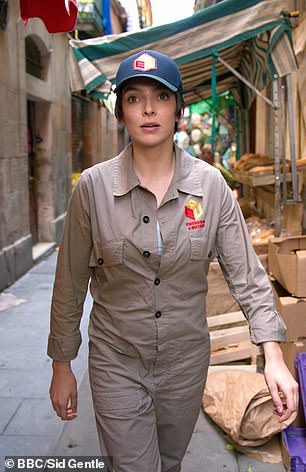 Playing dress up: In a nod to the fun of the series, two promotional images show Villanelle dressed up in costumes. The assassin is seen as a clown (left) and a deliver driver or mover

However he noted: ‘But the Honeymoon phase is over. We know these two can’t make it together in the long run and so does the show itself. That’s the problem.’

‘Heart-stoppingly brilliant, with plenty of shocking deaths, new characters and jaw-dropping, creative murders, the twist-filled first episode will make you laugh one minute then gasp in horror the next – even if you can see what’s coming.’ 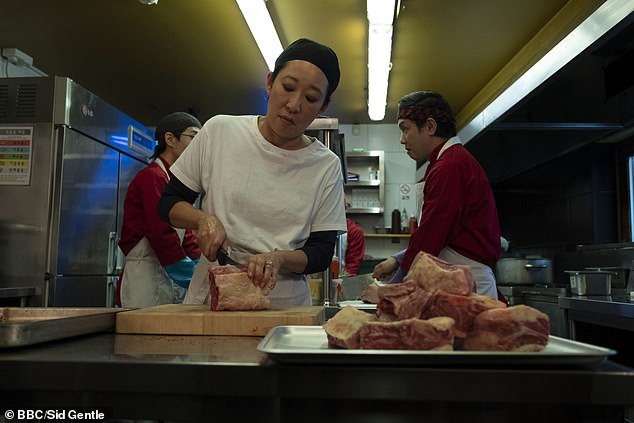 Low key: Having survived the gunshot wound she sustained in Rome in the series two cliffhanger finale, Eve is now ‘hiding in plain sight’, working as a chef in New Malden, pictured

Villanelle’s style file: The designer looks that dazzled in series 2 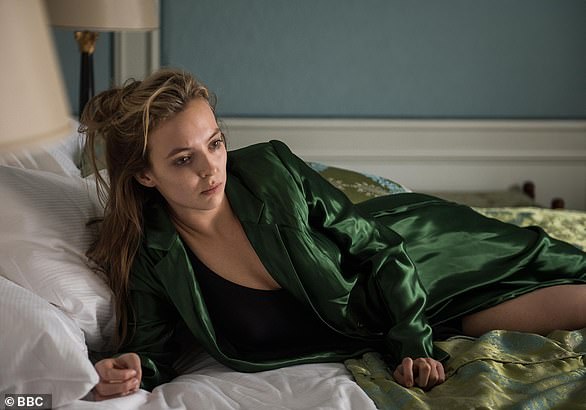 Jason Wu: One episode sees Villanelle in a £2,355 green satin coat by Jason Wu, a label beloved by high profile women including the Duchess of Sussex and Michelle Obama

The slinky green coat on Net-A-Porter’s sister site The Outnet, pictured. The stunning statement piece completes any evening look but Vilanelle wore it to lounge around 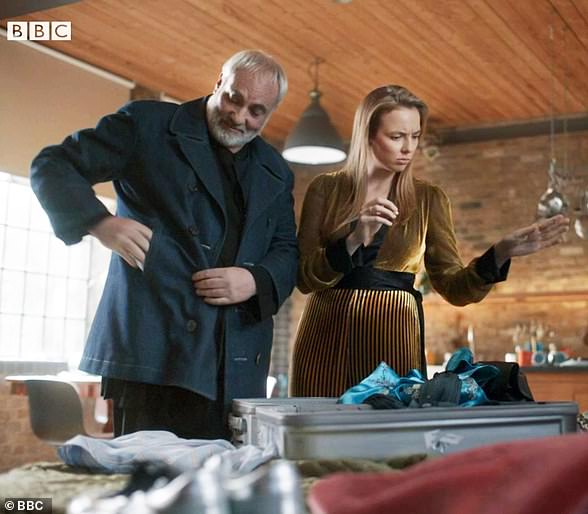 The Seventies inspired claret and gold creation, as seen on the DVF website, is now on sale 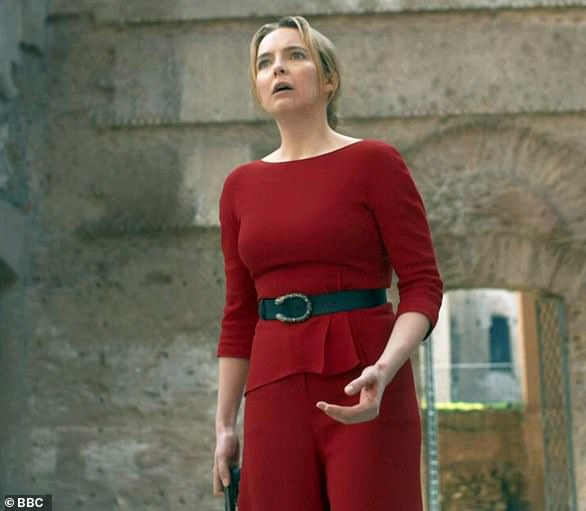 Jodie sports an eye-catching peplum top and trousers by Lanvin, with a total price of £1,999. She accessorises it with a £511 Gucci belt

The Lanvin top, seen left and right, was paired with red trousers by the designer (as seen left) for ultimate impact on screen 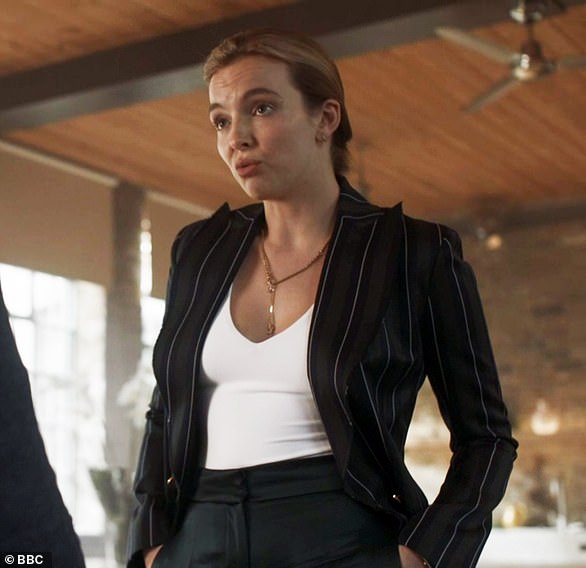 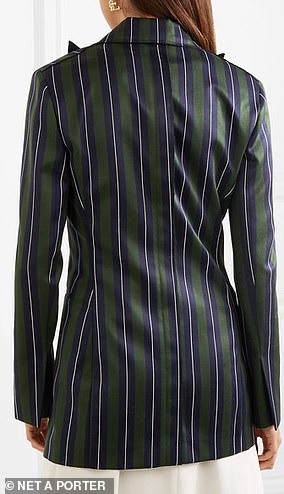 The preppy style, pictured. was given a villainous twist for by Killing Eve’s wardrobe team 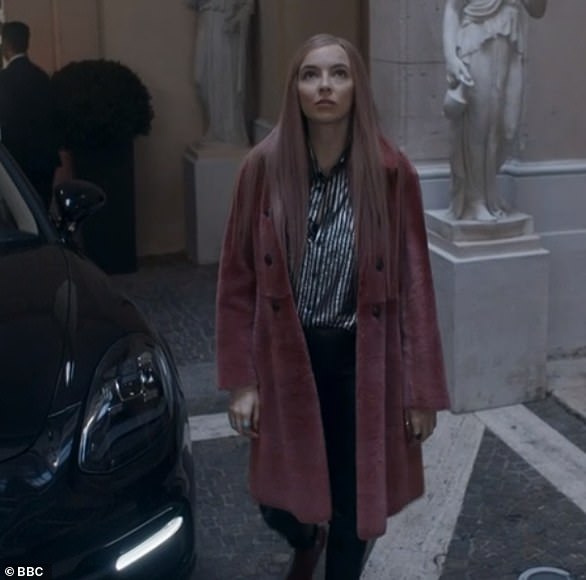 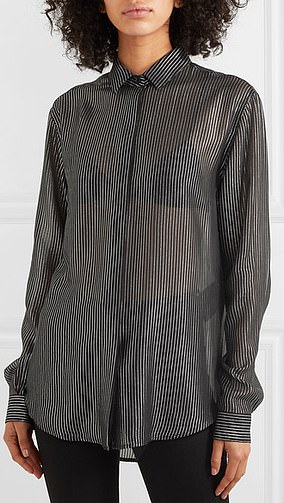 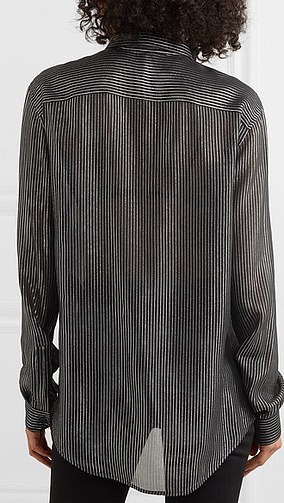 Luckily for fashion fans, this metallic piece is still available to buy on Net A Porter, pictured 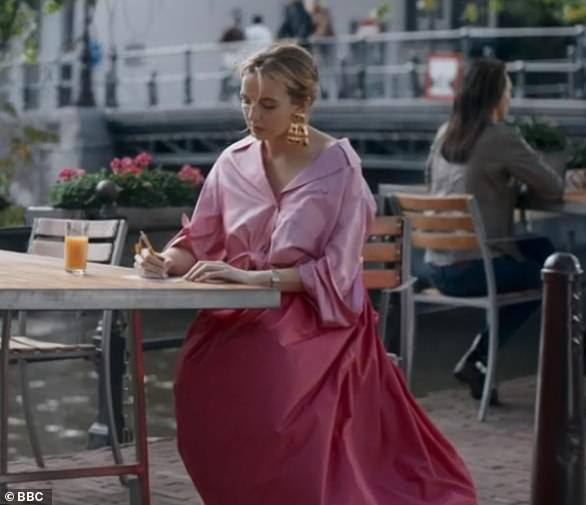 Villanelle writes postcards in Amsterdam in episode four while wearing a £1,942 Rosie Assoulin blouse, teamed with a 1978 fuchsia taffeta skirt and 1980s Christian Lacroix earrings. The ensemble was designed as a nod to the pink Molly Goddard dress in season one 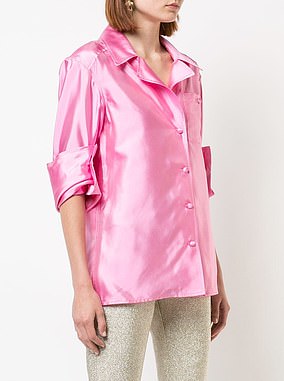 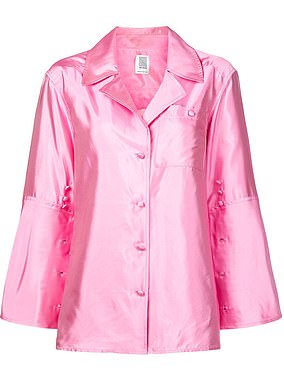 The £1,942 Rosie Assoulin blouse, pictured left and right, is still available on Farfetch 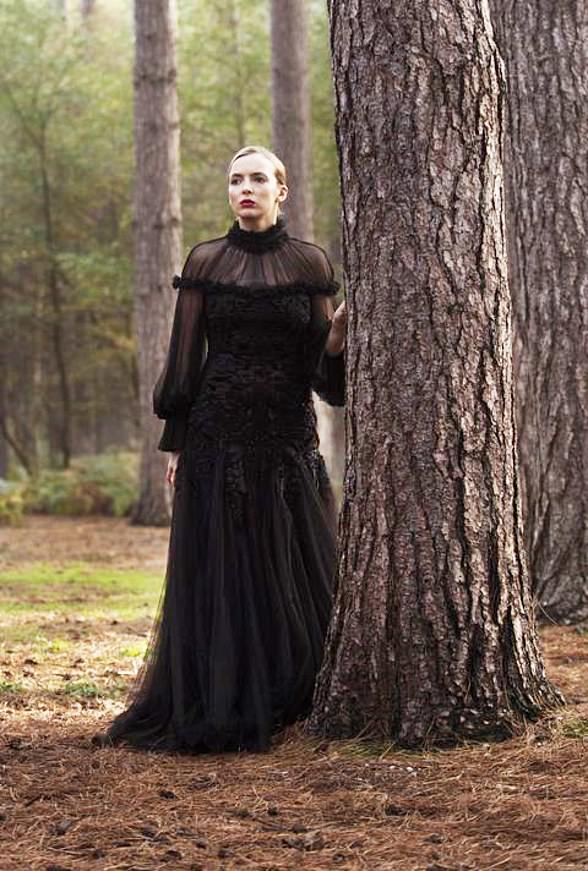 Eve, fails, killing, series, three
You may also like:

What will open tomorrow? From beauty salons to tattoo studios