Future Queen in training! Princess Leonor of Spain, 13, is joined by Queen Letizia and King Felipe and her lookalike sister Sofia, 12, to meet winners of an award bearing her name

Princesses Leonor and Sofia of Spain made a scene-stealing appearances alongside their father King Felipe and their glamorous mother Queen Letizia today.

The royal sisters, aged 13 and 12 respectively, joined their parents at a reception with the winners of the Princess of Asturias Awards in Oviedo, Northern Spain.

Sharing its name with Leonor, who is heir to the Spanish throne and holds the title of Princess of Asturias, the annual awards are presented to individuals or organisations who make notable achievements in the sciences, humanities, and public affairs. 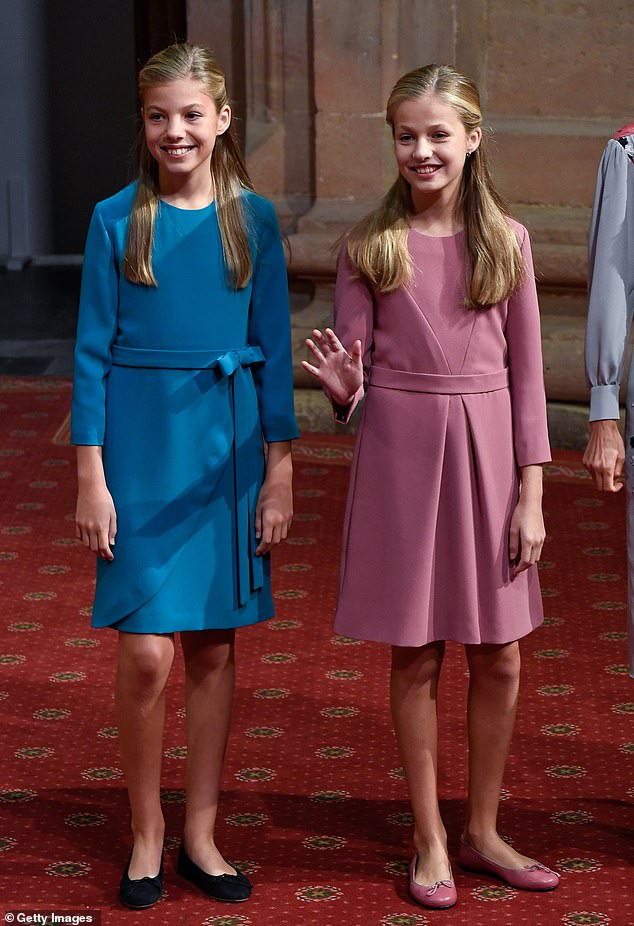 Princesses Leonor of Spain, 13, was a vision in a smart blue dress as she was joined by her younger sister Sofia, 12, at the Princess of Asturias Awards in Oviedo, Northern Spain 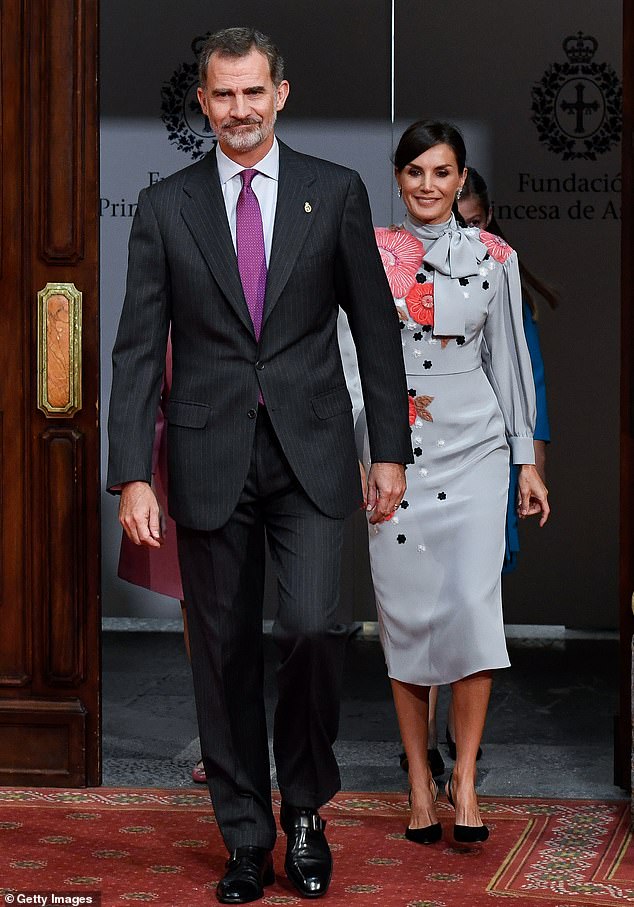 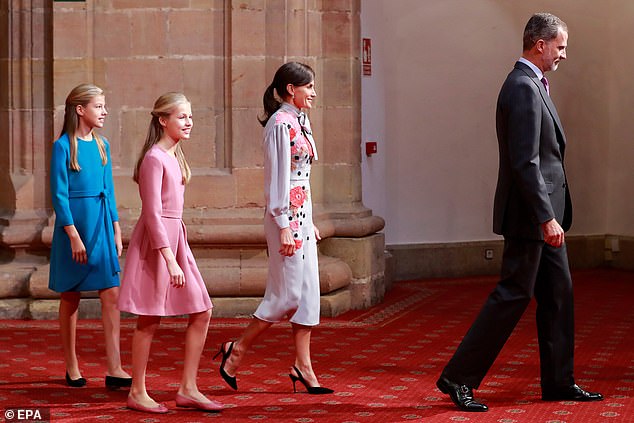 The royal sisters, aged 13 and 12 respectively, joined their parents at a reception with the winners of the Princess of Asturias Awards in Oviedo, Northern Spain

Her younger sister was the picture of poise, despite her tender years, in a blue long-sleeved dress with a bow detail.

Proud mother Letizia looked effortlessly elegant in a sophisticated, baby blue dress with vibrant floral detailing running along her side.

The former journalist, who was born in Oviedo, was the queen of fashion once again, as she teamed her knee-length frock with black high heels. 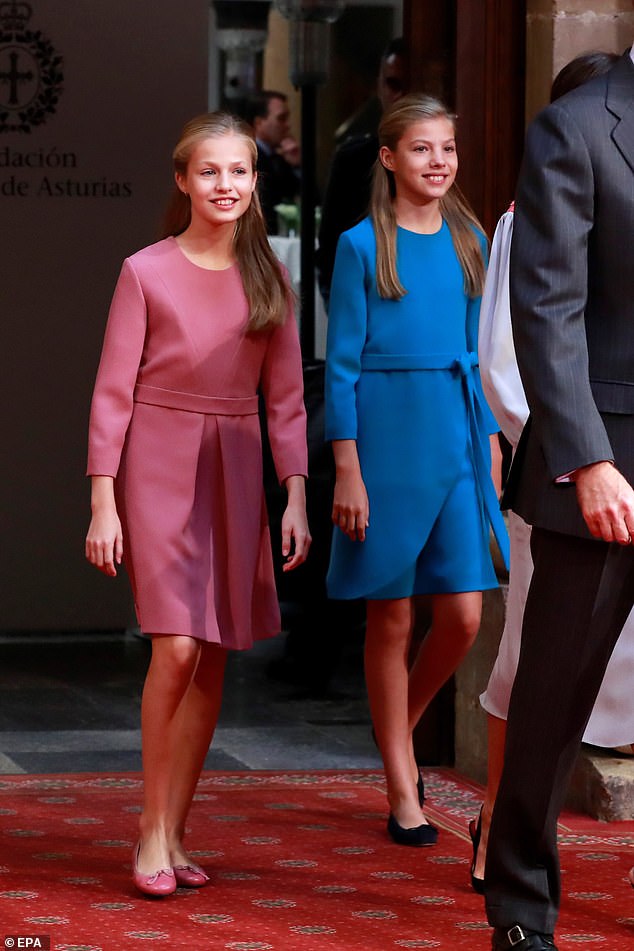 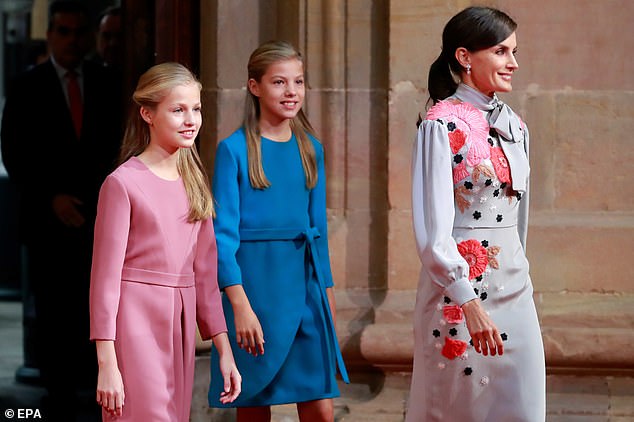 Her younger sister Sofia (pictured centre) was the picture of poise, despite her tender years, in a blue long-sleeved dress with a bow detail

She completed her look with dazzling drop earrings, while wearing her brunette hair in a sleek up-do and opting for light blusher and lipstick for her outing.

King Felipe looked smart in a black suit and purple tie as he guided his family to the reception.

Leonor, who will one day be Queen of Spain, and her younger sister, are largely protected from the limelight by their parents and make just a handful of appearances throughout the year.

They are usually photographed ahead of the family’s annual summer break, and occasions such as Easter Sunday. 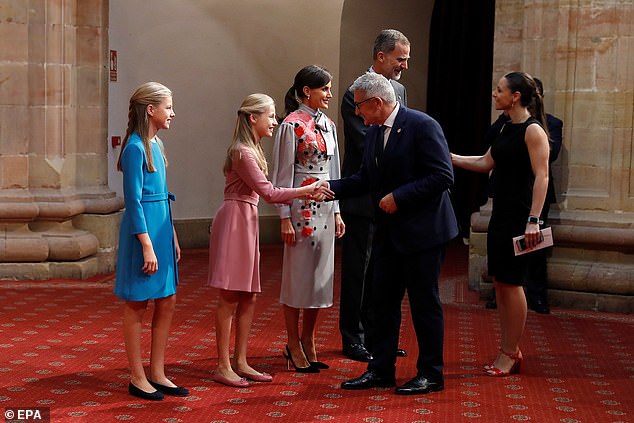 King Felipe, Queen Letizia and their daughters greet the guests during a reception held for the Princess of Asturias Awards

However, Leonor got a taste of her future royal life when she delivered her first public address in October 2018.

She joined her father at an event marking the 40th anniversary of the constitution in Madrid, and confidently read the first of the 169 articles of Spain’s Magna Carta.

The Princess of Asturias Awards was established in 1980 by Felipe, who was then heir to the throne, before he ascended the throne in 2014.

The event was established to consolidate links between the autonomous community Principality of Asturias and the King, as well as to encourage scientific, cultural and humanistic development.

Each year the recipients of the awards receive a sculpture created by Spanish prestigious sculptor Joan Miró.

And, Felipe, King, Letizia, Queen
You may also like: