Current owner Simon Karis, who bought the Brunswick Street, Fitzroy, store in 2010, cited a mixture of personal issues, business pressure and a desire to go out "with positivity" as reasons for the closure.

"Just hitting a button to end things is surreal," said Mr Karis, who will close the store on March 13. 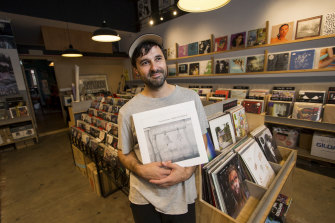 Owner of Polyester Records Simon Karis. The store in Fitzroy is closing its doors after nearly 40 years.Credit:Paul jeffers

The store began in 1981 as Dizzy Spinners,before it was bought by long-time owner Paul Elliot in 1983.

Mr Elliot added books from his personal collection to the shelves, before he moved the record store down the street. Polyester Books and Polyester Records were born.

The bookstore gained notoriety for its sexually explicit signage that depicted two female cartoon characters in an S&M scene.

The former bookstore became the regular target of vandals who took issue with Mr Elliot's radical wares, and it was the subject of police raids in 2000 and 2005 for stocking drug-related and X-rated material.

Both Polyester Records sites were host to regular instore performances, with Mr Karis saying they were an "important touchstone for local music".

Polyester’s closure might come as a surprise in the wake of predictions vinyl will outsell CDs for the first time since 1986, but Mr Karis believes the vinyl revival has peaked.

"I hate to sound catastrophising but you’d be lying if you said it hadn’t peaked," he said.

"The idea that it [vinyl] came back was pretty reliant on it being appealing to a couple of new generations, but I don’t know if that's just going to keep happening to new generations."

"It’s really important to not judge people for wanting immediate music delivery. I’ve always hated the idea that the record store guy hates Spotify … as much as it’s a deeply flawed business venture for artists," Mr Karis said. "The freedom of trade is an impossible battle.

"The cool thing about records though is, especially because no one wants to have a giant record collection these days, it focuses your listening a little bit. If there’s only 200 records you really love, and you have them all on vinyl, that’s a beautiful thing."

Mr Karis plans to celebrate the store's rich and eclectic history with events over the next three weeks.

"You can expect some names from our deep past and some current faves, parties and live performances," he said.

"It’s good to try to commemorate how great it has been in the past and how great it can be to send it off with a bit of positivity rather than 'another one bites the dust'."

Citys, groove:, losing, the, viny
You may also like: