They are the objects of desire for cereal-loving youngsters and sweet tooths (teeth?) of all ages, and the fever dream of cartoon leprechauns everywhere: Lucky Charms cereal. The pastel-colored, fairytale breakfast is in a league all its own, mostly because of its most central ingredient. Lucky Charms marshmallows are a sweet, crunchy, culinary masterpiece. Devoted fans have spent hours separating the marshmallows from the cereal pieces, but soon a lucky few will get their hands on an elusive box of Lucky Charm Marshmallows.

News of reintroduction of the Lucky Charms Marshmallow-Only boxes came on March 18, revealing that for the first time since 2017, fans will be able to get their hands on this box. In fact, Lucky Charms is planning to give away a whopping 15,000 boxes of it to lucky winners nationwide. If that’s not exciting enough, the packages of Lucky Charms marshmallows will be looking extra magical, with solely rainbow and unicorn pieces included in the mix.

Best of all, per the press release, for the first time ever, winners "will receive membership into the first-ever, elite ‘Lucky Charms Marshmallow Only Club’." The club is intended for only the most devoted of Lucky Charms marshmallow fans. Could you be one? 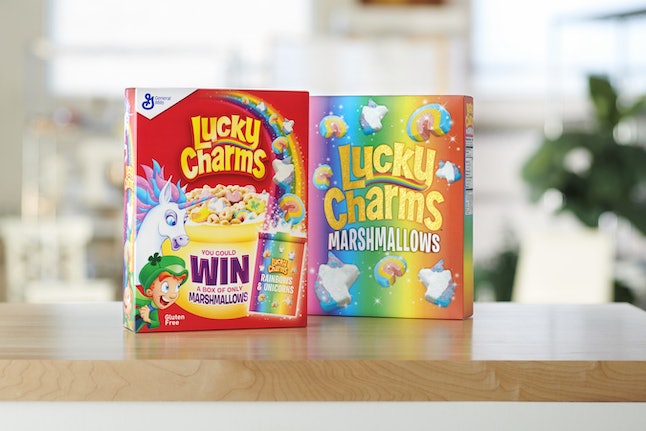 If you’re in the market for a box of rainbow and unicorn marshmallows, look no further than the cereal aisle. For your opportunity to win one of the 15,000 boxes of marshmallows, all you need to do is find one of the specially-marked cereal boxes pictured above, while will be available in stores nationwide through Summer 2019. Once you grab one of these boxes (and enjoy the contents inside), don’t recycle it right away — you can enter the code found on the inside panel at MarshmallowOnly.com to reveal if you’ve won. If you’re a lucky winner, you can get give them your address and have the elusive box of rainbow and unicorn marshmallows shipped right to you.

In addition to the cereal, the boxes themselves are pretty darn special. As you can see in the photo above, General Mills is clearly going for a magical look with a box completely covered in rainbows and sparkle graphics. You’re going to want to save it after the marshmallows are gone.

It should be noted this is not, in fact, the first time Lucky Charms marshmallows have been available independent of their complementary cereal pieces. In 2017, Lucky Charms ran a similar contest, also awarding winners boxes of just marshmallows. But, there were a few key differences then. First of all, last time around, all of the styles of Lucky Charms marshmallows were included in the boxes. This time there’s a clear whimsical, magic feel to the marshmallow lineup. but, most importantly, there were only 10,000 boxes up for grabs in 2017 — that means 5,000 more marshmallow dreams can come true this time around.

Before you head to the store to stock up on cereal, it may behoove you to check out the ~official~ rules, which also offers an alternative method of entry beyond purchasing a box. In the meantime, happy marshmallow-diving, everyone!

8 Best Christmas light projectors for 2021: from snowflakes to funky designs

Can you get chickenpox twice, how long does it last, what are the symptoms and can it lead to shingles?