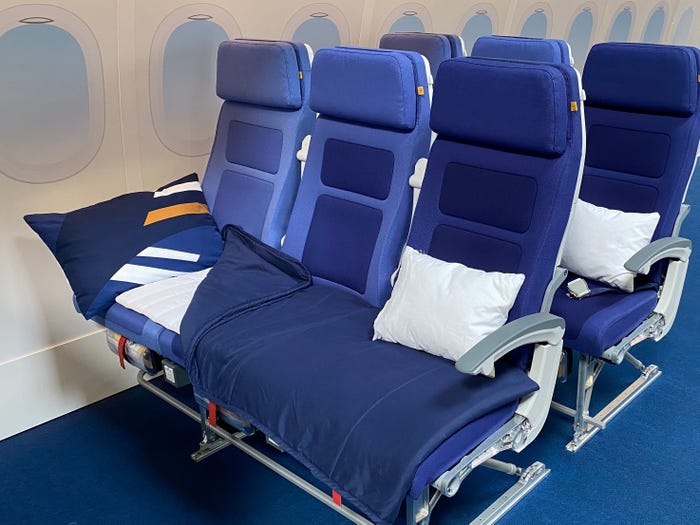 If you struggle to sleep in economy plane seats but can't quite stretch your budget to business class, good news: Lufthansa is trialing a new concept that will allow people to book a whole row so they can lie down.

The so-called Sleeper's Row upgrade is set to give long-haul flyers three to four seats to themselves, complete with a mattress topper for comfort.

You'll also get business class amenities such as a higher-quality cushion and blanket as well as pre-boarding.

The concept is currently being trialed on long-haul flights between Frankfurt and Sao Paulo, and passengers can purchase the upgrade at check-in or at the gate, rather than needing to book in advance. The rows are available on a first-come, first-served basis.

In the trial, which began on November 18 and will run until mid-end December, the Sleeper's Row upgrade costs $260 one-way.

Considering the drastic price hikes between Lufthansa's travel classes, it's likely the Sleeper's Row will be popular for those who just want to be able to lie down and aren't concerned about champagne or fancy food.

However, it could be bad news for economy travelers who usually try and get a row to themselves simply by moving when boarding is complete.

Lufthansa said it hopes to roll out the offer to more destinations depending on customer feedback.

It's not the first airline to explore offering economy travelers the opportunity to lie down properly though — earlier this year, Air New Zealand announced plans for pods with beds, as Business Insider's David Slotnick reported.

And in July, aerospace designer Zephyr unveiled a new double-decker layout that would allow economy passengers to lie flat.

7 days of Prizes! Win a FREE gym kit from Superdry on day 4 of our OK! VIP Club competition special