Follow
Home » Lifestyle » Man transforms his home into a lush 'jungle' after spending $50,000

Man transforms his home into a lush 'jungle' after spending $50,000

Plant-obsessed designer, 25, shows off his spectacular jungle home filled with $50,000 worth of greenery – and a bathroom oasis most can only dream of

A fashion designer has transformed his home into a luscious green ‘jungle’ after years of collecting rare and unusual plants.

Adam Lin, from Melbourne, now owns more than 300 plants worth over $50,000 and says his love for indoor gardening blossomed in 2016.

The 25-year-old – who’s behind the popular Instagram page Thirsty Plant Baby – has since decorated every space with a plethora of potted and hanging greenery.

‘When I see an empty space, I immediately have a vision of how it would look like when it’s filled up with plants, it has certainly become an instinct when it comes to that,’ Adam told Daily Mail Australia. 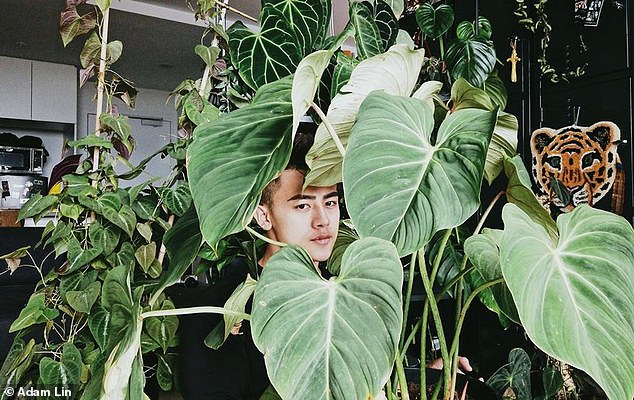 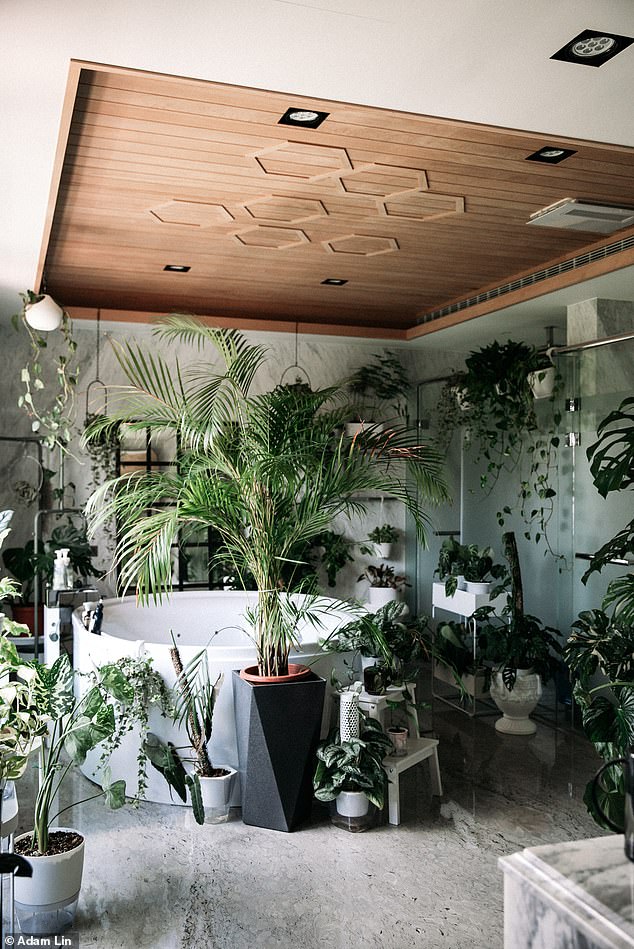 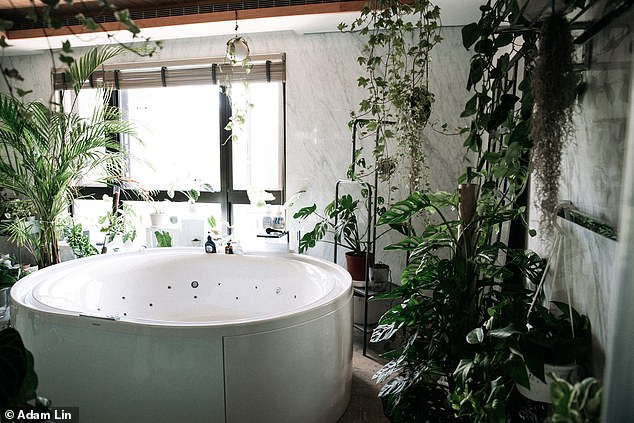 The indoor plant enthusiast said his collection started growing four years ago after he stumbled across a YouTuber who spoke fondly about her plants.

‘And the obsession hasn’t stopped since,’ he said.

His indoor plant sanctuary has brought a source of great joy into his life.

‘I get anxiety quite often so gardening has helped me through that, it brings me calmness and some peace I need during the hard times,’ Adam said.

‘Also watching a new leaf unfurl is one the most satisfying things.’

One of Adam’s most spectacular makeovers is his family’s bathroom in Taiwan where he recently transformed into a luscious jungle bathroom of his dreams.

‘When I first stepped into the bathroom of my family’s newly built house, it didn’t take long before a jungle bathroom was born… two months later,’ he said.

‘My favourite spot is definitely the giant bath in there, I haven’t showered in the standing shower for about three months since I started bringing all the plants in.’

2. Check out Facebook marketplace and Gumtree for some local goodies

3. Hacking items from big stores like Ikea, Kmart or Target. Hack them, decorate them so they don’t look like your neighbours.

Adam – who splits his time between Australia and Taiwan – revealed he has splurged tens of thousands of dollars on more than 300 plants for his city apartment in Melbourne and his parent’s home.

‘I have spent more than $50,000 on them as I have got into the rare tropical plants realm,’ he said.

‘I normally get my rare plants from small local nurseries or trade with plant collectors.’

When he’s away from his apartment, Adam said he has a professional plant sitter who looks after his ‘babies’. 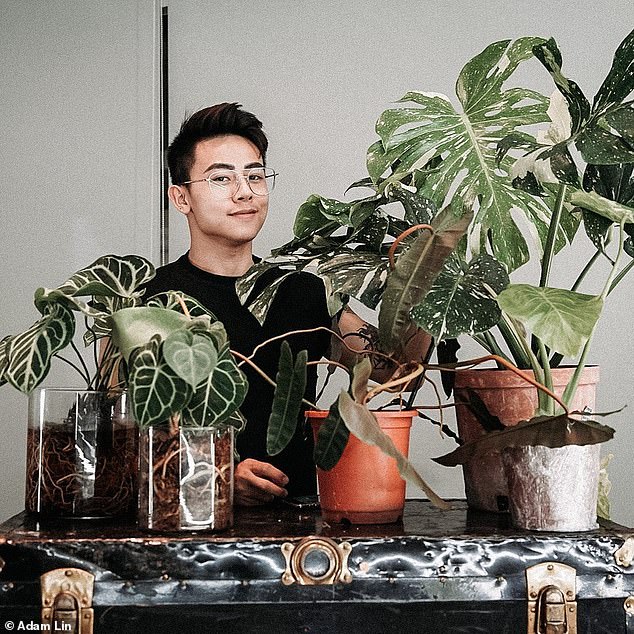 Adam said he spends around two to four hours maintaining the plants every two to three days during summer and in winter, about one to two hours once every seven to 10 days. 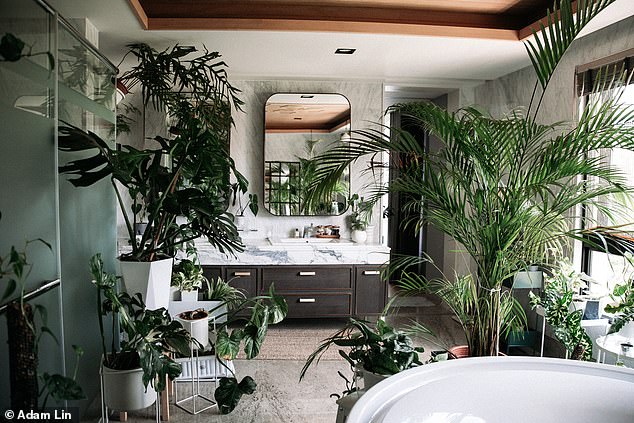 Despite having hundreds of plants under his roof, Adam explained how he doesn’t have a watering schedule in place as every plant is different

Despite having hundreds of plants under his roof, Adam explained how he doesn’t have a watering schedule in place as every plant is different.

‘Every plant requires different watering times so checking your plants on a regular basis is more ideal,’ he said.

‘I spend around two to four hours maintaining them every two to three days during summer and less in winter, about one to two hours once every seven to 10 days.’

To create the ultimate green haven in your home, Adam suggested bathrooms are a great place to start your collection.

‘Bathrooms are a good place to keep your indoor plants if they have the right lighting and air flow because it is likely to be more humid than any other rooms in your house,’ he explained. 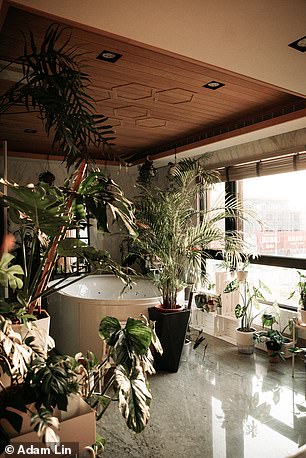 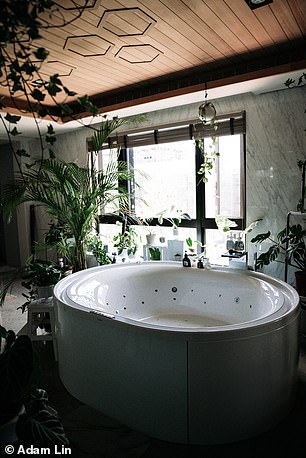 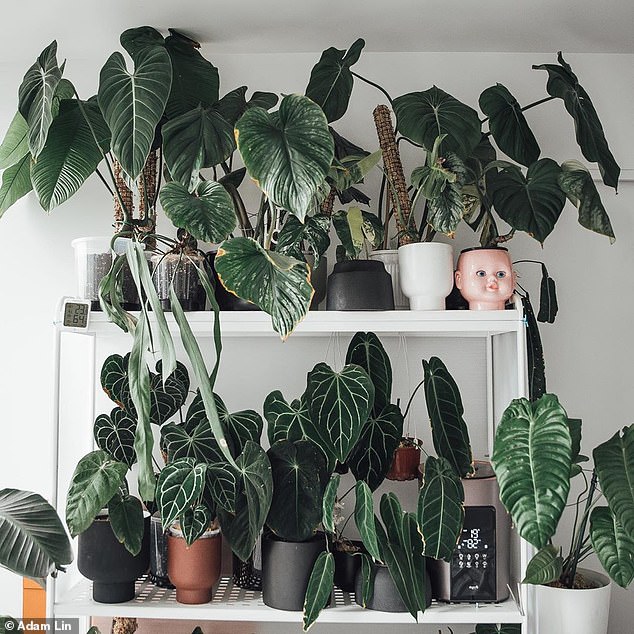 For beginners, Adam said you also need to understand the conditions inside your home

For beginners, he said you also need to understand the conditions inside your home.

‘Knowing the lighting condition and humidity is very important, something you should know before you go and purchase plants,’ he said.

He urges plant lovers to buy large foliage plants to ‘create a focus point’ instead of having a ‘bunch of smaller ones as it mostly will look chaotic’.

‘Also combining non-plant decorative items with plants can create more of a sense of personality and warmth,’ he suggested.

‘Embrace the negative space, not every space needs to be filled up with things or plants. Give your eyes some space to rest.

Adam added: ‘If you don’t know where to start, try your local nurseries, as they will have plants that will thrive in the area you are living in and they can also give you advice on what plant to start with.

‘Also supporting your locals is awesome.’ 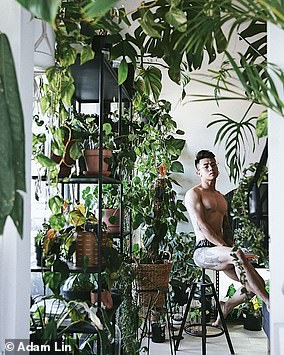 Not planning thoroughly: I did that too when I got too excited and then I end up running back and forth to the stores.

Not knowing what lighting and humidity condition you have at home: Plants will normally look pretty as they are for one to two months. But they would start to look worse and worse until you replace them as they are not suitable for the spot you put them.

Plants are not perfect, they are living objects: In saying that, they will change with time and not looking like they were when you first bought them.

a, His, home, Into, man, transforms
You may also like:

Players kneeling for anthem booed before MLS game in Texas