We’re taking back the barbie! Sick of men hogging the grill? Meet the chef with a burning ambition to teach women the lost art of ‘fire cooking’

Rain is lashing down, smoke stings my eyes and flames and ash swirl all around. But this isn’t the set of a disaster movie — I am braving the elements in a Bristol back garden to ensure the perfect cooking of a rotisserie chicken, spiced dhal, salmon and a bread-and-butter pudding.

I’ve lost count of the number of heat sources on the go, but there’s not a disposable barbecue or ordinary kettle barbecue in sight. Instead, we are cooking on gadgets that include a vast £13,000 Argentinian-style grill (an open grill with a spit) and a fire table and chapa (metal plate for cooking).

Darting between these, like the mad conductor of a fire orchestra, is Genevieve Taylor, 46, the founder of Bristol Fire School.

‘This is proper roughing it,’ she shouts gleefully over the deluge. 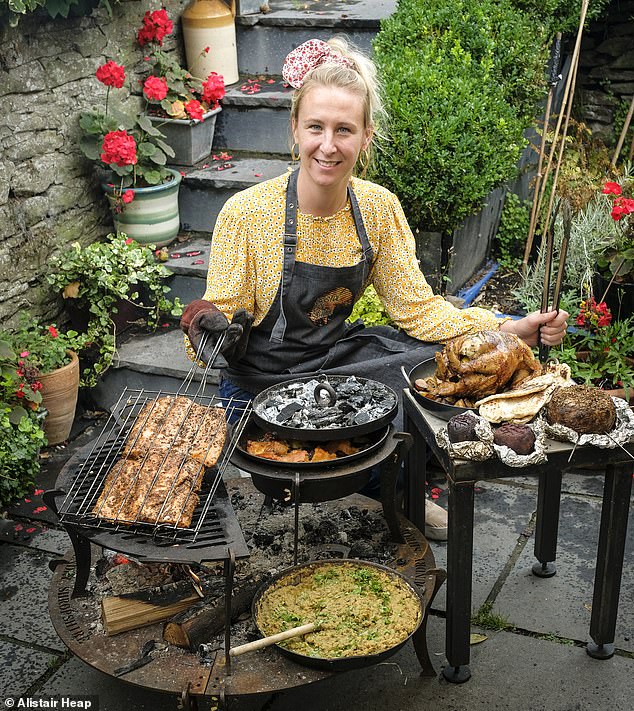 Before today, the closest I’d been to a BBQ was to hand my husband a beer while he turned kebabs on ours.

I’m ashamed to say that BBQing — or ‘fire cooking’, as aficionados call it — is not something I’ve embraced. I’d like to blame the patriarchy for grabbing the metaphorical bull by the tongs but, really, the fault is my own — there is always something quicker, easier, hob-friendly or (sorry) microwavable to cook.

Plus, it’s just such a — well — off-puttingly alpha-male arena.

So thank god for Genevieve. As a live fire and BBQ expert (and teacher), she is one of a growing breed of women keen to reclaim the barbecue from the macho sausage-wavers.

This year she has started doing coaching days devoted to smoking and charring good ingredients. While she doesn’t offer women-only classes, she makes it clear that ‘this is a woman-friendly space’.

So far, the gender split has been half-and-half and the courses are so popular that she is adding days to keep up with demand.

‘The feedback has been brilliant,’ she says. ‘Fire cooking is not a man’s thing. For years it has been male-dominated but fire is an original cooking tool that was used by women many thousands of years ago.

‘This comes naturally to us. We are still brilliant at it because you have to be good at multi-tasking. You have to be able to do six things at once —and sorry, boys, but we are better at that than you.’ 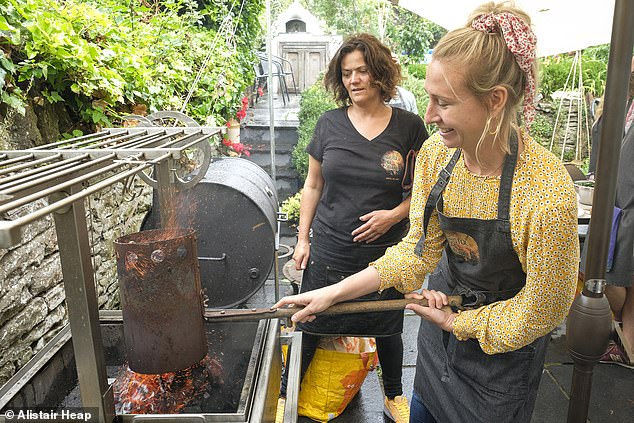 Genevieve (pictured, with India) explained that lighting a wood fire by starting tiny with kindling is too much fiddle and faff

1 Fire plate, from £59.30, netherton- foundry.co.uk: Build a fire on it to save your lawn or underneath to use it as a cooking plate. The iron is pre-treated with naturally non-stick flax oil.

2 Kamado Joe, £495, gardenbox.co.uk: This is the king of charcoal grilling (and an update on the Big Green Egg). Slow-cook, smoke and control everything, from heat and air to distance from fire.

3 Natural firelighters, £19.95 for 250, lektowoodfuels.co.uk: Made from wood shavings and paraffin wax. Nothing synthetic, no nasty smells.

4 Kiln-dried logs, £10 for 8kg, whittleandflame.co.uk: Small, split and dry as a bone. Grown in British forests, sustainable and responsibly managed.

5 Charcoal, £15 for a 4kg bag, whittleandflame.co.uk: Exceptionally pure charcoal made in the UK.

Why, then, does she think BBQing has become such a male space?

‘My theory is it’s about sex and attracting a mate. Working a fire is like fluffing your feathers. It’s also a nice place to hang out with your mates with a beer. And it’s escapist — that’s certainly why I like fire cooking, so I can get out of the kitchen.’

Of course you can’t have a fire to cook on without lighting it first, but apparently this is something most of us do wrong.

‘You probably learnt to light a wood fire by starting tiny with kindling, newspaper and a match and adding bigger bits to build it up,’ Genevieve says. ‘I find that far too much fiddle and faff.’

Instead, we are taught to put a layer of big logs at the bottom, medium logs stacked on top like Jenga, then smaller logs, then kindling and finally a firelighter made from wood shavings and wax on top.

When using charcoal, you just follow the normal method of putting firelighters underneath and chucking it in. 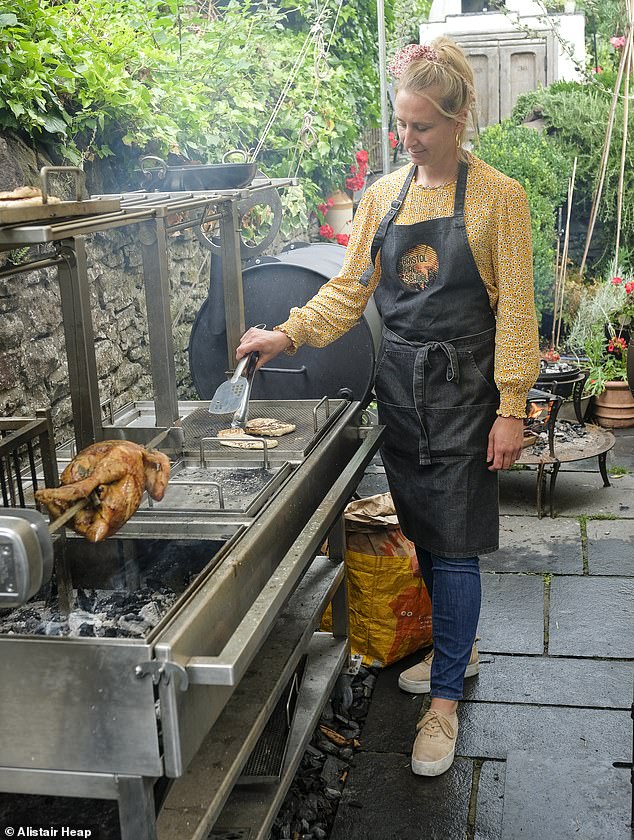 India (pictured) revealed that most of the 100,000 tons of charcoal the UK imports each year comes from rainforests in South America and Africa

Genevieve explains that pure charcoal creates almost no smoke, no smell and a consistent high heat (two to three times hotter than wood) — great for cooking pork shoulders or legs of lamb.

Wood adds a delicious smokiness that’s good for meats such as brisket and earthy vegetables. You can use a combination of both when you want both qualities.

But most of the 100,000 tons of charcoal the UK imports each year comes from rainforests in South America and Africa. Ironically, suppliers add fire suppressants to the charcoal because, in the right conditions, it self-combusts.

You don’t need to wait until it turns white to start cooking, as there are no impurities to burn off.

So, would a gas barbecue ruin the experience?

‘No, absolutely not,’ Genevieve insists. ‘There is snobbery about gas but it’s foolproof and gets you out of the house.’ 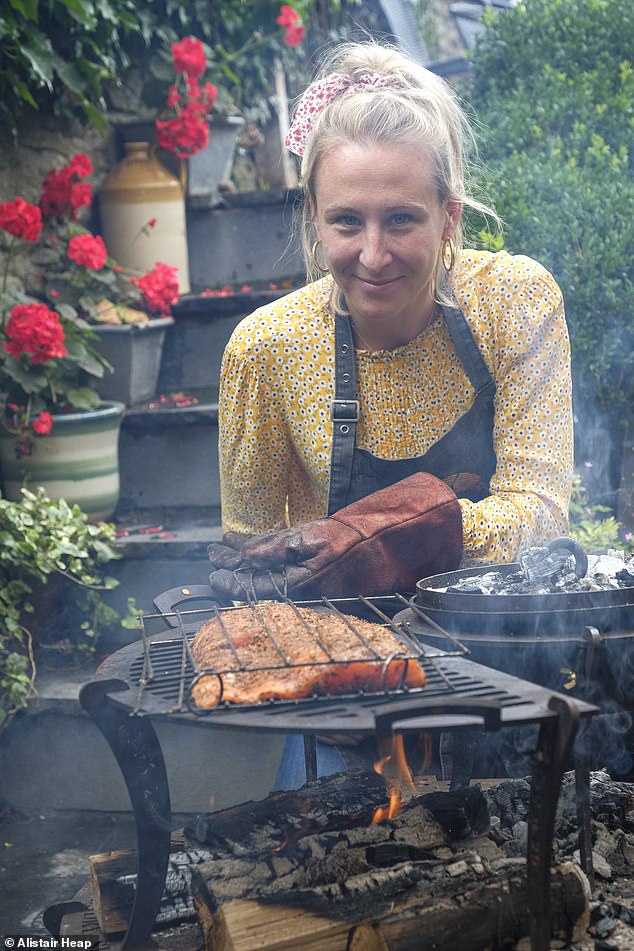 She says the general rule for getting the most flavour from gas is the same as for charcoal and wood: cook things slowly, at a low temperature, for longer. Low and slow is her mantra.

Genevieve wants to broaden our horizons about what you can cook on fire. It’s not all charred sausages and undercooked chicken legs. Today we slow-cook a whole celeriac, basted in coriander oil, for almost four hours.

Spiced dhal, I learn, is easy peasy to do in a pan on a BBQ and a brilliant accompaniment to kebabs. And who’d have thought you could cook bread- and-butter pudding on a fire, too, tucked away inside a Dutch oven (basically a heavy-duty iron casserole with a flat lid to heap coals on)?

There is something to be said for slow outdoor activities that don’t rely on technology, now more so than ever. And precise timings are out, too. Fifty times Genevieve reminds me that ‘it’s done when it’s done’.

A temperature probe helps. Chicken is safe to eat at 73c, ground beef at 71c and fresh lamb, beef and veal at about 60c. For everything else it’s sight, touch, smell and taste. 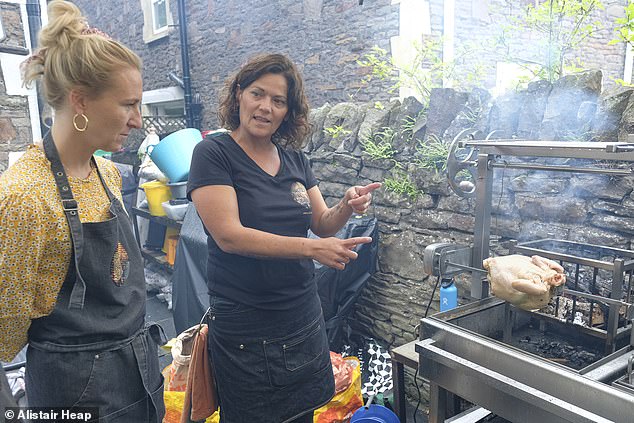 Genevieve (pictured, with India) explained that it’s fundamental to learn how to create heat zones to become a better barbecuer

We learn that the best BBQ-er cooks off direct heat 70 to 80 per cent of the time. That could mean towards the edges of your BBQ rather than in the centre, or you could choose to heap the coals to one side of your BBQ and leave the other empty.

‘Learning to create heat zones is fundamental to becoming a better barbecuer because you haven’t got that ability to turn your hob up and down for temperature control,’ says Genevieve.

The most pleasing revelation of the day is just how easily cooking with fire comes to me. It feels instinctive and rhythmic — so long as I keep my eye on the fire. And later that weekend I take charge of our BBQ at my mother-in-law’s — I don’t burn anything, the chicken is beautifully tender and I get to dodge boring salad-making.

Lauren Wilson, 38, from Bakewell in Derbyshire, agrees. Lauren, who has four-year-old twins, runs a deli and cafe in the Peak District with her husband Ralph.

This is her second time on a BBQ teaching course and it inspired her buy a fire table and grill, which differ from ordinary BBQs in that they are open and without sides.

‘Oh my god, the kids love it,’ she says. ‘I’ve been on it non-stop. I do whole sea bass, salmon and trout. We even do breakfasts on there.’ 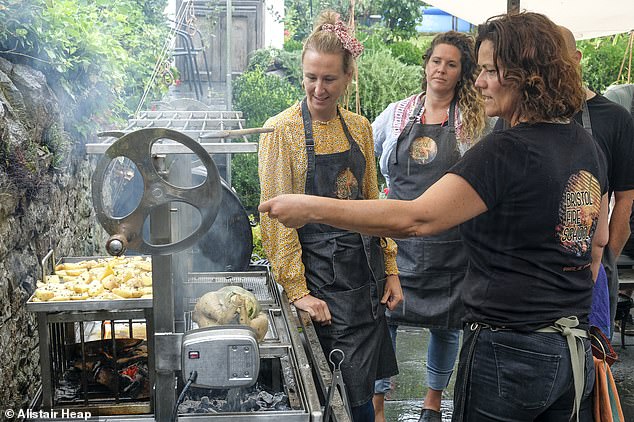 India said she didn’t waste any time in telling her husband where he has been going wrong all these years. Pictured: India Sturgis being taught how to cook barbecue

Will she be vying with her husband for its captaincy? Lauren laughs. ‘When we got the fire plate my mum said, “Make sure you let Ralph do something on it.” I did — but there are only four meals he can make, all of them on a hob.’

Now Lauren hosts socially distanced gatherings for friends around her fire plate and chapa with a paella bubbling on top.

Genevieve started out as a BBC natural history TV producer. Having children — a son, now 15, and a daughter, 12 — meant a career rethink and she started making and selling sauces, jams and chutneys.

After stints setting up a catering company and working as a food stylist, she began writing cookery books. Six years ago she relearnt the joy of outdoor cooking and started teaching people to ‘Do Fire Better’.

Lunch prepared, we all settle down to devour the food. The taste is so far away from kitchen cooking. The smoky, charred softness is deliciously complex.

The bread-and-butter pudding is softer yet less soggy than any oven-cooked variety I’ve tried and falls apart in the mouth.

I cannot believe I’ve wasted so many years indoors.

I resolve to waste no time in telling my husband where he has been going wrong all these years and that he will have to fight me for the tongs in future. 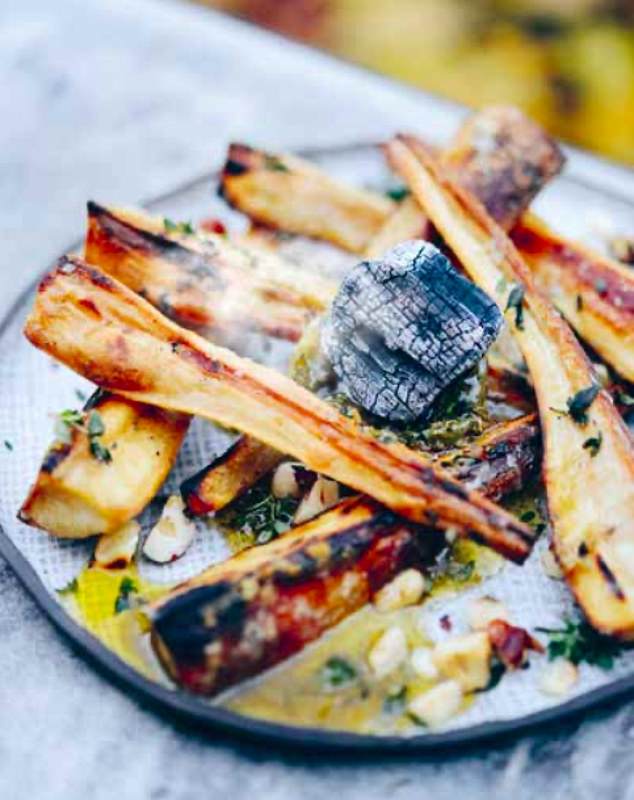 Taken from Genevieve’s book Charred, about vegetable grilling and barbecuing.

For the fennel butter

Fire up the barbecue. Once it’s hot, throw on some smoking wood chunks or chips and allow them to catch and smoulder.

Tip the parsnips into a fireproof roasting tin, drizzle with olive oil, season and mix. Rest tin on BBQ, well away from the hottest part. Shut lid. Cook for 45-50 mins, rotating the tin once or twice and tossing the parsnips. Add more wood chunks as needed.

Meanwhile, make fennel butter. Tip fennel seeds into a frying pan and set over a medium-high heat on a hob or BBQ to toast for two minutes. Transfer to a mortar and crush to a coarse powder with the pestle. Add softened butter and honey, season and mix. Set aside.

Once parsnips are tender, remove tin from BBQ. Sprinkle over the Parmesan and toss to coat. Remove parsnips one by one and rest them on the grill bars over the fire. Cook for 7-10 mins, turning until golden and crisp. Put on a plate. Scatter with hazelnuts and thyme. Top with dollops of butter, adding a few glowing coals to melt it if you like (see image). Serve immediately. 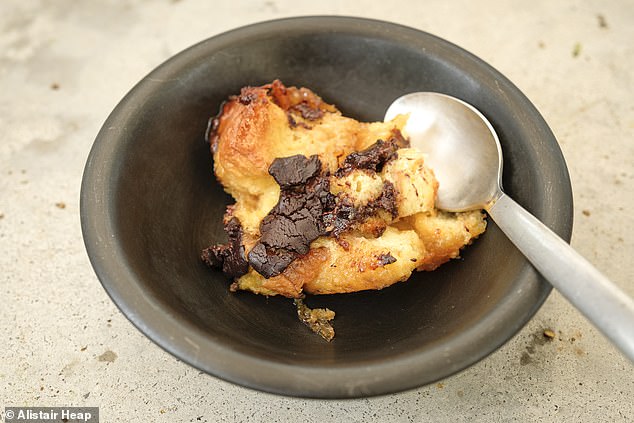 Bread and Butter Pudding (pictured) should be served piping hot

Scatter the brioche bits into the base of a butter-greased Dutch oven or old casserole dish. Dollop on teaspoons of marmalade, using half of what you have, and scatter over half the chocolate pieces.

Sprinkle on a tablespoon of sugar. Repeat with the rest of the brioche, marmalade, chocolate and sugar. Lightly whisk the milk with the eggs and pour into the tin. Cover with the lid of the Dutch oven and hang over any decent fire (not too close to the embers or the bottom will burn).

Use tongs to put 8-9 bits of glowing charcoal on top of the oven to cook the top. Bake for about 25-30 minutes until the custard has set and the top is crisp. Serve piping hot.

Chef, meet, t, teaching, the, Women
You may also like:

Get the new issue of Stylist Magazine

Woman who lost her hair bravely shows her bare scalp

State pension age to rise to 66 from next week