Meghan Markle Thinks Palace's Support of Kate Middleton After Negative Press Is a 'Slap in the Face,' Friend Claims

Meghan, Duchess of Sussex is reportedly upset about the way the palace supported Catherine, Duchess of Cambridge in response to a negative article written about Kate. According to a friend of Meghan’s, the duchess finds it to be a “slap in the face” because she was never defended the same way when the media scrutinized her. 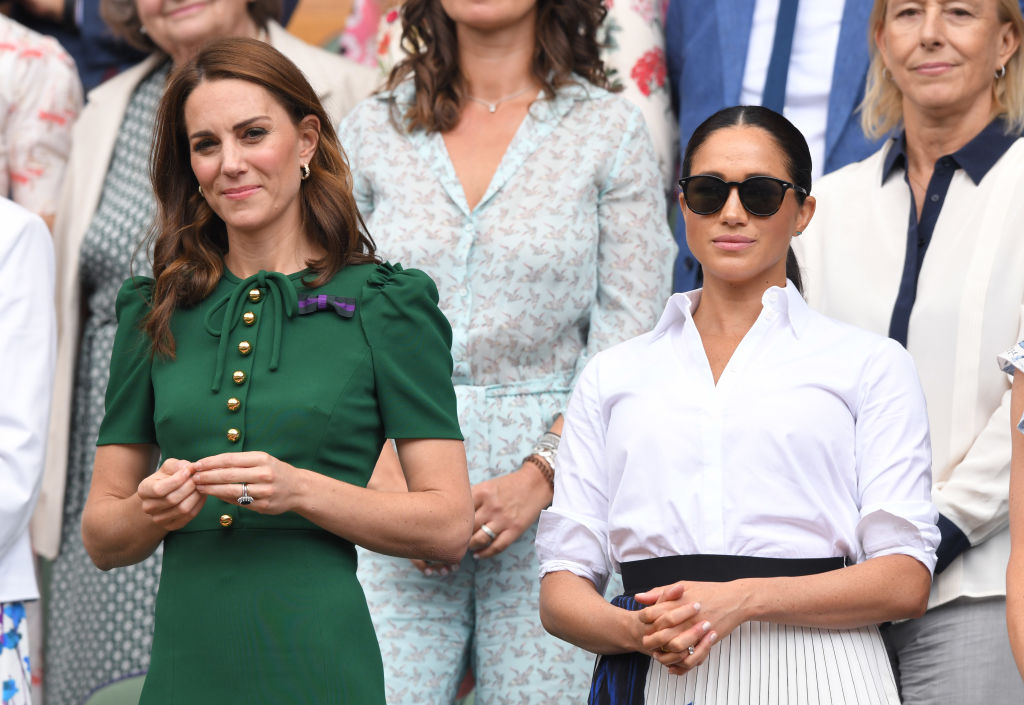 When a new article about Kate surfaced from Tatler, Kensington Palace was quick to react with a statement about “false representations” in the reporting.

The statement noted, “This story contains a swathe ofinaccuracies and false misrepresentations which were not put to KensingtonPalace prior to publication,” a palace spokesperson shared in astatement. Kensington Palace sent legal letters to Tatler to remove thestory from the internet as well.

Tatler, in response, shared their support of the reporting, with a spokesperson for the magazine telling ET, “Tatler’s Editor-in-Chief Richard Dennen stands behind the reporting of Anna Pasternak and her sources. Kensington Palace knew we were running the ‘Catherine the Great’ cover months ago and we asked them to work together on it. The fact they are denying they ever knew is categorically false.”

The article included claims that Kate feels “exhausted and trapped” because of her workload and touched on why her relationship with Meghan is fractured.

“We can confirm we have received correspondence from lawyers acting for the Duke and the Duchess of Cambridge and believe it has no merit,” Tatler said in a statement to ET.

Wishing a very happy birthday to The Duchess of Sussex today! 🎈

Friend claims Meghan is bothered by not receiving the same support

That support for Kate is a far cry from what Meghan experienced, as the constant media scrutiny was, in part, a reason why she and Prince Harry exited the royal family. A friend of Meghan’s told the Daily Mail that the duchess feels like the palace’s support of Kate is a “slap in the face.”

“Meghan said Kensington Palace never once came to herdefense when she was being shredded by the media. Now Kate gets a bit ofnegative press, and the palace comes out in less than 24 hours to rebuke theclaims made against her,” her friend explained.

The friend continued, “This is really a slap in the face forHarry because he repeatedly asked for an updated, revised media policy or atleast a conversation about his concerns. All fell on deaf ears and thenKate comes along, snaps her fingers and gets an outpouring of support.”

Did the lack of palace support lead to Megxit?

It all is “telling,” the friend claims Meghan said, explaining that the Sussexes’ exit was due to the “the lack of support and complete disregard for the pain and anguish Meghan suffered while being crucified by the media.”

“Meghan said rather than backing her, she was made to feellike she was asking too much, expecting too much, when all she wanted was supportfrom the powers that be,” the insider added.