Looking their best! Melania Trump wears heavy $6,000 LEATHER trench to unveil her ‘Be Best’ campaign in the D.C. heat, while Ivanka looks ladylike in a white bell-sleeve top and shades

Melania Trump put on a stylish display in a $5,990 leather jacket while launching her ‘Be Best’ campaign at the White House on Monday.

Although temperatures were in the high 70s, the 48-year-old first lady opted to wear a tan Ralph Lauren trench, pairing the heavy leather jacket with a white pencil skirt and matching Christian Louboutin pumps to unveil her long-awaited initiative focusing on the well-being of children.

Melania wore her highlighted brown hair loose around her shoulders, and she had a bright smile on her face as she addressed the audience at the event attended by her husband, President Donald Trump, and his daughter Ivanka. 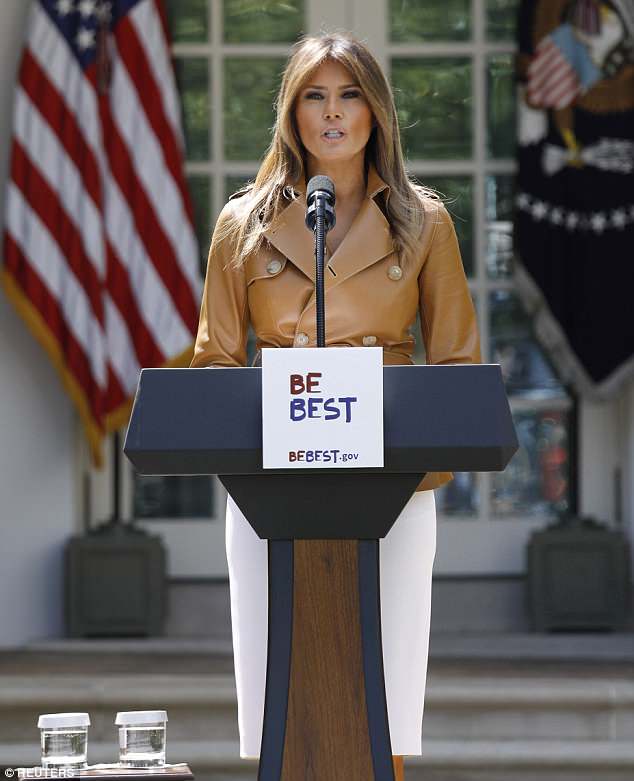 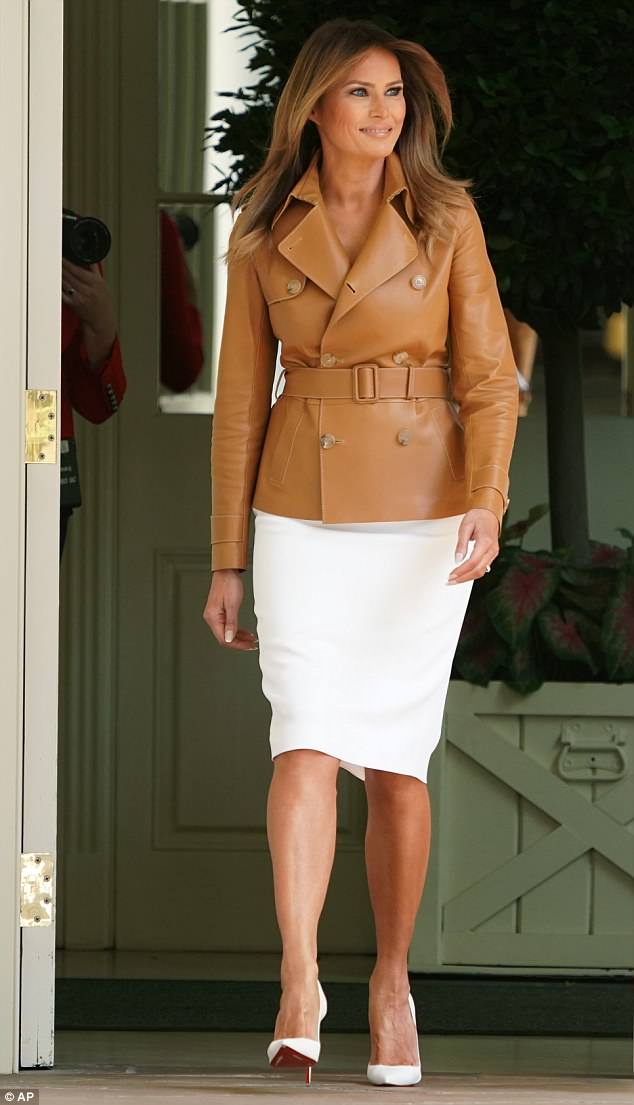 The first lady wore a $5,990 Ralph Lauren trench jacket despite the soaring temperatures in Washington, D.C. 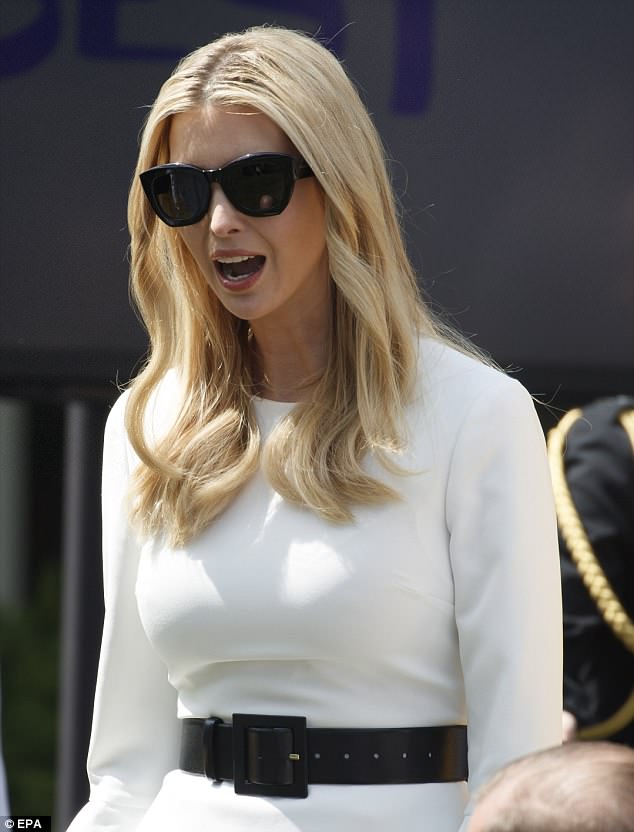 Ivanka, 36, looked elegant in a white bell-sleeve top, which she cinched at the waist with a black belt.

The first daughter’s long blonde hair was styled in loose waves around her shoulders, and she donned dark sunglasses to shield her eyes from the afternoon sun.

As guests made their way to the Rose Garden, Ivanka mingled with Education Secretary Betsy DeVos, and the senior adviser appeared to be laughing during their chat.

After more than a year of reading to children, learning about babies born addicted to drugs, and hosting a White House conversation on cyberbullying, Melania took the stage to launch her ‘Be Best’ campaign on Monday afternoon. 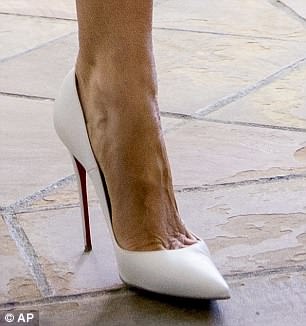 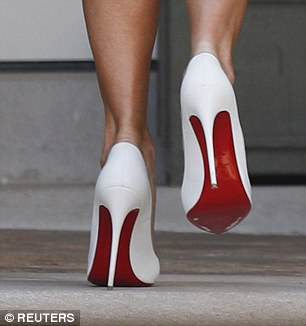 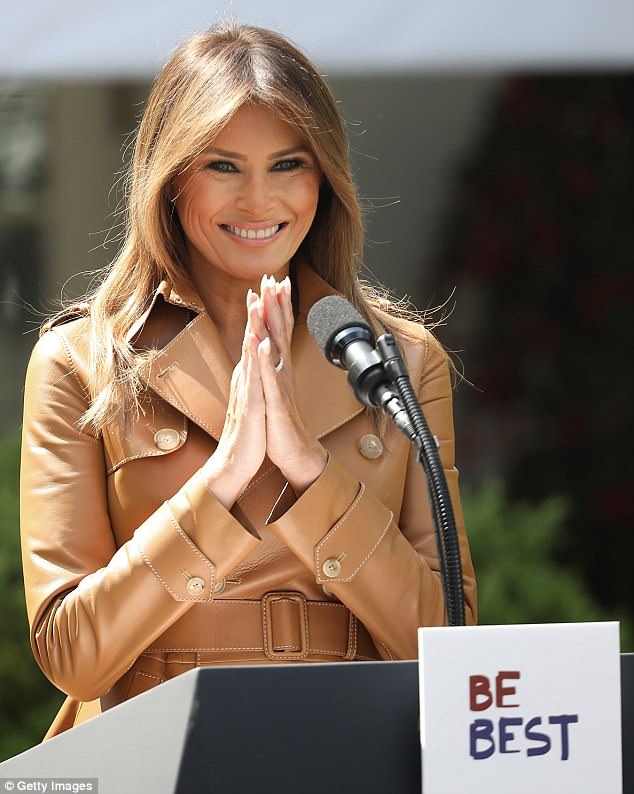 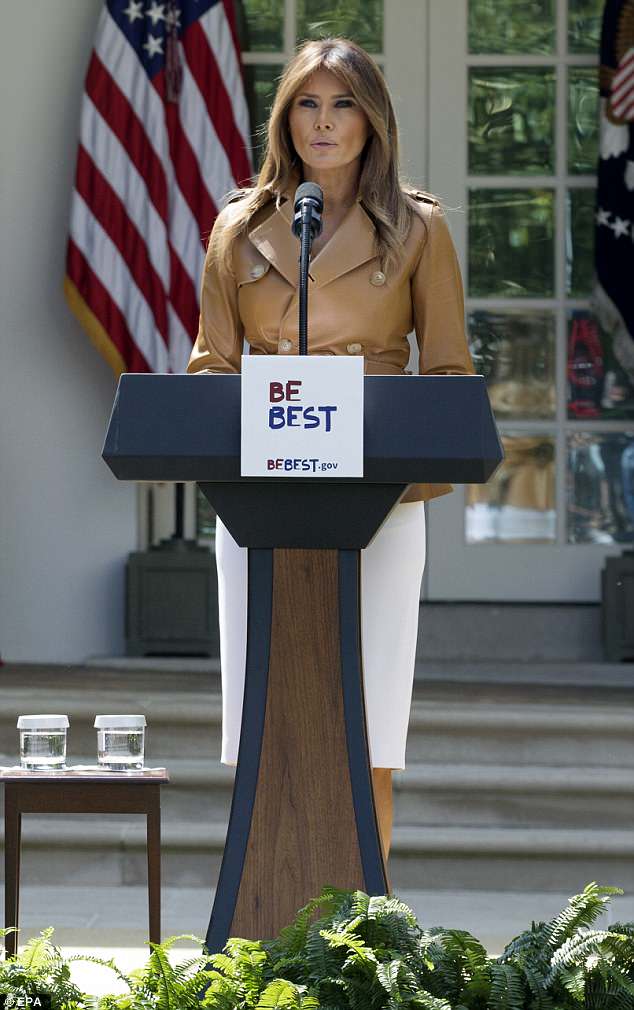 ‘As a mother and as first lady, it concerns me that in today’s fast-paced and ever-connected world, children can be less prepared to express or manage their emotions and often times turn to forms of destructive or addictive behavior such as bullying, drug addiction or even suicide,” she said in prepared remarks.

‘I feel strongly that as adults, we can and should “be best” at educating our children about the importance of a healthy and balanced life.’

The first lady said early on that she would focus on child well-being. The goal of her public awareness campaign is to encourage parents and other adults to teach children how to be good citizens, including being kind, not bullying on social media or anywhere else, staying away from drugs and taking care of themselves.

‘If we truly listen to what our kids have to say, whether it be their concerns or ideas, adults can provide them the support and tools they need to grow up to be happy and productive adults who contribute positively to society and their global communities,’ Melania said.

While the first lady was making the announcement, President Trump looked on from the audience before joining her on stage and giving her a kiss on the cheek. 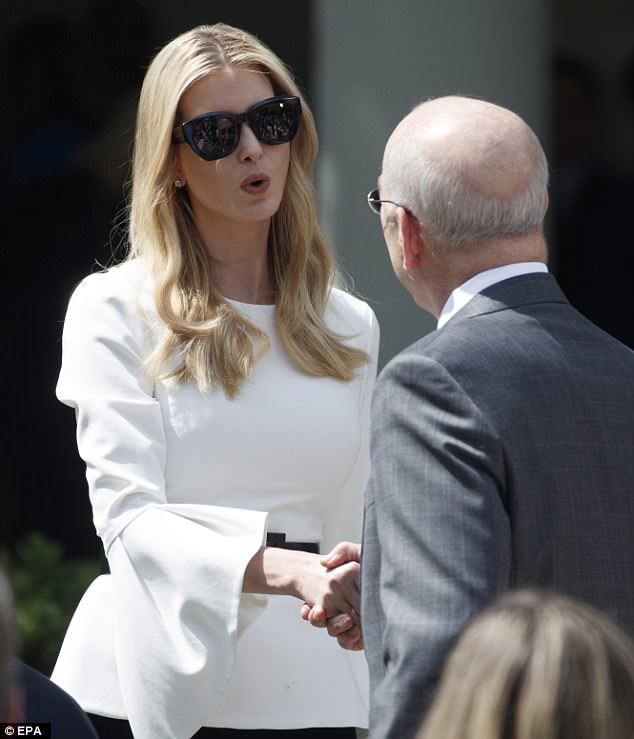 Ivanka, 36, paired her white top with black pants and a black belt to cinch her waist 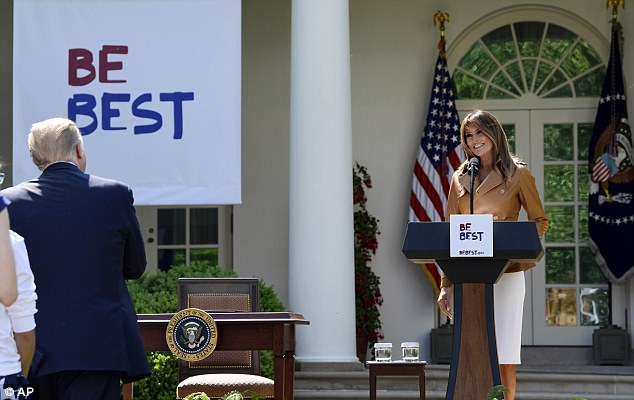 Melania’s husband, President Donald Trump, was in the front row when she unveiled her ‘Be Best’ initiative, which aims to encourage adults to teach children how to be good citizens 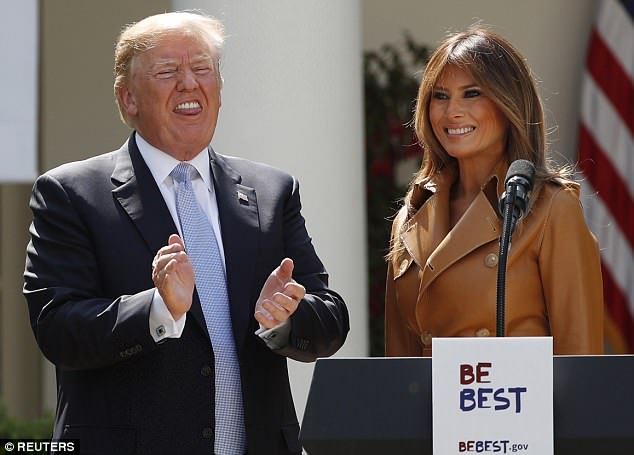 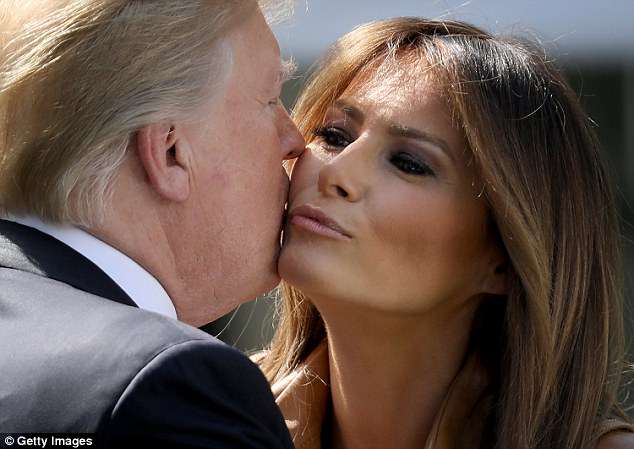 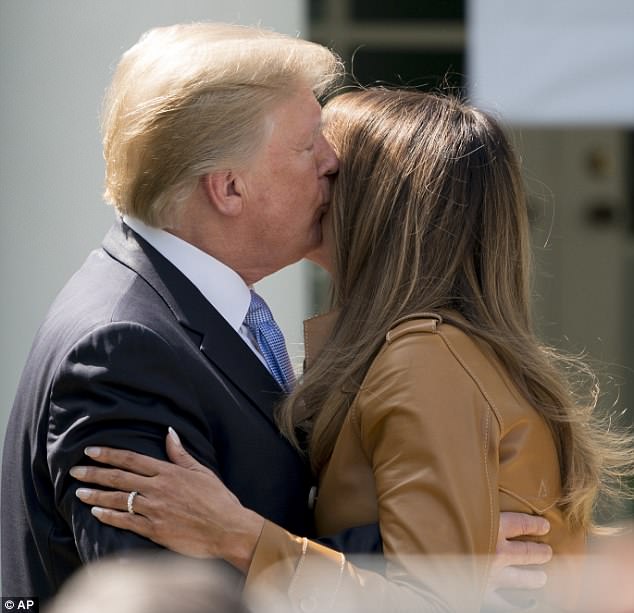 In addition to sharing some words of his own, Trump signed a proclamation for ‘Be Best’ day while participating in the initiative launch.

Melania’s announcement comes as her husband remains under intense legal pressure from a special counsel’s investigation into Russian interference in the 2016 presidential election.

During nearly 16 months as first lady, Melania demonstrated her interest in children by visiting with young hospital patients in the U.S. and during overseas trips with the president, often reading to them and encouraging them to do their best.

Her interest in the opioid drug crisis, developed during the presidential campaign, has taken her to care centers and hospitals in West Virginia and Ohio to learn about the epidemic’s effect on babies born to mothers addicted to the powerful painkillers. She convened a White House roundtable on the issue last fall. 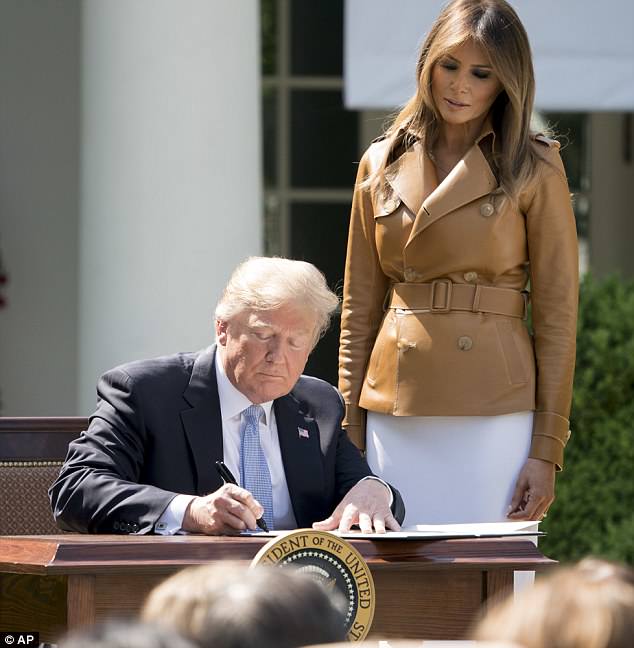 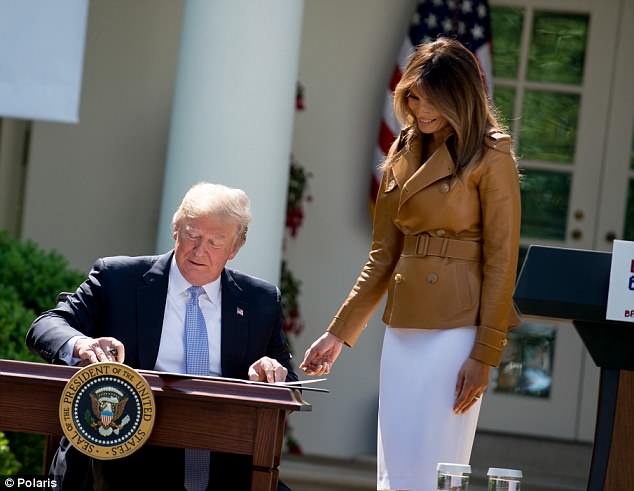 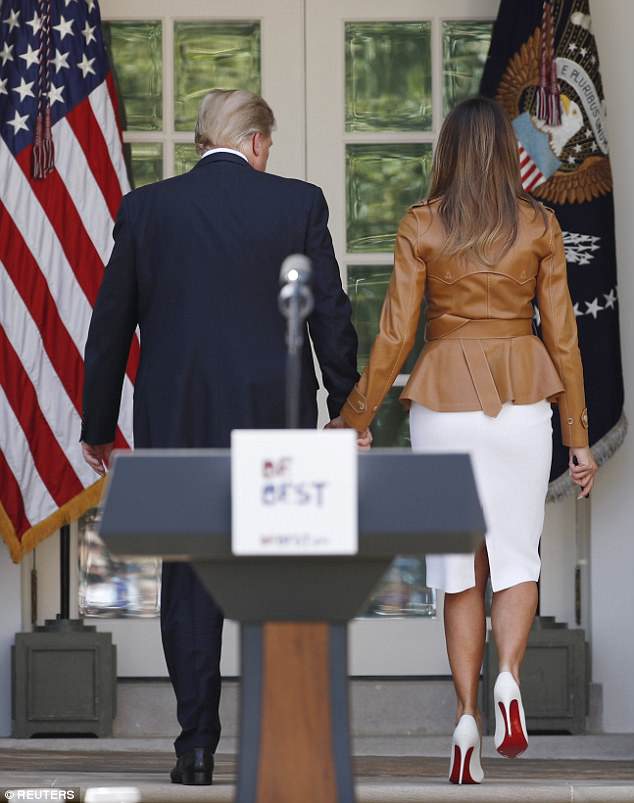 In March, the first lady hosted representatives of the major online and social media companies at the White House to discuss cyberbullying and internet safety.

That meeting came more than a year after she promised to use her White House platform to discourage cyberbullying. Her choice was ridiculed almost immediately, given her husband’s longtime habit of calling people names on Twitter, but Melania said the criticism wouldn’t discourage her from doing what she thinks is right.

She said on Monday that social media is too often used in negative ways and that it is important for children to learn positive online behaviors at a young age.

‘I do believe that children should be both seen and heard, and it is our responsibility as adults to educate and remind them that when they are using their voices — whether verbally or online — they must choose their words wisely and speak with respect and compassion,’ she said.

Modern first ladies typically highlight personal causes, from Nancy Reagan’s campaign to get kids to ‘Just Say No’ to drugs to the emphasis the late Barbara Bush and her daughter-in-law Laura Bush placed on literacy and education. 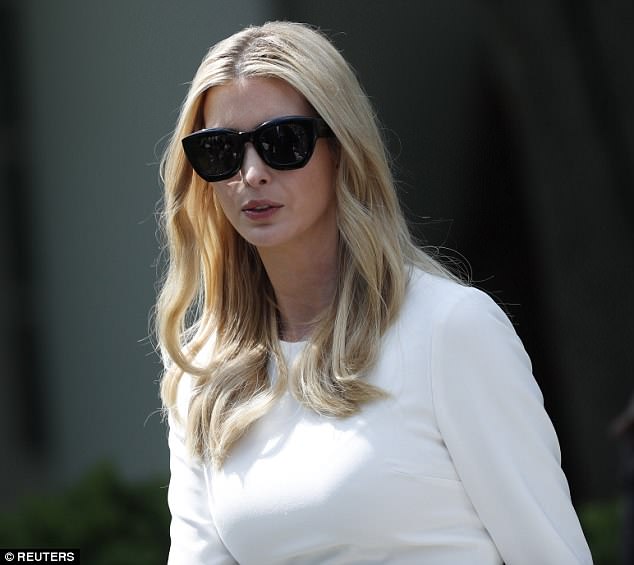 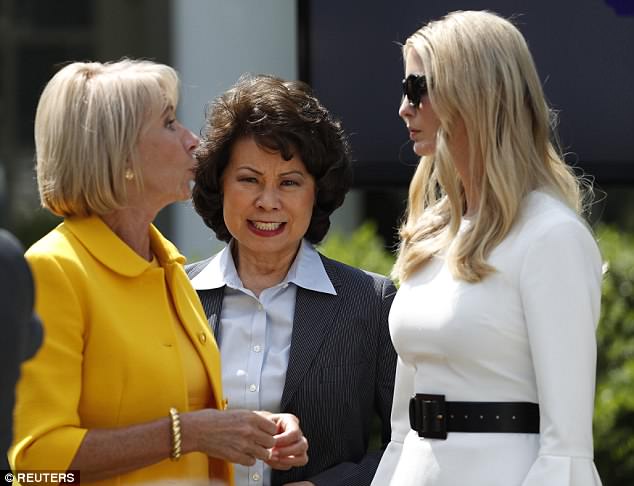 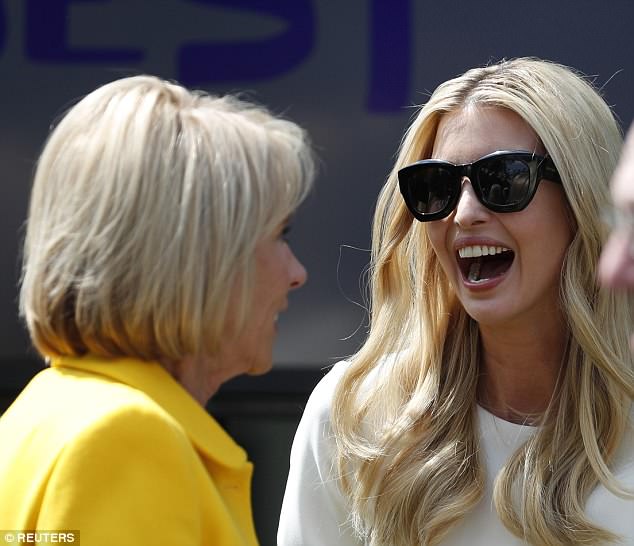 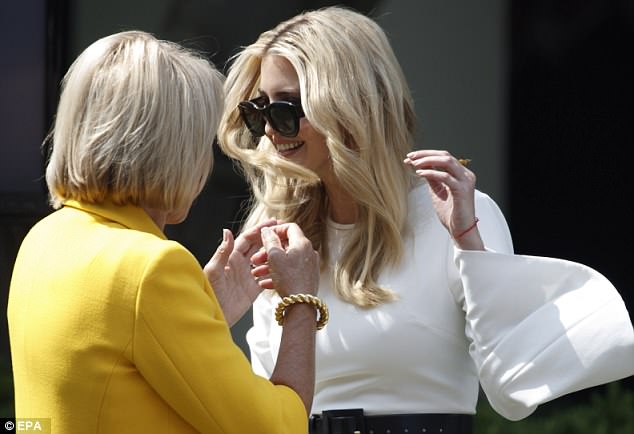 When Ivanka lifted her arm, she revealed a red string tied around her wrist. It bears a resemblance to the type of red string Kabbalah practitioners wear to ward off the ‘evil eye’

Michelle Obama launched her signature ‘Let’s Move’ campaign against childhood obesity about a year after moving to the White House.

Melania took a little more time to pull her initiative together. She did not live in the White House for the first five months of the administration to avoid having their son, Barron, now 12, change schools during the year. She has a smaller staff than her predecessors and only hired her policy director in January of this year.

The first lady plans said she will travel as part of the initiative.

Melania has achieved a new high in her personal approval rating – even as her husband battles the Stormy Daniels’ allegations and the Russia probe.

The first lady’s public approval rating hit 57 per cent in a new CNN poll, up ten percentage points from mid-January. 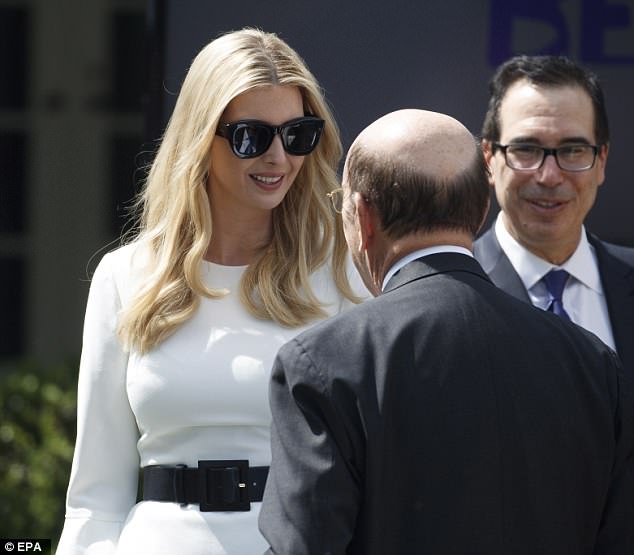 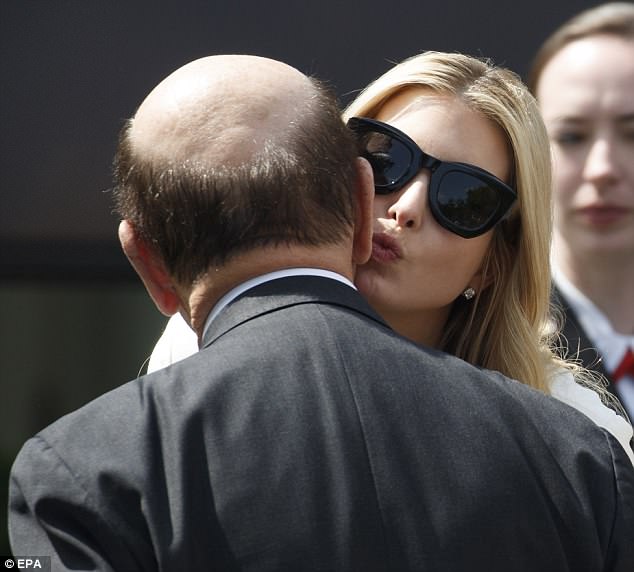 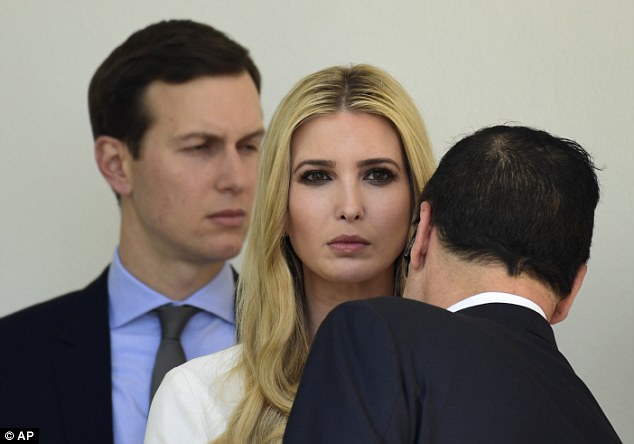 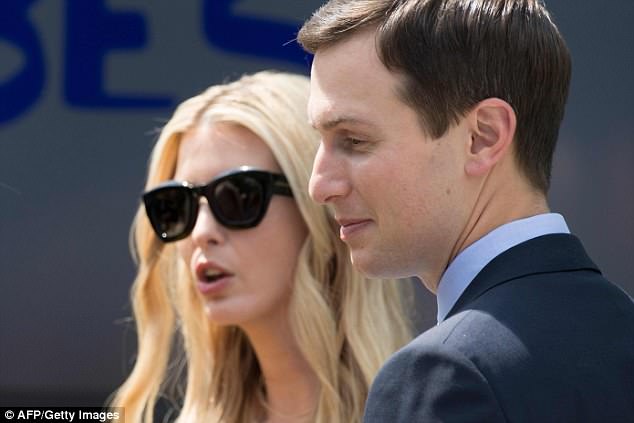 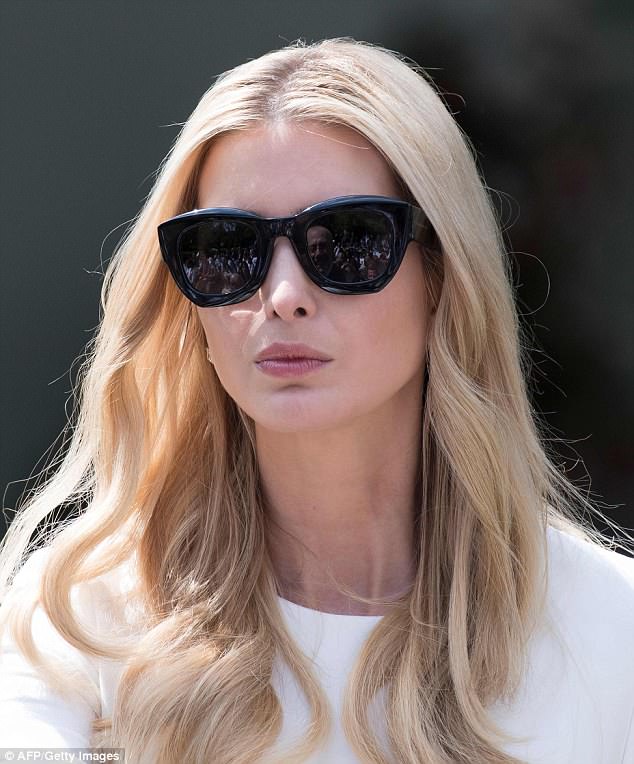 ‘They spend very little to no time together,’ a longtime friend of the president told the Washington Post, as Melania prepares to roll out her own White House initiatives to focus on children.

Although the pair are sometimes photographed smiling in public as when they attend joint events or board government aircraft en route to Mar-a-Lago, they spend considerable time apart.

They have separate bedrooms inside the White House, and Trump awakes at early hours to lob tweets at his rivals.

‘They are not that couple that holds hands just because; she is old-world European and it’s not who she is,’ said Stephanie Winston Wolkoff, who previously held a volunteer White House. Her firm got paid $1.62 million for consulting and production related to Trump’s inauguration. 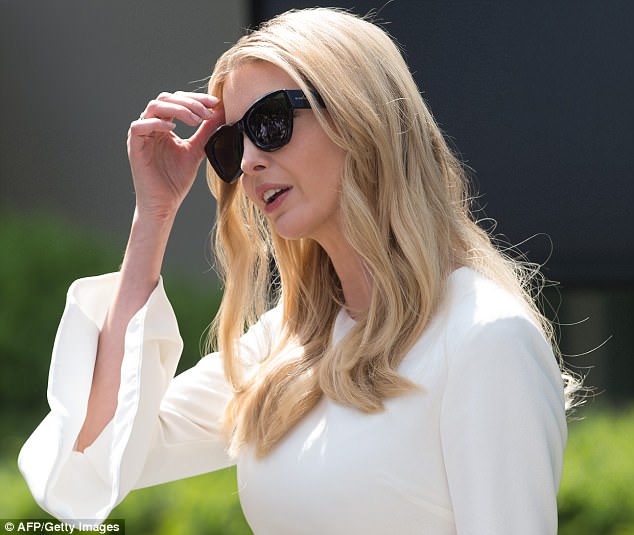 Ivanka’s bell-sleeve top was perfect for the weather, which reached 76 degrees on Monday 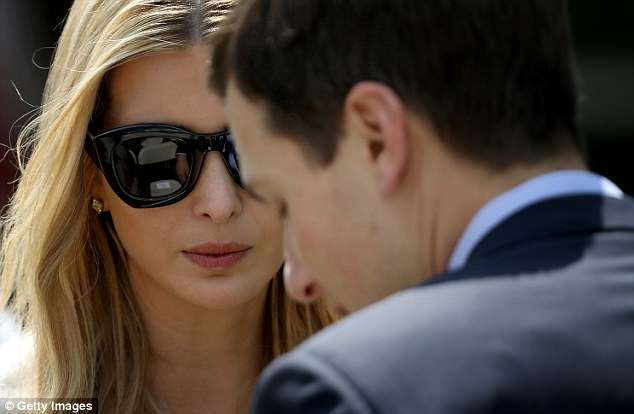 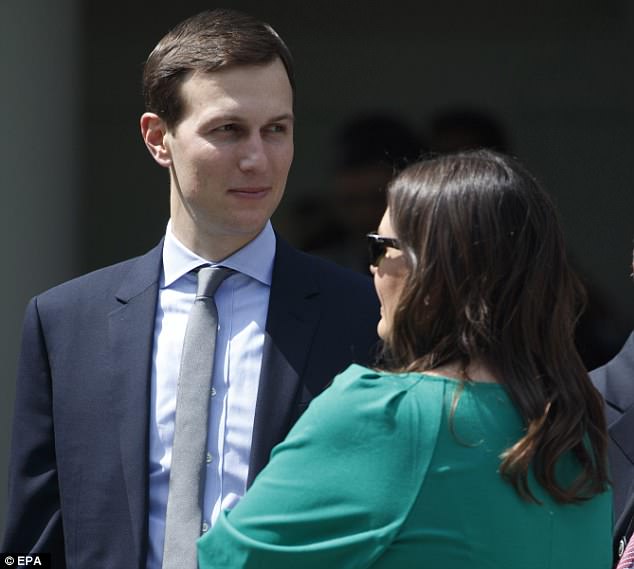 Jared donned a navy suit, a light blue shirt, and a gray tie for his day at the White House 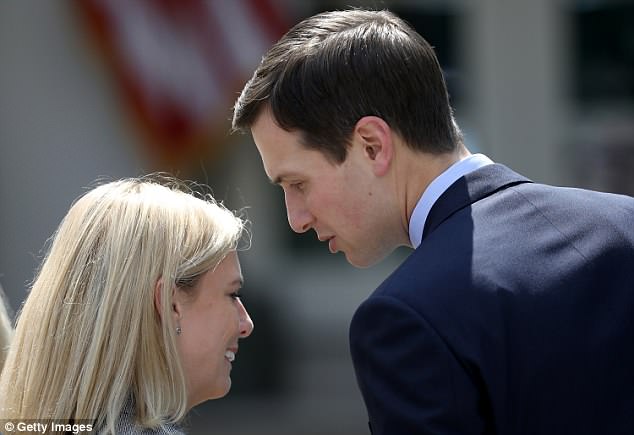 Melania’s spokeswoman, Stephanie Grisham, knocked down a ‘persistent rumor’ that the first lady doesn’t even live in the White House and stays with her parents near son Barron Trump’s school.

The two have carved out largely separate public lives. While the president makes regular appearances with his cabinet, staff aides, and world leaders, the first lady focuses on her own, less-frequent events.

When the couple travels to Florida for weekends, the only image of them together is frequently of them boarding and de-boarding an aircraft.

President Trump sent his wife birthday wishes during an appearance on Fox News last month where he said: ‘Maybe, I didn’t get her so much. I got her a beautiful card, you know I’m very busy to be running out looking for presents.’

She hasn’t spoken about the Stormy Daniels scandal that has rocked his administration.