Having to supply their own choc-tops has been no deterrent to viewers of the first online-only Melbourne International Film Festival, with the audience for this year's reduced offering way up on last year's IRL (in real life) version. 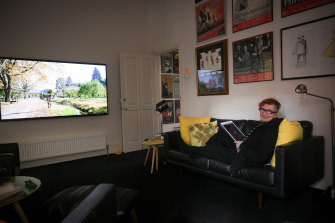 Rosemary Forbes is endeavouring to watch every single film at MIFF.Credit:Eddie Jim

The festival's reach has increased too, with MIFF reporting that around one in five of its viewers this year was interstate.

Long-time festival-goer Rosemary Forbes has certainly been doing her bit to boost the result. The 72-year-old retired HR specialist is on a mission to watch every single film in this year's program. On Saturday alone, she watched seven.

"They've been adding some content though, which is setting me a bit of a challenge I'm afraid. They've just added three more films that I'll need to fit in."

Daunting as the task of watching 118 films in 17 days might sound, Forbes has been in training for years. She first attended the festival in the 1970s and, after a brief hiatus when career took precedence, has been a regular and high-volume attendee since the 1990s.

"I used to take annual leave for the duration," she says. "I'd typically watch about 80 to 85 films."

Stepping it up this year seemed the natural thing to do. "Let's face it, it's isolation," she says. "What else am I going to do?"

Watching so many films so close together does pose certain challenges, she concedes. "I often forget the names of films, and if you ask me about specific plot points a week down the track I'd probably say, 'I'm not sure exactly'. It's the look of the film, the craft of the cinematographer, the direction that I remember."

Her highlights this year include opening-night film First Cow, the Chechen movie Atlantis and the long-form documentary Women Make Film (14 hours in total). Collectively, the program "really puts life into perspective," she says. "There are so many issues and challenges around the world and life in Australia for most of us is really pretty good."

At the same time, it's also a welcome means of escape.

"Now that we're in isolation, it's the most wonderful way to travel," Forbes says. "I've been to the islands this morning – I've even been to Geelong. Nothing against Geelong, but it's been a long time."

She's planning to mark the festival's conclusion on the weekend with dinner from Florentino and a nice sparkling shiraz. And nothing, she insists, will stop her finishing her mission to watch every single film.

But for all that she's embraced this year's online iteration, Forbes is not a convert for life.

"You miss the people you sit near, the people you meet in the queues and bars, the volunteer ushers. We've made life-long friends from chatting to people on the tram going home after a film, just by asking 'what did you see?'" she says.

a, Audience, MIFF, numbers, up, Way
You may also like:

Modelling is a cinch for Boris's girl