Mum's adorable 'cubby under the stairs' for her daughter's birthday

Mum, 36, shares how she transformed the ‘dead space’ under the stairs into an adorable cubby for her daughter’s birthday – and she only spent $250

An Australian mum has shared how she and her husband transformed the ‘dead space’ under the stairs to make an adorable cubby house for their three-year-old daughter.

Erana, 36, from Queensland, told FEMAIL the home project only took two days to complete and cost around $250 by purchasing inexpensive products from Kmart, IKEA and Bunnings Warehouse.

‘When we initially purchased the property which is a two bedroom townhouse with limited space, we immediately thought of using the space under the stairs as a cubby because we didn’t want Lani’s toys taking over our living space.’ Erana said. 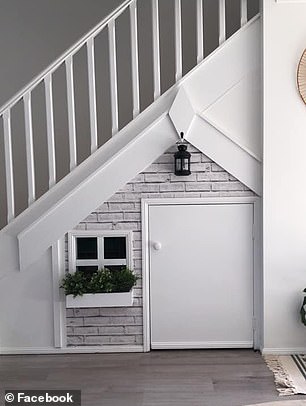 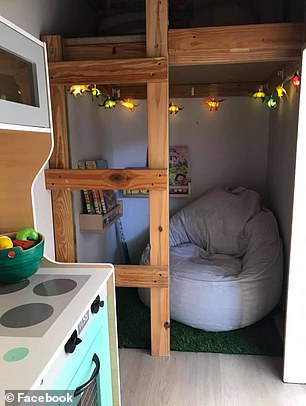 ‘The idea of what it would look like was a combination of searching for ideas online and our own creativity,’ Erana said.

She said she thought of the idea and her husband Drew, who’s a builder, helped bring the vision to life.

The panels and ladder inside were also made from recycled timber.

When asked how her daughter reacted when first seeing the cubby house, Erana said: ‘I think she was in shock when she first opened the door and wasn’t sure what to say or do but she loved the dinosaur lights and has been cooking up a storm in the kitchen!

‘The interior was created for her birthday recently so she could better utilise the space because at times it became so overcrowded with toys she couldn’t actually play in there,’ she said.

To share the final result with others, Erana posted images and a video to the Kmart Hacks and Decor Facebook group where it quickly received praise from others. 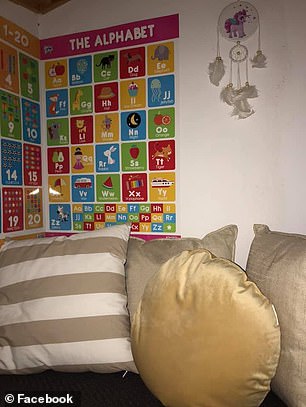 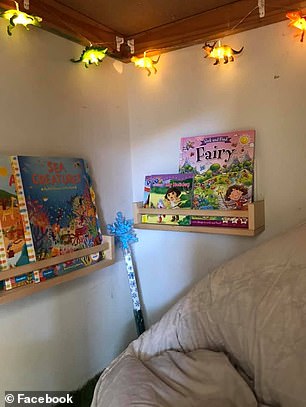 ‘The interior was created for her birthday recently so she could better utilise the space because at times it became so overcrowded with toys she couldn’t actually play in there,’ she said

How much did all the items cost and where are they from? 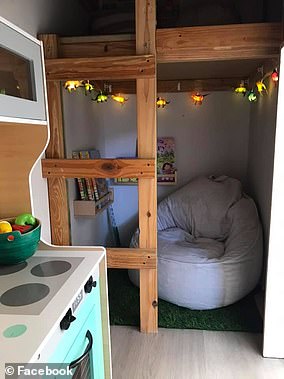 ‘What a fantastic use of the space under your stairs!’ one woman said.

‘Omg I want this, maybe [for the] next house,’ another said.

A third added: ‘Oh my gosh!! I love this, what a great idea. I really wish I had stairs now.’

The post received more than 1,600 likes and 200 comments from other members of the group who described the cubby as ‘brilliant’ and ‘so creative’.