The dirty truth hiding in plain sight: Mums are using ‘black lights’ to clean their seemingly spotless homes – and what they reveal might shock you

Horrified mothers have discovered layers of dirt lurking in plain sight in their kitchens, hallways and bathrooms.

They uncovered the hidden grime with ‘black lights’, devices that shine ultraviolet rays which reveal fluids invisible to the naked eye like urine, semen and saliva.

Women have shared warnings in an Australian community group on Facebook, with many appalled by the stains scattered across their seemingly spotless homes. 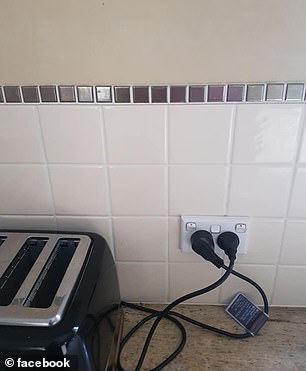 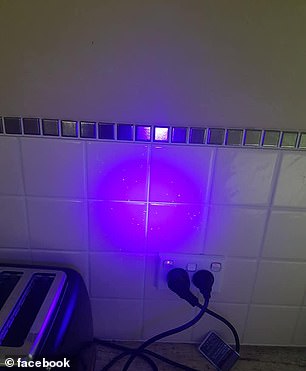 A mother discovered dirt lurking in plain sight on her seemingly spotless kitchen tiles (left) by shining a black light over the wall (right), revealing specks of grime invisible to the naked eye

One woman recommended shining a black light on the floor and tiles around the toilet, ‘especially if you live with boys’.

‘Witness the horror,’ she said, before encouraging people to invest in a device from Amazon or eBay.

Another was prompted to replace her carpet with wooden floorboards after seeing the stains strewn across the ground.

‘It’s amazing what you can’t see,’ she said. ‘No more debating getting rid of the carpet and putting down hard flooring now. It’s going.’

But others believe ignorance is bliss and said they’d ‘rather not know’ to avoid becoming obsessive about cleaning.

A black light emits harmless ultraviolet (UV) light that is invisible to the human eye. Certain fluorescent substances absorb the UV light and re-emit it at a different wavelength, making light visible as the material begins to glow.

These substances include body fluids like blood, saliva, semen and urine, which is why forensic detectives run UV lights over crime scenes to identify perpetrators.

‘I recommend not doing this, I repeat DO NOT do this. We did this and were horrified with what it showed up and where!’ one woman wrote.

‘Unless you want to spend the rest of the year cleaning everything and I mean EVERYTHING, don’t get one.’

A second agreed, saying it would drive her crazy.

‘It’s bad enough keeping up with things now. I can see enough during daylight hours to keep me busy.’

Those brave enough to see what’s lurking on home surfaces can buy black lights from eBay for as little as $19.

as, Black, horror, lig, mum’s
You may also like:

60 Christmas gifts for your girlfriend