Would YOU tell someone their knickers are on show? Mother reveals her dilemma over a woman on the school run whose pink THONG can be seen through her ‘thin’ leggings

A mother whose pink thong is visible through her leggings has sparked huge debate, after another mum on the school run pondered whether she should tell her.

Mumsnet user Clinicallysilly revealed that she had seen the unnamed woman flashing her underwear ‘on more than one occasion’.

She said she felt ’embarrassed on her behalf’ and asked other people on the parenting website whether she should discreetly let her know.

The thread was divided, with some users saying they’d want to know, while others suggested that the woman is probably aware that everyone can see her underwear. 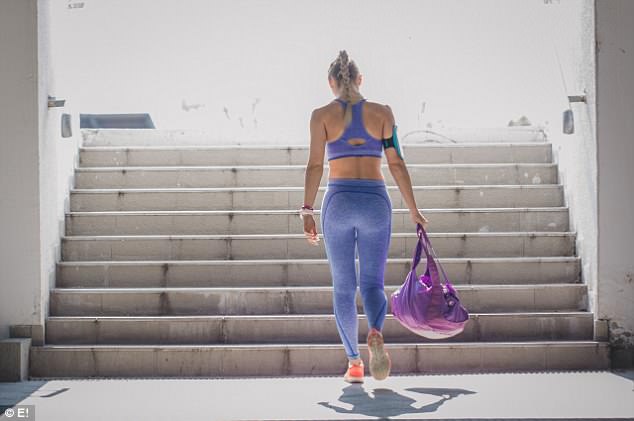 Blushing: A mother said she has seen the pink thong under the leggings of another mum on the school run several times

Clincallysilly said on this occasion the woman was wearing a bright pink thong under a thin pair of black leggings.

She explained: ‘I see a mum on the school mum every morning wearing very see through leggings. Today, she bent down in front on me to get something out of the pram basket and I was greeted by the view of her a*** through her leggings.

‘She had a pink thong on under thin black leggings and a top which stopped at her hips. So everything was visible, I felt embarrassed on her behalf. A longer top would have covered a multitude of areas.’

She then asked if she could ‘diplomatically’ tell her that she was flashing her underwear.

Many Mumsnet users told her that they would want to know if it was them.

One said: ‘I would tell her. She might not know, I emailed someone from another department at work I could see their knickers.

‘She didn’t reply but she spent the rest of the day with a jacket around her waist and never wore those trousers again so clearly she didn’t realise. I would want someone to tell me!’

Another agreed: ‘I’d just tell her. People are so weird about this type of stuff. Like when someone has make-up smeared across their face or a bogey on their cheek, they’ll just stand there talking to the person pretending they don’t see it.

‘Then that poor sod realised when they get home after a full day at work being a bogey face.’

However, others said the woman might take offense, and it should be up to her friends to tell her.

In on it: Other suggested that the woman knew that her leggings were see-through and thought it was sexy

‘I wouldn’t say this to anyone but a close friend to be honest. You do see this quite a lot, not a good look,’ one commented.

Others suggested that the mother knew, as leggings are often see-through.

One said: ‘She knows. It’s deliberate. She thinks it’s sexy. Maybe it is? I have no idea.’

Another posted: ‘She knows. Everybody knows that your underwear is on show when you wear leggings – unless you have the thick sport lycra ones possibly.’

asks, Mumsnet, Tell, Underwear, user, woman
You may also like:

Mum saves £150 by making her own oversized bauble wreath

The OK! Beauty Edit is here – get yourself £65 worth of luxury products from just £13 straight to your front door

Consumer spending spree gets economy on track to recover from recession