Follow
Home » Lifestyle » ‘My wedding day was a disaster’

‘My wedding day was a disaster’

When Meghan Markle stepped into St George's Chapel in May, I keenly recalled the run-up to my big day three years ago, when a litany of mishaps threatened to overshadow my own walk down the aisle. 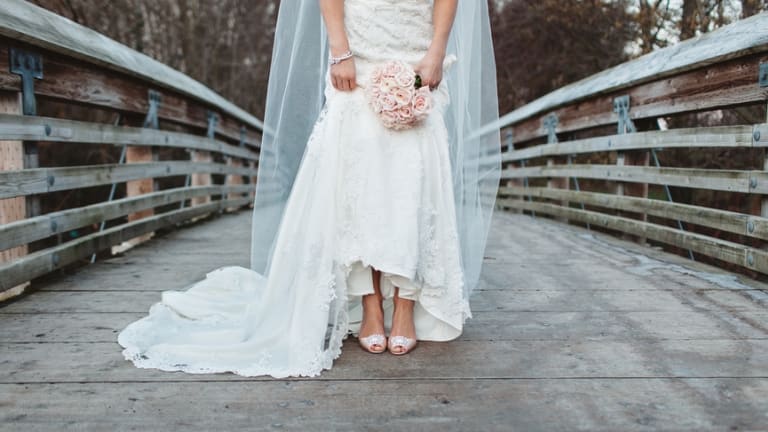 I found myself racing around the hotel in my wedding dress, battling one mini-crisis after another.

Our wedding, overlooking the sparkling Mediterranean near Tel Aviv, should have been the most picturesque moment of my life. It was small, a select group of friends and family flying to Israel to be with us on what I hoped would be a perfect day.

The first fissures to appear were literal, if not life-threatening. Two days before the wedding, my fake tan began to crack, leaving white patches on my arms and chest. My fiancé and I ended up spending the night scrubbing my body with lemons and baking soda to get it off.

The next day, I woke to a call from my brother saying that his flight – which was also carrying close friends and family – had been turned around in mid-air because of technical difficulties. The next available flight would mean they might not make it in time for the ceremony.

I spent 24 hours on tenterhooks. If they hadn't made it, I'd have been devastated, and it was only when he called saying they'd landed that I could breathe a sigh of relief.

The morning of our wedding finally arrived. I'd planned to spend those precious, emotional hours with family and friends, but instead I found myself racing around the hotel in my wedding dress battling one mini-crisis after another. First, I discovered that a close family member's name was misspelt at the top of the beautifully hand-written seating chart. Sitting in my Vera Wang dress, I cobbled together a correct version on a laptop and hastily printed it out at the front desk.

The hotel then casually told me that there wouldn't be enough seats for everyone during the ceremony – a problem that proved unfixable. To cap it all, my bouquet went missing (although in the chaos, I didn't notice until I was halfway down the aisle).

Those quiet hours I'd hoped for shrank to a few minutes, which I spent trying to relax in the honeymoon suite. Suddenly there was a knock at the door. When I answered, I expected to see my father arriving to escort me downstairs. Instead, it was a hotel manager telling me to evacuate as there was a gas leak. By some small miracle the suite was in a different part of the resort to the ceremony, so that could go ahead as planned.

It was far from the perfect day I had dreamt of, but as I stood beside my fiancé, I was giddy with excitement. The setting was gorgeous; it couldn't have provided a more perfect backdrop for our first moments together as husband and wife.

It was only after I took my place beneath the silk-draped canopy that I noticed the intensity of the midday sun. For a moment, standing there in my corseted gown, I worried I might faint, but a light breeze came up and provided a welcome respite. The weather, I remember thinking, was the only thing that had gone right.

But then the wind picked up, just enough to begin rocking the canopy back and forth. Suddenly it swayed a fraction too far and collapsed on to our wedding guests. I thought for one awful moment that it might have knocked people out – or worse – but thankfully, the worst injuries anyone suffered were cuts and bruises.

Only my now-husband's hand clasping mine prevented me from running off and finding a corner in which to sob. Instead, we raced through the rest of the ceremony, and quickly moved on to the reception.

At the time, I was devastated. But my husband and I can now see the funny side. After all, the point of a wedding isn't to create that perfect Instagram moment but to mark the beginning of your journey together as a married couple. Still, it'll be a few years yet before we'll be brave enough to renew our vows.

This article appears in Sunday Life magazine within the Sun-Herald and the Sunday Age on sale August 12.

a, day, disaster, my, was, Wedding
You may also like:

Coronavirus prompts airlines to have face mask-related ‘no fly’ lists

‘An eviction’: Patients removed from detox clinic after COVID-19 case

Raise a Champagne Glass to These Still In Love Bachelor Couples