An aged care home in Kilsyth where residents have died of coronavirus was found to be in chaos when an alternative workforce was sent in to replace permanent staff.

The head of the Victorian state nursing union has told a parliamentary inquiry of disturbing scenes at Kirkbrae Presbyterian Homes.

Kirkbrae has had 127 coronavirus cases and at least 17 of its residents have died. The outbreak is the state’s fourth worst in aged care. 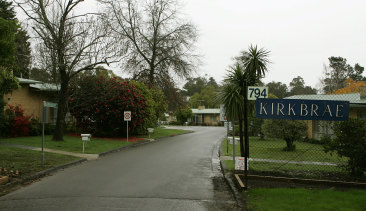 On Tuesday the state secretary of the Australian Nursing and Midwifery Federation’s Victorian branch, Lisa Fitzpatrick, told a state parliament inquiry into the pandemic of “a shift from hell” that nurses going into Kirkbrae had endured in late July.

In late July, after an outbreak at Kirkbrae spiralled out of control, a team of nurses was sent in to replace the remaining permanent staff at the centre who had not succumbed to COVID-19 infection.

Ms Fitzpatrick told the inquiry that a handover document given to the nurses by Kirkbrae management listed residents in each room.

“A number of those room allocations were inaccurate, so when they went in to say hello to one resident, they found another resident in the bed,” Ms Fitzpatrick said.

She said the day the nurses went in, phones were ringing constantly but went unanswered as there was no one there to take calls, and that nurses were given little assistance by the home’s managers.

Bins in the centre were overflowing with personal protective equipment, because there was only one cleaner working, Ms Fitzpatrick said.

So overwhelmed were the staff who had been left at the centre before the team of Eastern Health nurses were sent in that flowers sent by concerned relatives were rotting in vases, she said.

“The flowers in the vases, they were dead and rotting and the water was putrid,” Ms Fitzpatrick said.

“One of the residents had such terrible oral thrush that they were very concerned about his ability to be able to eat or drink,” Ms Fitzpatrick said.

Management at Kirkbrae could not be reached on Tuesday night, but a statement by the home confirmed that many residents in the centre were evacuated in late July after the outbreak.

More than 1000 aged care residents at homes in Victoria have now acquired a coronavirus infection, and at least 189 have died.

Ms Fitzpatrick told the inquiry it was becoming clear that many aged care homes had not developed a COVID plan with the federal regulator after the state of emergency was declared in March.

She said this lack of planning had led to residents being badly neglected once a centre was overwhelmed with infections.

“Where was the COVID plan that Kirkbrae had? Who checked that they had a plan? It was meant to be the Commonwealth’s job.”

A statement by Kirkbrae, posted on its website on Monday, said the COVID-19 outbreak there was “very significant and challenging event for everyone at our aged care facility”.

“We know it continues to be a very difficult time for residents and their families,” the statement said.

It said 38 residents were now living at the 106-bed aged care home and that Eastern Health had taken over “all operational aspects of our facility”.

aged, found, Kirkbrae, New, staff
You may also like: