Follow
Home » Lifestyle » Not forever young: Australia now a nation that is ‘one and free’

Not forever young: Australia now a nation that is ‘one and free’

Australians will rejoice as a people one and free from Friday after Prime Minister Scott Morrison changed the words of the national anthem.

The second line of the national song is now "for we are one and free" instead of "young and free" in a modification Mr Morrison wants to recognise the way Australians have united during the pandemic over the past year, the long history of Indigenous people, and the waves of migration. 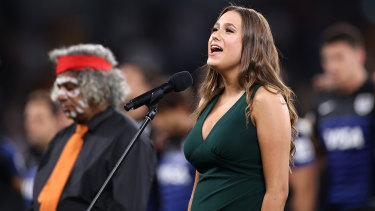 "This change is for all Australians. We are one country and have proven so from generation to generation," Mr Morrison writes in an opinion piece published in this masthead.

The idea for the wording change was raised by NSW Premier Gladys Berejiklian about a year ago, however, the Prime Minister did not then think the timing was right. Ms Berejiklian reignited debate over the lyrics in November, shortly after the NRL decided to abandon the anthem for State of Origin and then reversed that position after a backlash from fans and Mr Morrison.

Ms Berejiklian said at the time that to continue singing Australians were "young and free" ignored the tens of thousands of years of First Nations culture and heritage. She was backed in November by a range of Indigenous and political leaders, including Labor's Anthony Albanese, Indigenous Australians Minister Ken Wyatt and One Nation leader Pauline Hanson.

In early December, 16-year-old student and Wiradjuri woman Olivia Fox sung a verse of the national anthem in the Dharug language ahead of the Wallabies playing Argentina, eliciting a wave of positive feedback. Mr Morrison has recounted on several occasions how children in the Sutherland Shire, including his own, learn the anthem in Dharawal language.

However, the Prime Minister does not want the change to the wording to be seen purely through the prism of Indigenous recognition, which is behind his recommendation to Governor-General David Hurley it take effect from January 1 rather than Australia Day.

"In recognition of the extraordinary united effort of Australians over the past year, the time is now right to make the change," Mr Morrison says.

"During a time when communities around the world are splintering and identity politics concentrates on our differences, this change affirms our shared national story and shared destiny."

Mr Morrison said that at that time, the phrase "young and free" "undoubtedly captured the energetic spirit of liberty that drove Australia towards nationhood". It was adopted as the national anthem under Gough Whitlam in 1974 but dumped two years later when Malcolm Fraser reinstated God Save The Queen. Advance Australia Fair was again adopted as the anthem under Bob Hawke in 1984.

It is expected the first official rendition of the anthem with the new words will be sung at the opening of the January 7 Test match.

australia, Forever), N, not, Young
You may also like:

The life-saving trick every pregnant driver should know

DAN HODGES: We must have grown-up debate about Covid, culture and race

Britney Spears' Boyfriend Sam Asghari Says He's Ready For 'Next Step' in Relationship: 'I Want To Be a Young Dad'