Ooh la la! The French have raised the bar for interiors: Forget the cliched plot, it’s the home designs in Netflix’s Emily In Paris that are truly captivating

Like it or loathe it, Netflix’s latest hit series Emily In Paris brilliantly showcases the ‘less is more’ sensibility innate to so many Parisians.

‘It’s a cultural thing, a feeling of not overcrowding a scheme,’ says its production designer Anne Seibel, nominated for an Oscar for her work on the film Midnight In Paris, also famed for its drool-worthy Gallic interiors.

‘Parisians love to mix high and low, whether pairing a contemporary painting with a vintage sofa, or an antique mirror with an Ikea floor lamp.’ 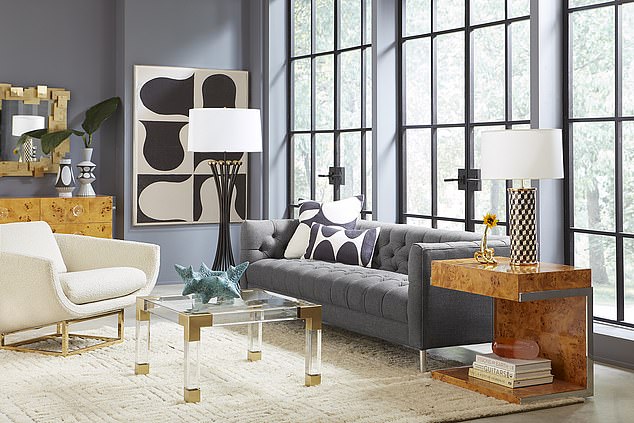 It’s a look that Anne terms ‘bourgeois boheme’, and thankfully she insists it migrates. So, if you want to add dash to your own interiors, here’s how …

Look closely and you’ll see that there are plenty of standout shapes on the sets of Emily In Paris, but few of them are linear.

Instead, soft curves and gentle edges headline, from the Modernist lamps on Emily’s desk to the fluid metal-framed mirrors in Sylvie’s office.

Combine curves with tactile fluted finishes, such as the Tivoli side table, £131, by Maisons du Monde (maisonsdumonde.com).

A few key pieces inspired by the members’ club are already available online, such as the Monnier Bathroom Mirror, £506, and the Brooke Wall Light, £125, both good examples of a new, modern era of Parisian chic (sohohome.com). 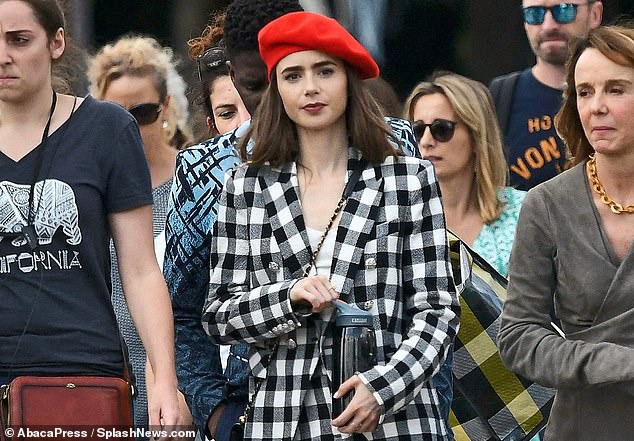 Star turn: Lily Collins stars in the Netflix hit  Emily In Paris which brilliantly showcases the ‘less is more’ sensibility innate to so many Parisians

Decluttered rooms that allow furniture and accessories space to breathe are key.

‘I’d say it comes from the French’s ability to mix styles effortlessly,’ says Dionas Sotiriou, who founded Maison Flâneur (maisonflaneur.com) in 2018 as a platform for design lovers to shop the look from cool hotels and restaurants, including Paris’s Hotel Grand Amour and Le Pigalle.

‘Parisian style creates an ‘in-the-know’ look which draws from Cubist design principles. The French know how to blend luxury objects and vintage furniture.’

At home, start by removing surplus pieces, highlighting only those that you truly love. Think of it instead as a curated edit of favourite items, with natural woods and subtle brass accents adding warmth and texture.

When it comes to ambient mood-setting, naturally the City of Light does not disappoint.

It feels like a modern update of Paris’s classic bistro lighting, originally created to provide soft illumination and, of course, to flatter diners.

A casual, slightly insouciant approach is part of Parisian DNA. ‘There’s a sense of playfulness, from the way we dress to how we furnish our homes, mixing fabrics and colours with the lightest of touches,’ says Anne Seibel.

‘It’s not about schemes that look as though they belong on the cover of Maison Française, it’s more undone than that. We like to find new purposes for old pieces.’

Anne and her set decorator Christelle Maisonneuve often frequent the city’s famous fleamarkets. ‘At Marcel et Jeannette on Rue des Rosiers, we found vintage fabrics that we framed to hang in (Emily’s) Savoir’s offices in the show,’ she says.

In Anne’s own apartment, embroidered sari silk found on a trip to India makes an impressive bed canopy, while her grandmother’s antique circular dining table shares space with a vintage sofa.

‘The purpose of a Parisian interior is simply to make you feel great,’ she says. The reason, perhaps, why everyone’s talking about Emily …

What your home really needs . . . an uplighter 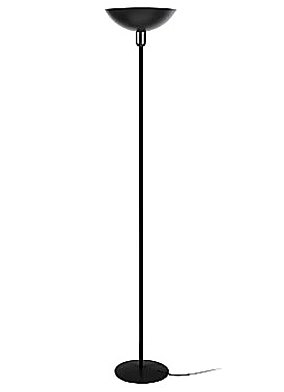 What’s an inexpensive way to cheer a gloomy corner of a room at this time of year? The answer is an uplighter floor lamp, something you can acquire for just £8 at Argos (argos.co.uk).

If you used this lamp for six hours every evening until the first day of spring, it would work out at about 6p a day, including the electricity for a low-energy bulb.

The uplighter can trace its ancestry back to late 17th-century France. Torchères, large wood or metal candelabras of elaborate design, brought illumination to the darker bits of draughty chateaux making it easier to read, or to party into the night.

Your home needs an uplighter because the clocks go back on Sunday and its slim, uncluttered lines can turn a tiny space into a smart workstation.

Habitat (habitat.co.uk) has the sleek black Sheldon (£95). The brass coloured Ignacia from lights.co.uk is priced at £84.90.

An original 17th-century torchère would set you back about £10,000, excluding the candles.

French, have, la, Ooh, rai, the
You may also like:

‘Breakup Bootcamp’ author shares how to get over a quarantine breakup

Can you drink outside a pub in Tier 2?

Twitter celebrates Dec. 1st, the beginning of the end of 2020