Pandemic budget will focus on jobs and give people ‘hope’, Morrison says

Prime Minister Scott Morrison believes this year's federal budget will be one of the most important "since the World War II" and will centre around rebuilding the economy in the form of jobs.

Appearing on Channel 7's Spotlight, Mr Morrison said while the budget – which will be delivered by Treasurer Josh Frydenberg on October 6 – would "reflect" the global effects of the coronavirus pandemic, it should give Australians "hope" for the future. 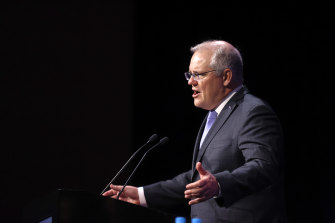 Mr Morrison said that while it was “devastating” that the Australia economy had fallen 7 per cent in June, the budget would put the nation into recovery mode. Credit:Getty Images

"The country, the world has not seen what we are seeing right now. The world economy is expected to shrink by about 4.5 per cent this year. To put that into perspective during the Global Financial Crisis, it shrunk by 0.1 per cent," he said.

Mr Morrison said while it was "devastating" the Australian economy had fallen 7 per cent in June, the budget would put the nation into recovery mode.

Eager to see more of the 1.3 million jobs lost during the pandemic recovered, Mr Morrison said he would like to see JobSeeker remain on elevated levels for "some time to come".

Over 760,000 jobs have already been recovered in recent months.

"Then we have JobKeeper in place which goes till the end of March, it doesn't finish in March," he said.

Mr Morrison said the federal government would be making a call on whether to further extend JobKeeper "closer to that time".

"I don't want to mislead people on that…it's there till the end of March," he reiterated. "I think we are putting ourselves in a position to recover."

Mr Morrison said he was eager to make the New Zealand bubble happen, after just getting back from South Australia.

"They've made that decision [to open their borders]," he said. "That will be worth about $800 million to the South Australia economy … so it is an obvious opportunity but it has got to be done safely."

Budget, focus, on, Pandemic, will
You may also like:

“I’m now the fun police”: how 3 weeks of the 10pm curfew has really affected staff and customers

Tori Spelling Joining 'RHOBH' Season 11 Rumor Has Been Shut Down

'Drag Race Holland': Sederginne Sounds off on Her Shocking Elimination

Rihanna’s London Home Is Being Sold For $41 million