Pandemic strangles Parliament in a way even war couldn’t manage

Not even a world war disrupted the Australian Parliament to the extent forced upon legislators by the current coronavirus pandemic.

The biggest upheavals in Parliament during the Second World War were an air disaster, leadership changes, federal election results and, towards the end, the strain of war becoming too much for Labor prime minister John Curtin, who collapsed and died less than three months before the war finished. 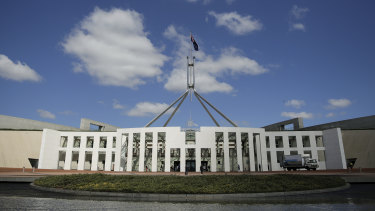 Today’s Federal Parliament is, of course, almost unrecognisable compared with the relatively small operation that ran the country during the world wars.Credit:Alex Ellinghausen

But it never reached the point that it reduced the numbers of MPs sitting in Parliament to the bare minimum to get legislation passed, as is planned for next week.

Even a Canberra air crash in August 1940 – less than a year into the war – that killed three members of the Australian cabinet, the Chief of the General Staff and four air crew, did not stop Parliament.

The then prime minister, Robert Menzies, of the Australian United Party, fronted up to the House of Representatives the very next day to speak of "a dreadful calamity". Each of the three cabinet members – the minister for the army, Brigadier Geoffrey Street, the minister for air, James Fairbairn, and the minister for scientific and industrial research, Sir Henry Gullett – "had a place not only in the cabinet, but in my heart," Menzies said, before announcing a cabinet reshuffle to ensure his government could continue operating with a semblance of normalcy.

An election was held a month later, and Menzies' government, weakened, ended the following year.

Parliament under a Labor government continued as scheduled as the war raged in Europe and soon, in the Pacific.

Even the Spanish influenza pandemic of 1919 did not cause the Australian Parliament, which sat in Melbourne, to reduce its sittings.

However, disagreements between the states on how to handle the pandemic, and unilateral state decisions to close their borders, caused Australia's federation – less than two decades old – to creak.

The federal government, only just beginning to recover from the disaster of World War I, wasn't in a strong position to wield influence over how to fight the pandemic anyway – there was no Commonwealth health department until 1921.

The federal MPs also did not endear themselves to the nation when, at a parliamentary adjournment, they boarded trains from Melbourne bound for their home electorates – and soon after declared the train system should shut down.

Today's Federal Parliament is, of course, almost unrecognisable compared with the relatively small operation that ran the country during the world wars.

During parliamentary sitting periods, the place also teems with hundreds of lobbyists and other visitors.

In a time of social distancing, self-isolation and bans of gatherings of more than 500, it would – if "business as usual" were allowed to continue – prove a veritable Petri dish for COVID-19.