I’ll drink to that! Aldi and Sainsbury’s become first UK supermarkets to sell Pink Prosecco while Brad Pitt and Angelina Jolie launch their own £12 white wine exclusively at Co-op

Pink Prosecco will arrive on the shelves of UK supermarkets from next week after a change in Italian law allowed the sparkling wine to be made with Pinot Noir grapes for the first time.

Both Sainsbury’s and Aldi will stock their own brand’s of Prosecco rosé from next week while PINK Prosecco, one of the first producers of the new fizz, have had to create a waiting list for customers amid high demand.

It comes as FEMAIL can exclusively reveal that Chateau Miraval estate owned by Brad Pitt and Angelina Jolie, has launched a brand new wine exclusively at Co-op stores.

Following popularity of its ‘Studio by Miraval Rosé’, the Hollywood A-listers have released its first white wine from their jointly-owned Miraval estate in time for Christmas.

Pink Prosecco will arrive on the shelves of UK supermarkets this week after a change in Italian law allowed the sparkling wine to be made with Pinot Noir grapes for the first time. Both Sainsbury’s (left)  and Aldi  (right) will stock their own brand’s of Prosecco rosé from next week while PINK Prosecco, one of the first producers of the new fizz, have had to create a waiting list for customers amid high demand

Not yet available anywhere else in the UK , the £12 bottle is available in selected Co-op stores nationwide.

Produced in partnership with the Perrin Family, Studio Blanc by Miraval 2019 (12% ABV) is made from the Rolle grape, most commonly known as the Vermentino grape.

With a nose of citrus peel and subtle floral notes, this mouth-watering white has a pure, refreshing palate of pear, green apples, tangy lime acidity and a hint of almond on the finish.

Benjamin Cahill, Co-op’s Wine Buyer told FEMAIL: ‘It’s another ‘first’ for Co-op and we are absolutely thrilled to showcase this stunning wine from the brilliant Famille Perrin. If you like Albarino, Gavi or subtle examples of Sauvignon Blanc then this wine is a must-try. Appropriately, given its name, this wine truly hits all the right notes.’

Meanwhile, Co-op rivals Sainsbury’s and Aldi are both leading the race to get Pink Prosecco on UK shelves in time for Christmas.

It comes as PINK Prosecco, one of the first producers of the new fizz who are selling their bottles online, say they’ve had so many enquiries they’ve even had to create a waiting list for customers, while more than 370,000 enthusiasts have liked the drink’s Facebook page, with many revealing they ‘can’t wait’ to get their hands on a bottle.

Since 2009, Prosecco has held DOC protected status within the EU, which means all bottles produced with Prosecco label must be made in the Treviso and Trieste regions of northern Italy and are subject to a quality standard.

While sparkling rosé already graces many a UK supermarket shelf, until recently the Italian Prosecco council (also know as the Consorzio Prosecco DOC) stated that grapes used must be at least 85 per cent Glera, meaning the fizz will always be white.

But in May last year, the council opted to allow bottles made with a mix of Glera and Pinot Noir grapes to be classified as Prosecco DOC.

This took a year to be finally approved, with production of the wine beginning in May 2020 and bottle just being ready for production now.

Like a white Prosecco, the rose variation must still be produced from a majority of Pure Glera grapes, but it will also include up to 15 per cent red Pinot Noir variety of grapes to achieve its pink hue.

Sainsbury’s customers will be able to sample two new kinds of rosé Prosecco this November, both with a surprising, fresh and fruity flavour. 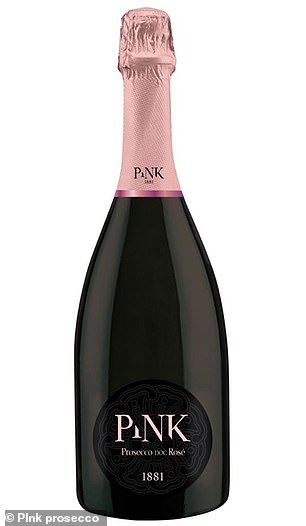 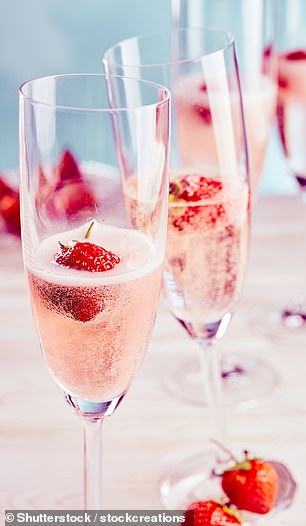 PINK Prosecco, one of the first producers of the new fizz, say they’ve had so many enquiries they’ve even had to create a waiting list for customers, while more than 370,000 enthusiasts have liked the drink’s Facebook page, with many revealing they ‘can’t wait’ to get their hands on a bottle

In addition to their £10 Taste the Difference Prosecco DOC Rosé Brut the supermarket will also be selling Valdo Prosecco Rosé.

The grapes are Glera (85-90%) and Pinot Nero vinified (10-15%) and are sourced from the provinces of Belluno, Gorizia, Padova, Pordenone, Treviso, Trieste, Udine and Venezia e Vicenza.

Sainsbury’s say their new variety is delicate and fresh with elegant flavours of strawberries.

The grapes are sourced from the Veneto region of North-East Italy where the traditional white Glera is given a summery pink hue with the addition of Pinot Nero.

Lisa Rogerson, Technical Manager and Winemaker at Sainsbury’s said: ‘We are thrilled to be launching Rosé Prosecco ahead of the festive period and are confident that this launch will really sparkle! The first brand to hit UK shelves, PINK is made by some of the finest winemakers in Treviso, and in a winery owned by the Vice-President of the Prosecco Council – guaranteeing the best quality

‘The nation’s love of all things rosé has continued to soar this year, and coupled with the continuing popularity of Prosecco, this brand-new wine is set to take UK shoppers by storm.’

Last year, Bibdendum wine who supply alcohol to bars and restaurants across the UK, revealed Pink Prosecco could be hitting the market in 2020.

Throughout 20109, sales of the fizz saw double-digit growth, along with one in four consumers in bars regularly ‘drinking pink’.

Aldi, who often win awards for their best selling wine have also joined the race to be among the first sellers, with their own brands being available in stores from Monday.

Their bottle is just  £6.49, and will be available online and in stores.

Aldi’s Mistress of Wine Sam Caporn told FEMAIL: ‘Shoppers might have already enjoyed Italian rosé (or rosato) sparkling wine, but it won’t actually have been Prosecco, because pink Prosecco hasn’t previously been permitted. Meanwhile, the pink fizz has already been spotted by top restaurateurs, including GQ Food & Drink Award winner Adam Handling (pictured)  whose group also won the Wine List of the Year award in 2019

‘Prosecco (like Champagne) is governed by strict regulations and Prosecco DOC has to come from grapes grown exclusively from nine provinces in the north east of Italy, and there are many rules in place regarding how it can be produced. Like standard Prosecco, the new rosé variety must be made primarily from Glera grapes but with the addition of Pinot Noir.’

Aldi say their Prosecco Rosé DOC is a soft pink colour with elegant notes of summer fruits on the nose. On the palate there is a delightful blend of strawberry and raspberry red berry fruits with a hint of white peach, finishing with a gentle citrus twist.

They will also stock a miniature form  of the drink for those looking for a quick fizz fix which costs £2.29 for 250ml.

Julie Ashford, Managing Director of Buying at Aldi UK, added to FEMAIL: ‘We’re over the moon to be able to provide our loyal customers with the first bottles of Prosecco Rosé DOC available on British supermarket shelves! Before their divorce, Brad Pitt and Angelina Jolie purchased the champagne house Fleur de Miravall in France and still jointly own it.  Their latest drink is exclusive to CO-OP. Pictured at the By the Sea Premiere in November 2015 in LA

‘Prosecco is one of our best sellers and shoppers can’t seem to get enough of pink wines so far this year, so a Prosecco that’s pink is sure to get the nation popping bottles. It’s been a pleasure to work with the Italian suppliers on creating such an exciting new product, and we can’t wait for our customers to try this tipple.’

Meanwhile, the pink fizz has already been spotted by top restaurateurs, including GQ Food & Drink Award winner Adam Handling, whose group also won the Wine List of the Year award in 2019.

The first shipment of Prosecco DOC Rosé from leading wine-makers Villa Sandi will be served with a specially created pink afternoon festive tea at Adam Handling Chelsea from Saturday 21st November until the New Year.

As the UK awaits its first taste of Prosecco DOC Rosé, the pastry team at Adam Handling Chelsea headed by Chris Underwood has been working on a beautifully festive pink-themed afternoon tea to match the wine.

‘Prosecco is the best-selling sparkling wine in the UK, and there’s been so much excitement around the introduction of the Rosé version. We’re really happy to be able to be the first to offer a special Afternoon Tea full of festive flavours, and to serve it with a delicious wine which is so much fun, and livens up the whole table,’ Adam Handling told FEMAIL.