Glebe used to boast a shop that sold carrot cake like this, where the real deal was not the cake, but the icing. Pippin has the thickest, richest, most luscious icing you can imagine, capped with some good, old-fashioned coups de theatre, like the walking legs with no body and speed-of-light costume changes. The main bulk of the icing consists of snappy, slithery, sexy dancing (choreographed by Chet Walker in the unmistakable idiom of the show's original choreographer, Bob Fosse), eye-popping acrobatics and full-frontal theatricality. 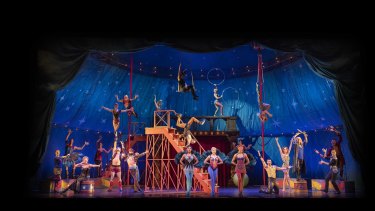 Pippin is not short on full-frontal theatricality.Credit:Brian Geach

The cake, by contrast, is a story as thin as a wafer and music that was only half-baked when penned. Think of the worst songs in a musical you've ever heard, and Stephen Schwartz's shrieking melodies and sometimes inane lyrics in Pippin will give them a run for their money.

So the curious question that emerges is this: does the icing justify intermittently choking on the cake? And the surprising answer is yes. In a dazzling presentation of a modest piece, the dancing, performances, costumes, set and acrobatics are all so brimming with pizazz that you're still smiling, even when the music is lacerating your ears. And, to be fair, Schwartz and Roger O Hirson's show-within-a-show conception of a troupe of entertainers telling the story does work a treat, and they did create some fun characters. 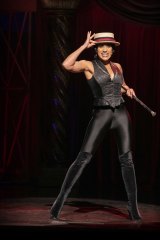 The Leading Player is realised with boundless zest by Gabrielle McClinton.Credit:Brian Geach

Heading the pack is Leading Player, a cross between a ring-master, Shakespeare's First Player and the Emcee from Cabaret, realised with boundless zest by Gabrielle McClinton. Then there are two characters that the writers could have leant on more: Fastrada and Berthe. The former is dazzlingly performed by Leslie Bell, who also sets the bar improbably high for the dancing, and the latter by a fearless and amusing Kerri-Anne Kennerley, whose trapeze routine must have had the production's insurance broker wincing. Finally there's Simon Burke, enjoying himself immensely (as he always seems to do) playing the despotic Charles – as in Charlemagne.

Yes, for those you who've come in late, the character of Pippin is based on Charlemagne's son, although you have to read history through smudged spectacles to see much of a connection. The rather wet titular role is played by Ainsley Melham, who brings more spark to the part than is on the page, and who makes the character sufficiently endearing to keep us on side, despite being saddled with singing several of the awful songs.

Of course the music is very much of its time, as is the show's implicit idealism – a quality that was running amok in 1972, and which now seems as close to extinction as koala bears. It's the kind of idealism that's more or less a synonym for naivete, and that can make the show's moral dimension thin on substance and thick on treacle.

Lucy Maunder and Euan Doidge play the other leads, while director Diane Paulus revisits her Broadway production (including using American accents), applying a phenomenal eye for maximising each scene's visual potential, from swirling movement to striking tableaux. The ensemble members are spirited and well-drilled, the acrobats a match for anything encountered in certain Canadian extravaganzas, and the lighting and sound excellent.

There are some moments of relief among the songs, but as a musical event Pippin is much less forgivable now than it was in 1972. As a visual experience, a night of fun and just the return of musical theatre, however, it could not be recommended more highly.