‘This series will cause eating disorders’: Pressure grows on Netflix to CANCEL its new show Insatiable after more than 100,000 sign a petition saying the trailer promotes ‘fat-shaming’ and ‘toxic beauty’

Streaming giant Netflix is under pressure to shelve the forthcoming release of a new show, after viewers said the series would ’cause eating disorders’.

More than 110,000 have now signed a Change.org petition slamming the trailer for the Netflix original Insatiable, which is due for release on August 10th.

The two-minute trailer for the teen drama sees a high school student dubbed ‘Fatty patty’ bullied by her classmates about her weight.

Patty (Debbie Ryan) has her ‘jaw wired shut’ during the summer vacation and returns slimmer – but determined to enact revenge on those who bullied her.

When the trailer aired earlier this month, critics, led by social activist Florence Given, accused the show’s makers of ‘fat shaming’ and launched a petition to cancel it. 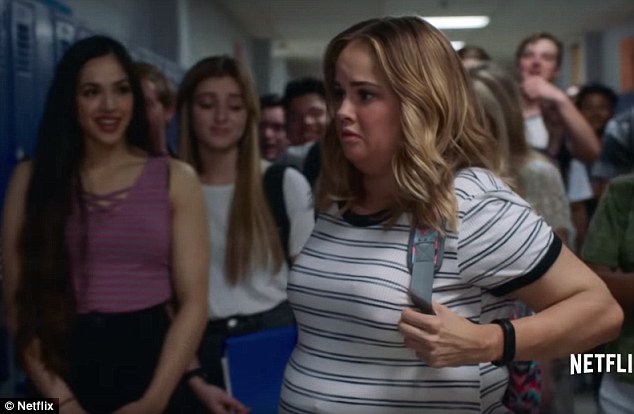 Netflix is facing calls to axe its latest original series, Insatiable, after a trailer aired which showed teenager Patty (Debbie Ryan) being bullied about her weight by her class mates 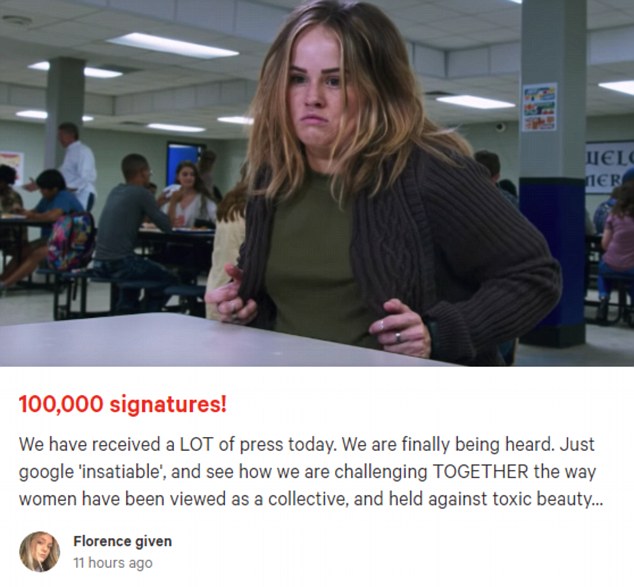 Social activist Florence Given began a petition against the show, saying that it makes light of body-shaming and could prove harmful to a vulnerable teenage audience 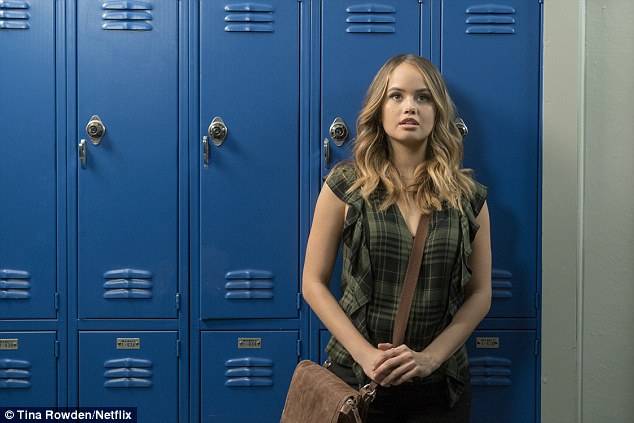 Petition organisers said the show would cause ‘eating disorders’ and called for it to be shelved before its release date on August 10th; the show sees Patty’s physique transformed after she has her ‘jaw wired shut’. She returns to school in September slimmer and determined to get revenge on the bullies

The petition has since gathered huge momentum, with social activist Florence Given, who started it, saying: ‘This series will cause eating disorders, and perpetuate the further objectification of women’s bodies.

‘The trailer has already triggered people with eating disorders. Let’s stop this, and protect further damage.’

On social media, others lent their support to the petition, with one writing: ‘(The show) promotes fat-shaming, teaches young people that if you don’t eat you’ll become skinny and desirable, romanticizes revenge fantasies, shows that you’re only deserving of love and popularity if you fall into society’s definition of beauty.’

Starring alongside ex Disney star Debby in the new show is actress Alyssa Milano, who will play Patty’s mother in the controversial series.

The 45-year-old actress has made headlines recently for her involvement in catapulting the #MeToo movement into the spotlight. But people are now criticizing the activist for participating in a ‘problematic’ TV series.

On Twitter, Alyssa defended her role with a statement that read: ‘We are not shaming Patty. We are addressing (through comedy) the damage that occurs from fat shaming. I hope that clears it up.’

Her statement was in response to another person who said the show was ‘disgusting’ and Alyssa should be ashamed because she is the ‘face of the women’s movement.’ 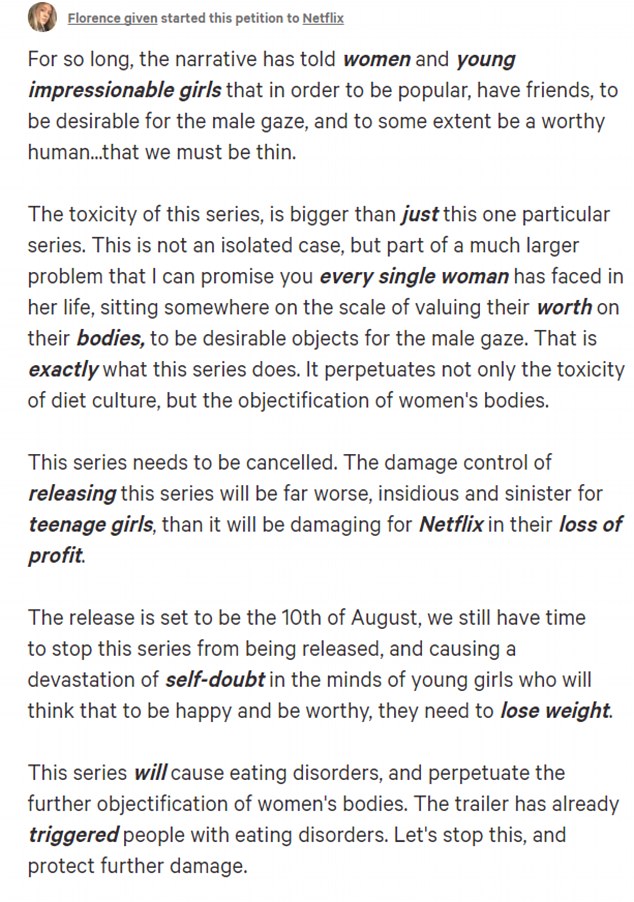 ‘This series needs to be cancelled:’ Petition lead Florence Given gives her reasons why she thinks the series should never see the light of day 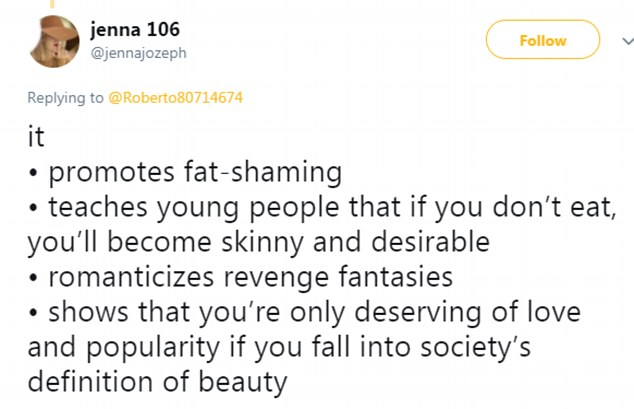 Concerned: One Twitter users said the show was promoting ‘fat-shaming’ because of its narrative about Patty once she loses weight 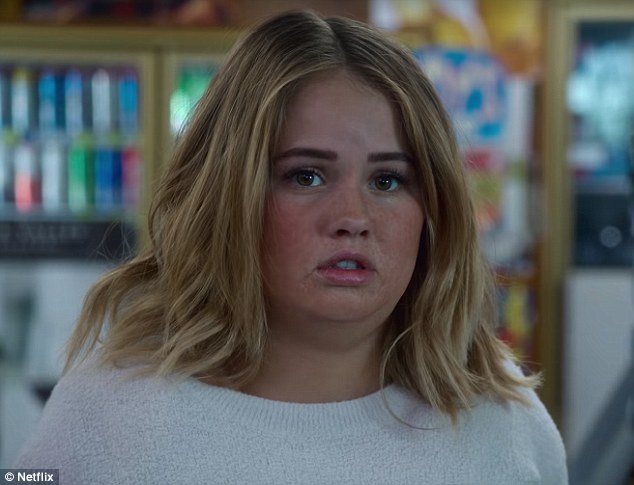 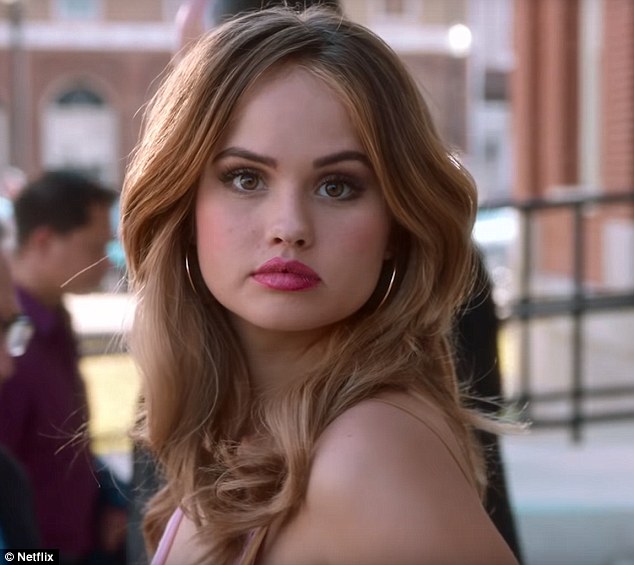 Transformation: After one summer, Patty returns to school looking thin and beautiful 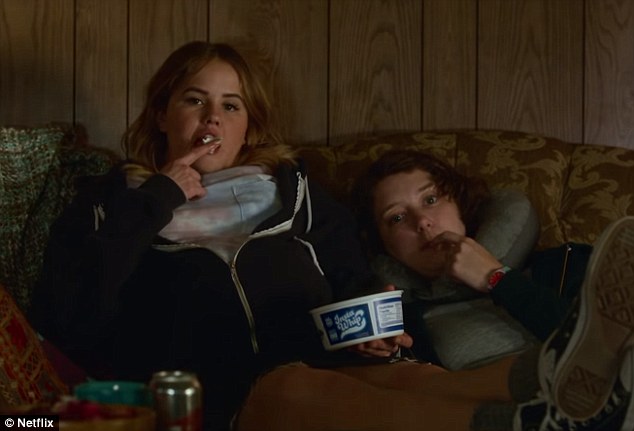 Triggering: An issue people have about the show is that it is informing teenagers about how they should ideally look if they want respect from their peers

But many others were in agreement that based on the trailer, the new show appeared to promote an ideal narrative about what would happen if someone were to lose a significant amount of weight.

‘Can we get a show where a fat character gets Revenge on everyone who’s sh**** to them while still being fat, and is recognized as badass and funny and super hot, because that would be something actually fresh and cool and not the lukewarm watery oatmeal that is Insatiable,’ one person wrote in a long Twitter rant.

Debby has not directly released a statement about her new role as Patty since the backlash of the trailer. 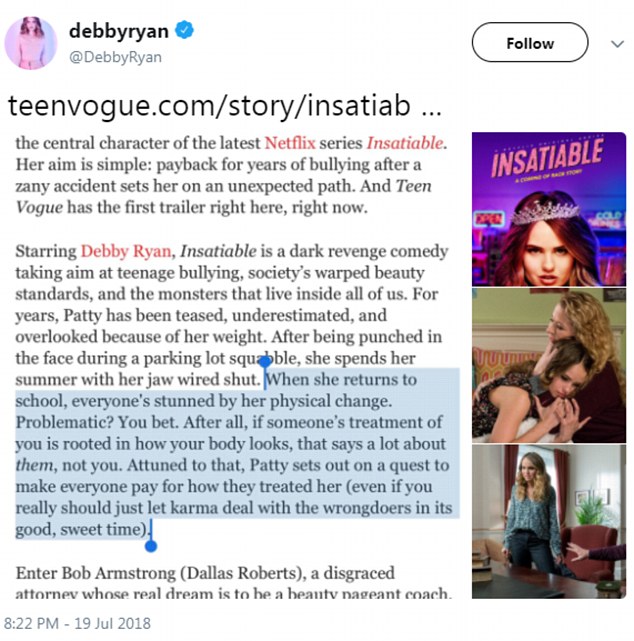 Criticized: Debby did not release a statement but instead highlighted a few lines from a Teen Vogue article about the new show 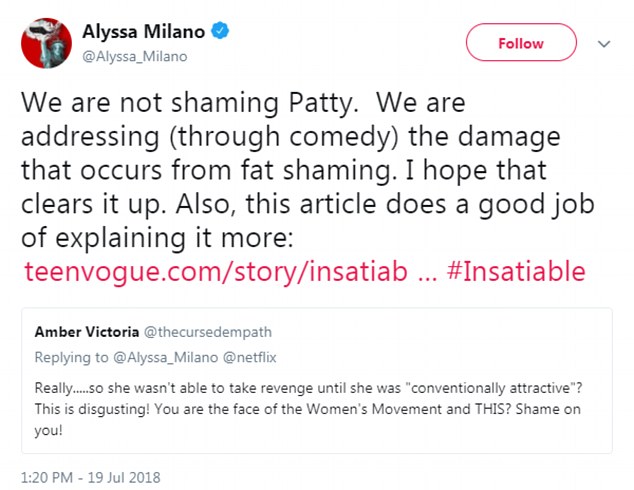 Disagreement: Alyssa Milano, who stars as Patty’s mom in the show, said the new comedy was not ‘fat-shaming’ but instead addressing specific issues

But she did post a paragraph from a recent Teen Vogue article that described the new comedy series.

The line she highlighted read: ‘When (Patty) returns to school, everyone’s stunned by her physical change. Problematic? You bet. After all, if someone’s treatment of you is rooted in how your body looks, that says a lot about them, not you.

‘Attuned to that, Patty sets out on a quest to make everyone pay for how they treated her (even if you really should just let karma deal with the wrongdoers in its good, sweet time).’

Later in the Teen Vogue article, Debby encouraged readers to avoid judging the message and narrative of the show early on.

Instead, she wanted people to give it a chance to understand the depths of each character and the issues the show brings up.

Others suggested the show should be given a chance to air before judgement is made.

On Twitter, @bxn_soIo wrote: ‘re: insatiable, there is a chance that the trailer is misleading and was purposely created this way in order to create drama over the show as a marketing/publicity stunt… its kind of unlikely, but it’s not fair to petition the show to be cancelled before its aired.’

Another said censorship was not the way to encourage healthy debate, @finnelcl wrote: ‘The fact that there’s a petition to stop #Insatiable is terrifying for me. The censorship of ideas in fiction is the start of policing imagination and once that happens we no longer live in a free society.’

Netflix is no stranger to controversy within its original shows that are targeted towards teens. In the past, the streaming network was under attack for it’s show 13 Reasons Why and how it portrayed issues relating to suicide and bullying.

The Crown creator says parallels between Meghan and Diana are obvious