Natural beauty! Fresh-faced Princess Beatrice reads from children’s book Tad by Benji Davies as it wins a national prize – days before what would have been her wedding to fiance Edo

Princess Beatrice flashed her glittering engagement ring as she announced the winner of the Oscar’s Book Prize ahead of her postponed wedding date this week.

The Queen’s granddaughter, 31, was set to wed fiancé Edo Mapelli Mozzi, 37, at St James Palace on Friday, but the wedding was postponed amid the coronavirus pandemic.

The royal, who is patron of the children’s prize, shared a clip announcing the winner of Oscar’s Book Prize as Tad by Benji Davies, saying: ‘I really look forward to celebrating in person as soon as we can.’

Princess Beatrice, daughter of the Duke of York and Sarah, Duchess of York, is currently spending lockdown with Edo and future mother-in-law Nikki Shale at her £1.5 million country house near Chipping Norton. 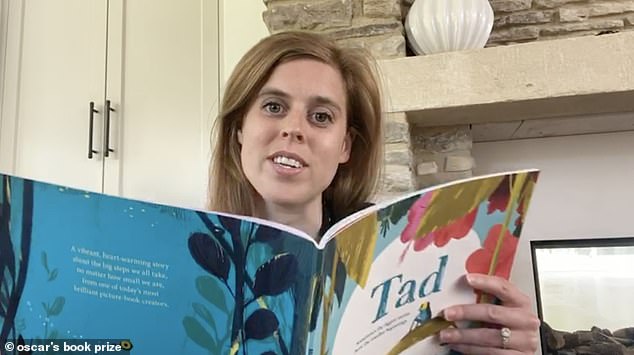 Princess Beatrice, 31, flashed her engagement ring as she announced the winner of the Oscar’s Book Prize, which she has been patron of since 2017

Princess Beatrice, who was diagnosed with dyslexia aged seven, became patron of the Oscar’s Book Prize in 2017.

The £5,000 literary award, supported by Amazon and the National Literacy Trust, recognises great storytelling in books for children under five which have been published within the past year.

The winning book, Tad, is about ‘growing up’, the smallest tadpole in a big pond. Worried about being left behind by her brothers and sisters, Tad one day takes a big leap into an adventurous future.

In a video filmed at Nikki’s home, the royal said: ‘I felt so lucky to be able to read each of shortlisted books for Oscar’s Book Prize. 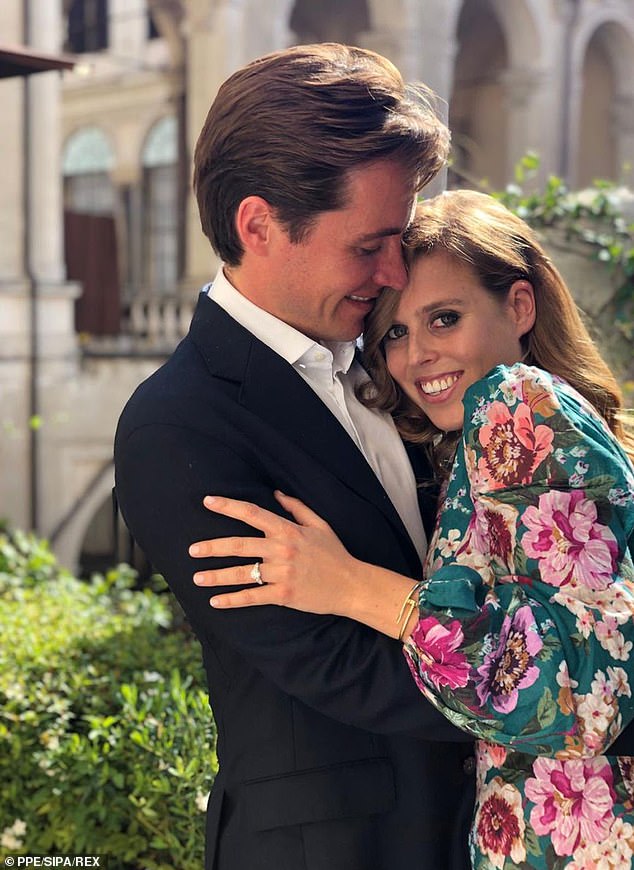 The video comes days ahead of what would have been Princess Beatrice and her partner Edo’s wedding day, with the couple planning to marry at St Jame’s Palace on Friday

‘This year the quality of entries was unprecedented, and the judges decided to extend the shortlist from five to six.

‘Benji Davies, congratulations on what is a remarkable book of a lovely story. I had so much fun reading it myself.’

She went on: ‘I know we’re not together in person but I want to thank every single one of you for being involved for building this world of wonder for young people to jump into.’

She added: ‘I’m so happy that we get to celebrate this remarkable entry. I really look forward to celebrating with all of you in person as soon as we can.’ 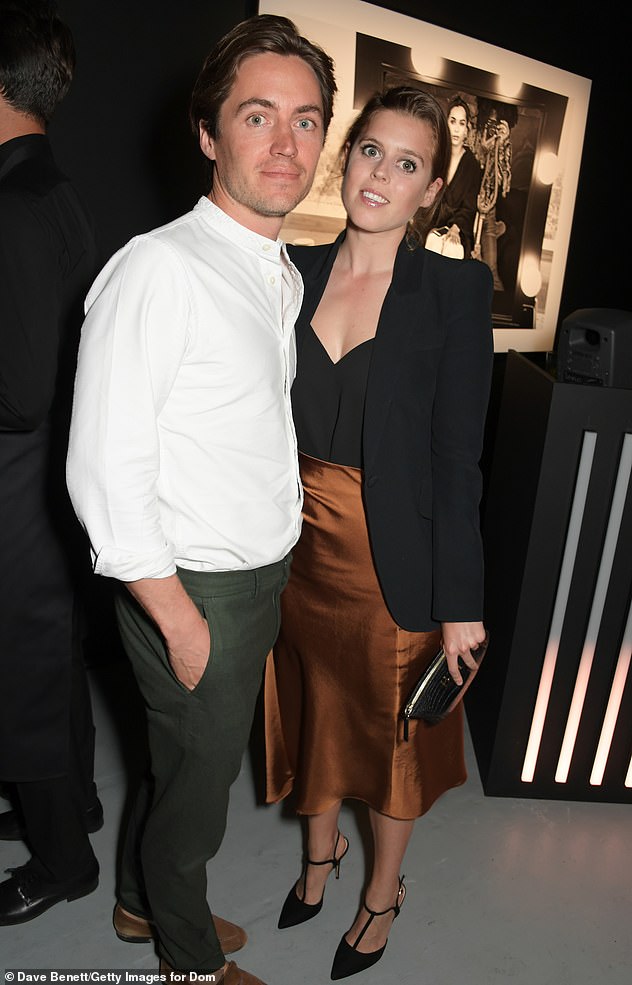 Beatrice was overjoyed after becoming engaged on a weekend trip to Italy last September, and the couple said they could not wait to be married.

But her nuptials were overshadowed by the scandal that has engulfed her father Andrew, with the date changing twice to accommodate the Queen’s second son.

Amid the controversy over her father, the princess opted for the more intimate, low-key option of the Chapel Royal and was due to invite 150 guests.

But plans were changed after the Government called on all people in the UK, particularly the over-70s, to avoid all non-essential contact and travel as part of unprecedented peacetime measures aimed at controlling the spread of Covid-19. 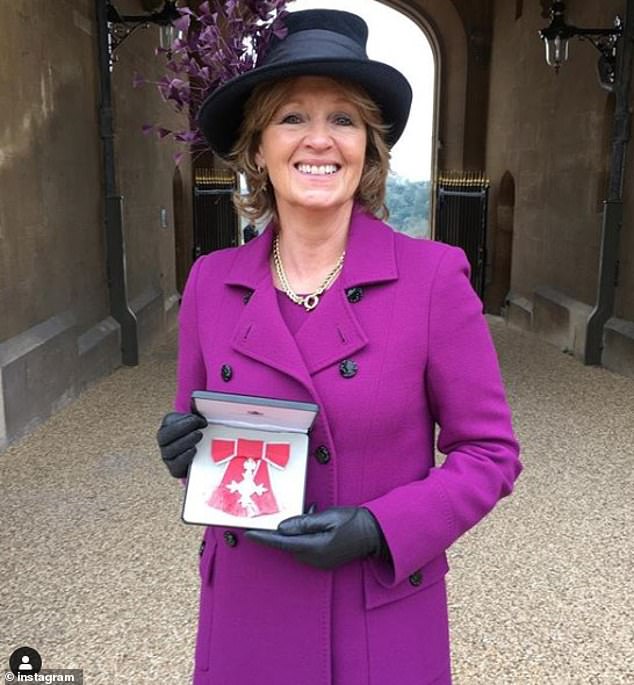 The couple, who were set to marry on Friday, are staying with Edo’s mother Nikki Shale at her £1.5 million home in Chipping Norton (pictured, Nikki)

And in April, Boris Johnson put a ban on weddings as the virus raged through the UK public.

Sources confirmed the wedding had been postponed earlier this month, telling People that the invitations were never sent out, due to complications with the virus.

While Duchess of York, 61, and her ex-husband Prince Andrew, 60,  have been joined by Princess Eugenie, 30, and her husband Jack Brooksbank, 34, at their home the Royal Lodge in Windsor during the pandemic, Beatrice and Edo have stayed with his mother.

Speaking on the City Island podcast, Fergie explained: ‘Edo and Beatrice have been living with her future mother-in-law who is lovely…I’m missing my [other] daughter but it’s just like everybody else, we are just the same family as everybody else.’ 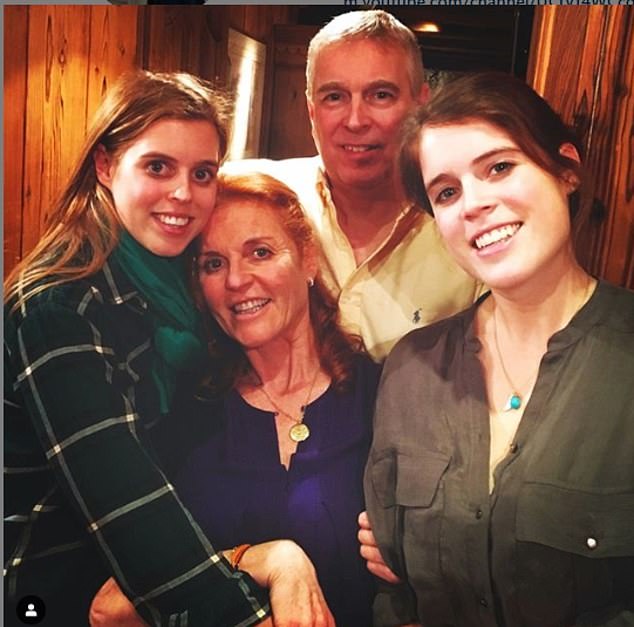