Princess Eugenie has shared a series of previously unseen wedding photographs as she posted a gushing tribute to her husband Jack Brooksbank on their second anniversary.

The Queen’s granddaughter, 30, posted an Instagram video online today showing a compilation of unseen holiday photographs and wedding snaps while the song ‘Baby It’s You’ by indie band London Grammar played in the background.

Among the images were three pictures from their October 2018 wedding which have not been shared with the public before, including a snap of Eugenie and Jack, 34, sharing a laugh with one another after the ceremony.

Sharing the post online, Princess Eugenie, who is expecting her first child with Jack in the spring, wrote: ‘Been the best 2 years married to you and 10 years with you in total.. happy memories always my dear Jack.’ 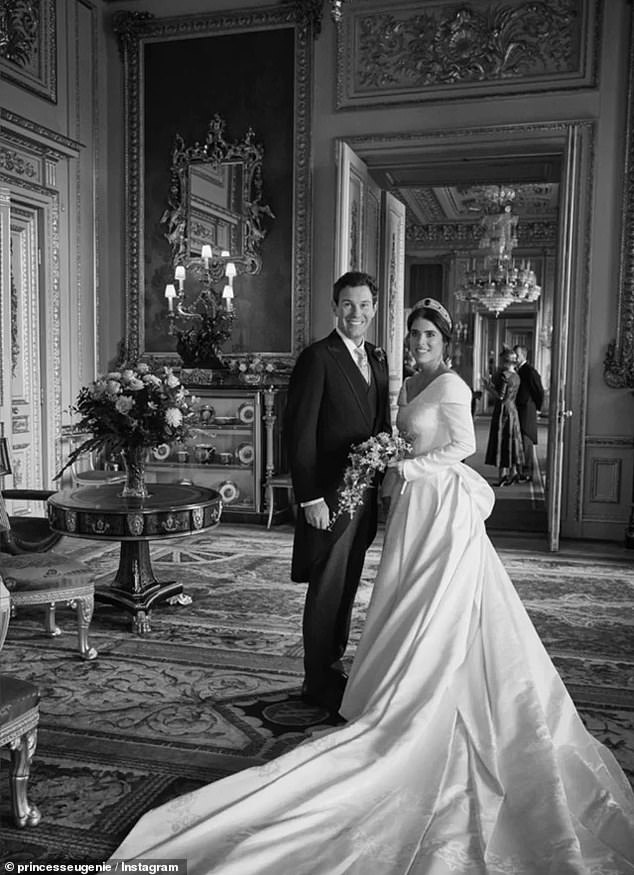 Princess Eugenie, 30, has shared a series of previously unseen wedding photographs as she posted a gushing tribute to her husband Jack Brooksbank, 34, on their second anniversary. 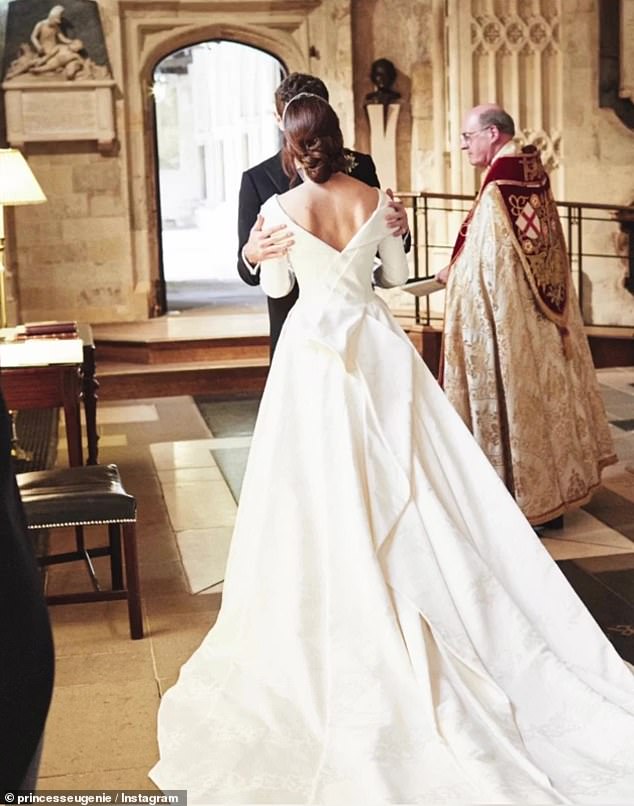 In another photograph shared by the royal today, the couple can be seen enjoying an intimate private moment after their wedding ceremony

In one of the photographs, which was taken from behind, the newlyweds could be seen enjoying a kiss after the ceremony while in another, they beamed as they posed in one another arms.

Other pictures shared in the compilation included holiday photographs of the couple from over the years, with one showing them posing alongside a huddle of penguins.

Meanwhile Princess Beatrice’s husband Edo Mapelli Mozzi was also among those who also congratulated the couple by liking the post. 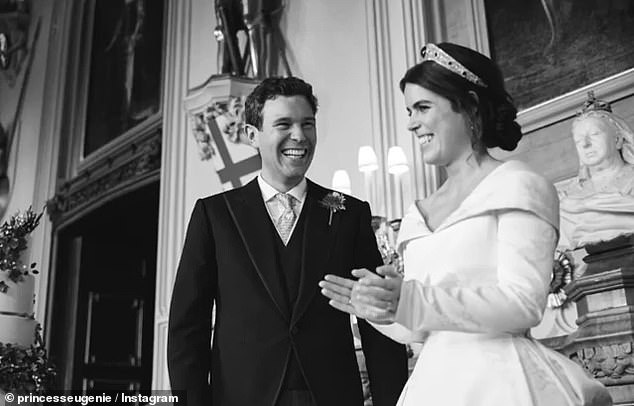 Meanwhile in a third image, the newlyweds appear to beam and laugh together while a glimpse of their wedding cake can be seen in the left hand side of the picture

Their wedding anniversary comes weeks after the Queen’s granddaughter, 30, and her husband of two years Jack Brooksbank announced they are expecting the baby in early 2021.

A friend of the couple told People that while the ‘fun’ royal will likely be ‘more of a bohemian parent’, Jack is likely to be the ‘calm and chilled’ influence.

Princesses Eugenie and Beatrice’s mother Fergie has shown off her playful side during lockdown by donning costumes and crafting sets for her Fergie and Friends YouTube series.

In recent weeks, she’s been sharing glimpses of her cooking talents on her channel – including the likes of peanut butter toast-shaped bears and gingerbread men. 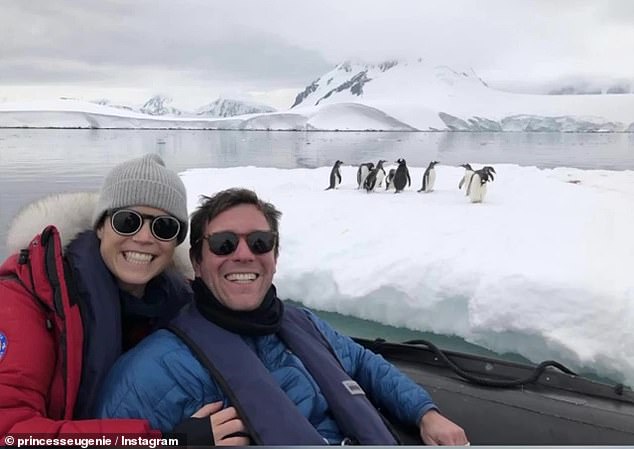 As well as the wedding photographs, the Queen’s granddaughter shared pictures from various holidays with her beau, including one where they wrapped up warm to  look for penguins

A family friend also claimed that titles ‘don’t matter’ to Eugenie and Jack, who will raise the child at their home of Kensington Palace, and said they just want ‘a happy healthy child.’

Speaking to Vanity Fair’s Katie Nicholl, the source revealed: ‘Eugenie knows that a title can be a curse as well as a blessing and she and Jack want their child to live an ordinary life and eventually work to earn a living.’

Sources also said the couple will choose an ‘ordinary’ name for their first born. 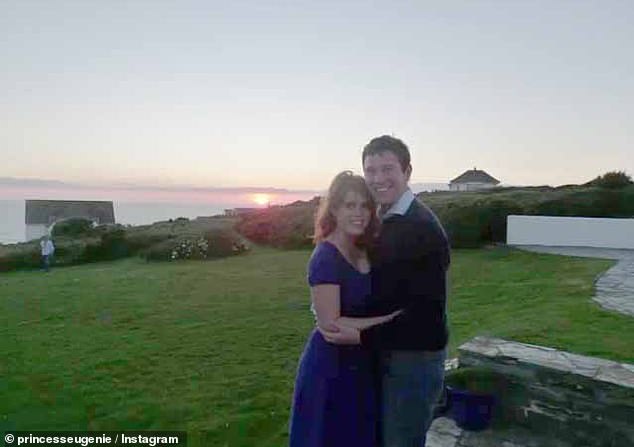 The mother-to-be posted the compliation of images alongside a soundtrack of Baby It’s You, by indie pop band London Grammar

According to the regulations of the House of Windsor, Eugenie’s baby will not automatically be entitled to the HRH styling, which only extends to grandchildren of the monarch.

The source said even if the Queen offered a title as a gift, it was ‘not Eugenie or Jack’s desire’ for their child to have a title.

Despite having royal titles, Princess Eugenie and her sister Princess Beatrice are not currently considered to be senior working royals, because they do not carry out duties full time on behalf of the Queen.

The sisters, who are ninth and tenth in line to the throne, both have full time jobs, and do not receive cheques from the Sovereign Grant, the government-supported fund that finances Queen Elizabeth II’s official duties. 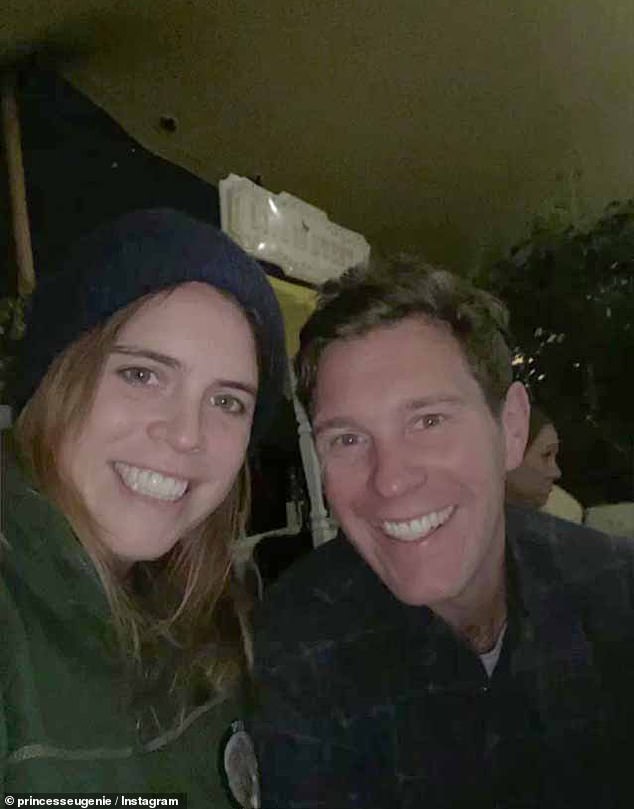 The couple, who have been together for ten years, announced last month they will welcome their first child together in early 2021

Princess Eugenie works as a director for Mayfair-based gallery Hauser & Wirth and receives no money from the Queen.

Eugenie graduated from Newcastle University in September 2009, after studying English Literature and the History of Art.

After completing her studies, Eugenie moved to New York to work for online auction firm Paddle8, before moving back to London in 2015.

She and her sister currently attend a handful of royal events a year, including occasionally joining the Queen at one of her annual garden parties in the summer, and making an appearance with other royals at Trooping the Colour.

Meanwhile Jack, who is European brand manager for Casamigos Tequila co-founded by George Clooney  does not have a title or an HRH. 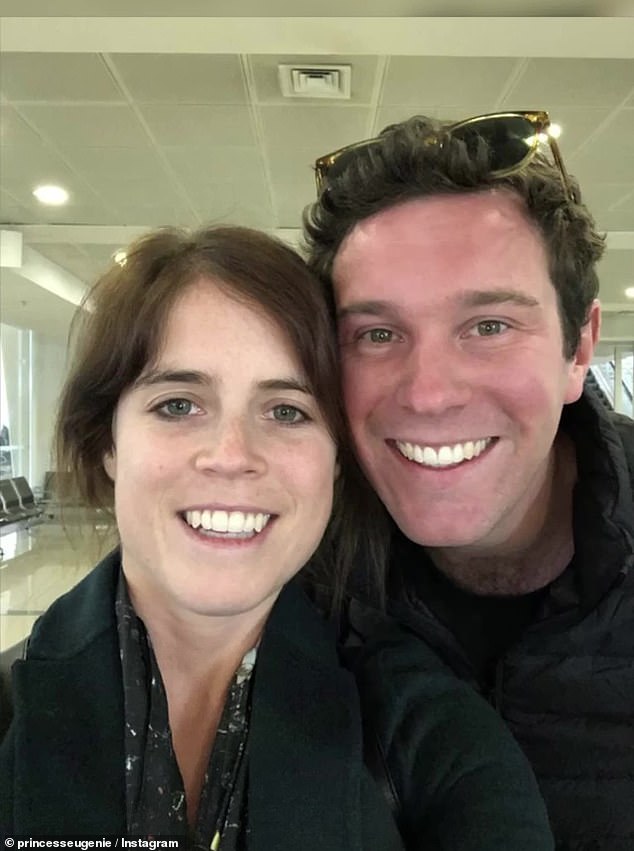 In another selfie, the down-to-earth couple posed for a photograph while travelling through an airport together

Eugenie and Jack’s child will be 11th in the order of succession, which means the Queen’s youngest son Prince Edward will slip down a place into 12th place.

The baby will be the first grandchild for Prince Andrew and Sarah Ferguson, and will be the Queen and the Duke of Edinburgh’s ninth great-grandchild.

Sharing the news on Instagram last month, Eugenie wrote: ‘Jack and I are so excited for early 2021….,’ alongside photos of baby slippers and her and Jack smiling.

Sarah Ferguson shared her excitement, writing: ‘I am so excited by the news that Eugenie and Jack are expecting their first child.

‘Thrilled for them both and in my 60th year cannot wait to be a grandmother. Welcoming a new baby into the York family is going to be a moment of profound joy.’

Eugenie and Jack, who spent lockdown at Fergie and Prince Andrew’s home on the Queen’s Windsor estate, have been seen out and about in recent weeks as they enjoy life in London ahead of welcoming their first child. 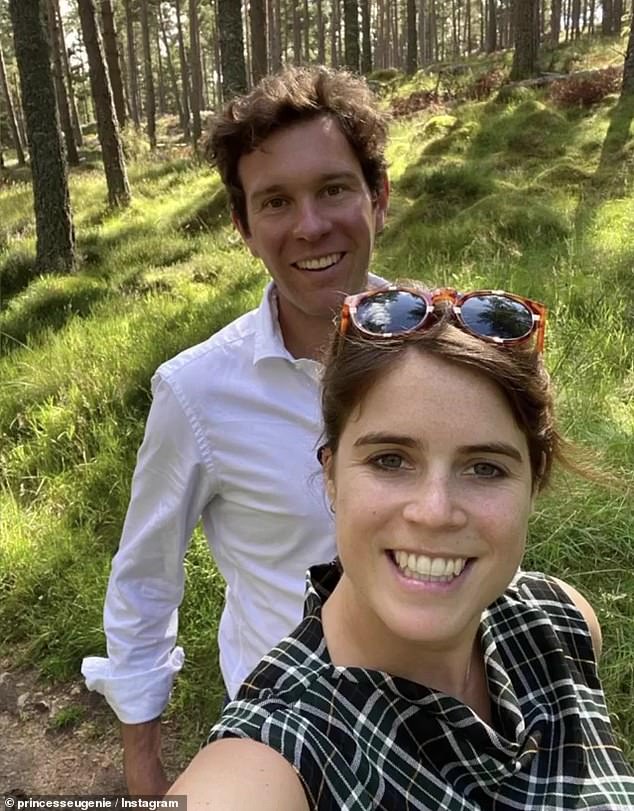 Princess Eugenie also shared more relaxed photographs of the duo, with one selfie showing the couple out on a walk through a wood

Her sister Princess Beatrice, who married property developer Edoardo Mapelli Mozzi in July, is no doubt excited to become an aunt for the first time.

The 32-year-old was seen shopping at baby shop The Little White Company last month, perhaps picking up a present for her new niece or nephew.

Bea donned a face mask as she popped into the store in London, while Edo patiently waited in the car for her – their first public appearance together since their secret wedding in the summer.

The happy news will no doubt be welcomed by grandfather-to-be Prince Andrew, 60, who remains plagued by controversy over his friendship with the late paedophile Jeffrey Epstein and Ghislaine Maxwell, who was arrested for her role in allegedly procuring young girls for the financier.

60 Christmas gifts for your girlfriend