The boys’ boarding school that was the making of a girl (and her brother Boris!): She was cut off from her parents and entirely the wrong sex, but as RACHEL JOHNSON reveals, Ashdown House gave her an education like no other 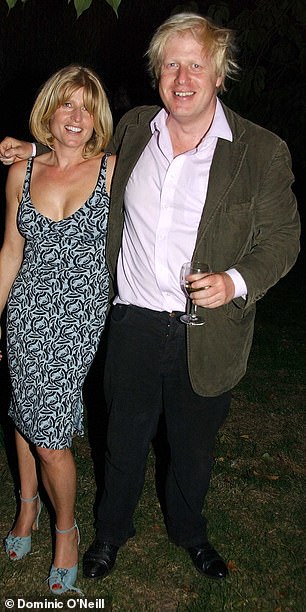 That I went to Ashdown House in the first place was due to my father’s determination to get my brother Boris into Eton (pictured together, above)

Some years ago, I was asked to address the Headmasters’ Conference and I gave an elegy to prep schools, which are going under so terrifyingly fast, shutting their doors to pupils.

After almost two centuries of ‘sossages’ and howling ‘skool dogs’ (as Molesworth would have said), it seems the end of these middle-class institutions may be nigh.

Now I find myself in the sad position of writing an obituary, instead, to my old school, Ashdown House.

That I went there in the first place was due to my father’s determination to get my brother Boris into Eton.

Do these things still matter? Who knows, but what is certain is that the experiences I had there were, in the bracing phrase, character-building to say the least.

So what was it like being the first girl sent to this all-boys prep school in the Seventies?

I was cold and hungry all the time. Rations were so short that I would huddle under my pink candlewick bedspread, sucking on a toothpaste tube to curb hunger pangs.

I once found a live maggot wriggling in my shepherd’s pie and showed the headmaster, who advised me to eat it (indeed, the maggot was probably the only nutrient served up that lunchtime).

Yet despite all this, I was happier there — shaggy, plump and the wrong sex — than I had ever been.

Unbelievable as it seems now, I wasn’t even shown around the school before we drove up the rhododendron-lined drive from Forest Row, East Grinstead, Sussex, Great Britain, the World, the Universe, the Galaxy — the address we would put on our weekly (censored) letters home.

My father Stanley hadn’t seen the school either.

He had sent us to Ashdown sight unseen, just as he also tends to buy houses without viewing them. ‘No need,’ he told me yesterday. ‘Why would I? They had a perfectly good record of getting boys into Eton.’

That first glimpse could hardly fail to impress.

The grand 18th-century mansion was the work of the architect Benjamin Latrobe, who also designed the White House, and it shows.

The handsome grey stone façade gazes across rolling lawns to playing fields and the Medway river.

As the magazine Supremo Nicholas Coleridge, who went to Ashdown a few years before me, wrote in his memoir The Glossy Years: ‘If you wanted to make a film set at a picture-perfect English prep school, you might easily choose Ashdown, with its Lutyens-style cricket pavilion, grassy ha-ha, copses of Scots pine and an ancient spreading beech tree which gave shade to a perfect lawn.’

I was joined by another girl, Margaret Clancy, who was also there because of her brother, and we excitingly had our own dorm called Pankhurst, up some twisty, creaking staircases in the roof. 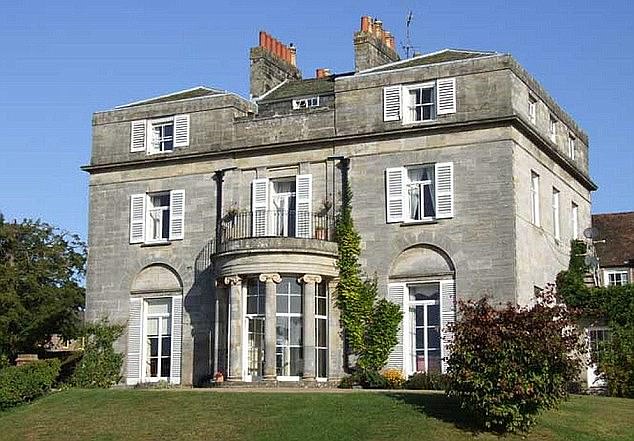 The grand 18th-century mansion was the work of the architect Benjamin Latrobe, who also designed the White House, and it shows. The handsome grey stone façade gazes across rolling lawns to playing fields and the Medway river

There was an iron bed, a window, a thin, lumpy mattress covered with that balding bedspread, and a side table on which I reverentially placed the Elizabeth Arden Blue Grass hand lotion given to me as a farewell present by my mother.

I had just turned ten.

We did have our own bathroom, so it was the Connaught as far as I was concerned, having grown up in a primitive farmhouse on Exmoor which we shared with teeming wildlife (Kate, later Baroness, Fall claimed in her new book that it was ‘so cold inside it actually snowed on my head at night’ when she came to stay).

My father chose Ashdown after ringing Clive Williams, the joint head, and telling him he had just four terms to get his eldest son into Eton — a challenge that both met, as Boris subsequently won a scholarship.

The uniform department at Harrods had to knock up bespoke kit — navy skirts and turquoise nylon roll-necks in the winter, Aertex in the summer — and it was a fait accompli

Then he said there were three more siblings after that.

‘Rachel will follow in September,’ he announced, brushing aside Clive’s protest ‘but we don’t take girls’ as a mere detail.

The uniform department at Harrods had to knock up bespoke kit for Margaret and I — navy skirts and turquoise nylon roll-necks in the winter, Aertex in the summer — and it was a fait accompli.

The ranking older headmaster, Billie Williamson (‘a terrifying, caustic Classicist’, recalls Nick Coleridge) refused to acknowledge my presence or teach us girls, or any form we were in.

His boycott lasted well over a year. One afternoon, however, he was hurling chalk and raging at the boys in 2B’s fathomless ignorance of Greek grammar (to be fair to the boys of 2B, he also called the Beatles ‘talentless baboons’).

He said anyone in 3B — i.e. the 11 year olds in the year below — would be better than the 12 year olds in 2B and the next chap from 3B who walked past his door would prove it.

Well, I was the next chap in 3B to pass by. I had to go in, stand next to him and recite all the cases taken by all the Greek prepositions.

It was only then that something in his craggy Mount Rushmore face seemed to soften for a second. By the time I left, there were enough girls for a netball team.

The other pupils were enjoyable too.

Obligatory famous pupil roll call: Damian Lewis, the actor; Viscount Linley, the designer; all my brothers, Boris, Leo and Jo; Andrew Mitchell, the ‘Plebgate’ MP; and all the Harmsworth children, whose mother ‘Bubbles’ used to hand out the prizes on Sports Day.

I loved the routine. Days started with early morning PT in the cold (only those in top form were spared — they had early morning Greek).

Lunch was usually watery mince but on Thursdays we had coronation chicken and rice followed by Arctic roll, which seemed impossibly lush. 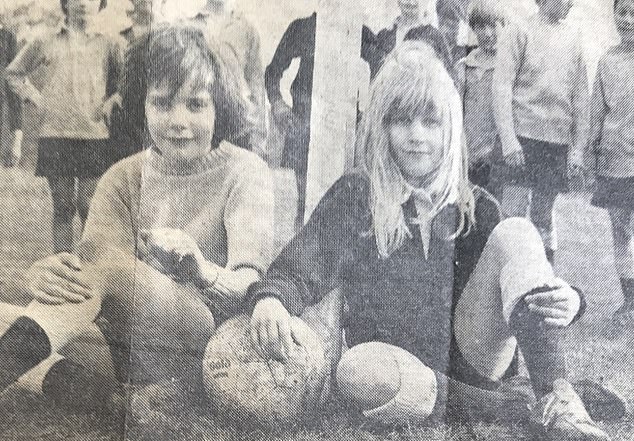 I was joined by another girl, Margaret Clancy (pictured together above) who was also there because of her brother, and we excitingly had our own dorm called Pankhurst, up some twisty, creaking staircases in the roof

After lunch we had rest: in our dorms in winter, in the summer lying under the beech tree, called Fagus, where Billie would converse in Latin about current affairs. Games. Then ‘fourses’ — another squash and biscuit. More lessons. Then high tea.

I can’t count the ways I enjoyed my time there, even though I was terribly homesick.

I saw my Brussels-based parents about twice a term, and looked forward to these rare sightings so desperately that I managed to end corporal punishment at Ashdown by mistake.

It happened after I was caught on a midnight rampage with a boy called Saville (we were raiding a locked storeroom for Mars bars).

As my punishment, I was given the choice of being beaten or missing an exeat. I chose the beating (depending on the offence it was slipper, cricket bat or golf club).

‘I realised I was never going to beat a girl and the whole thing therefore became absurd,’ recalls Clive.

We had a bath and changed our clothes (even pants) once a week. I played rugby and cricket on boys’ teams, to the slight alarm of rival establishments (one end-of-term report praised me for a couple of ‘crunching tackles’).

We girls rode in Ashdown Forest or did cookery classes with Rowena Williams, Clive’s wife, who taught me how to make a white sauce (I maintain the most useful thing I ever learnt at school). 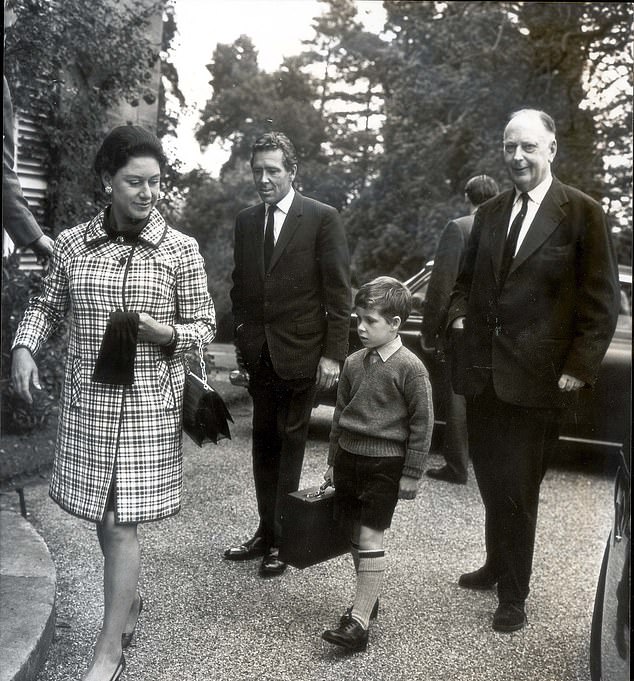 Viscount Linley, seven, is met by the head on his first day at school

It wasn’t all lashings of jolly hockey sticks, I realise now, as the school was criticised by the Independent Inquiry into Child Sexual Abuse, which heard that sexual touching at the school for 25 years from 1969 was rife.

I hate to think how my fellow Ashdownians suffered at the hands of some of the more priapic and predatory masters, and it does tarnish my memories somewhat.

Certainly not everyone has fond recollections, whatever the reason.

But it was well known among my cohort that Princess Margaret swept up and removed her son in mid-term, very suddenly.

When I asked Viscount Linley about it years later, he went white but said nothing.

I wouldn’t say they were the happiest days of my life, but I loved so much of it: the Gilbert & Sullivan productions, the sports days, the Scripture quizzes, the Scottish dancing (the Scottish Dancing Cup is the only cup I’ve ever won).

The ‘jungle’ with its slimy green swimming pool in the summer, playing British Bulldogs on the Patch (the lawn), and tennis on the grass court.

We all loved it so much that two of us sent children there (I sent my firstborn Ludo there, and Boris sent one of his there).

But as of this month, Benjamin Latrobe’s porticoed edifice, built 180 years ago, will fall dark and the corridors will no longer echo to the sounds of grubby Just Williams in corduroy shorts, and sunburnt girls in gym kit.

You may think that is for the best. But Ashdown House was the making of this girl.

Ashdown, ho, Johnson, Rachel, says
You may also like: