A protester made it onto the field during the World Cup match between Portugal and Uruguay today, but you might not know it if you weren’t on the field yourself. TV footage of the moment, which came in the match’s 51st minute, was almost nonexistant, with the protester running through the bottom left hand corner of the screen in a split-second and the referee then stooping to pick up the rainbow flag the he had been carrying.

The man, it appears from news photos, was carrying a Pride flag and wearing a shirt with the Superman logo and the words “Save Ukraine” on the front and “Respect for Iranian woman” on the back. He was eventually tackled by security and led away to boos from the crowd. 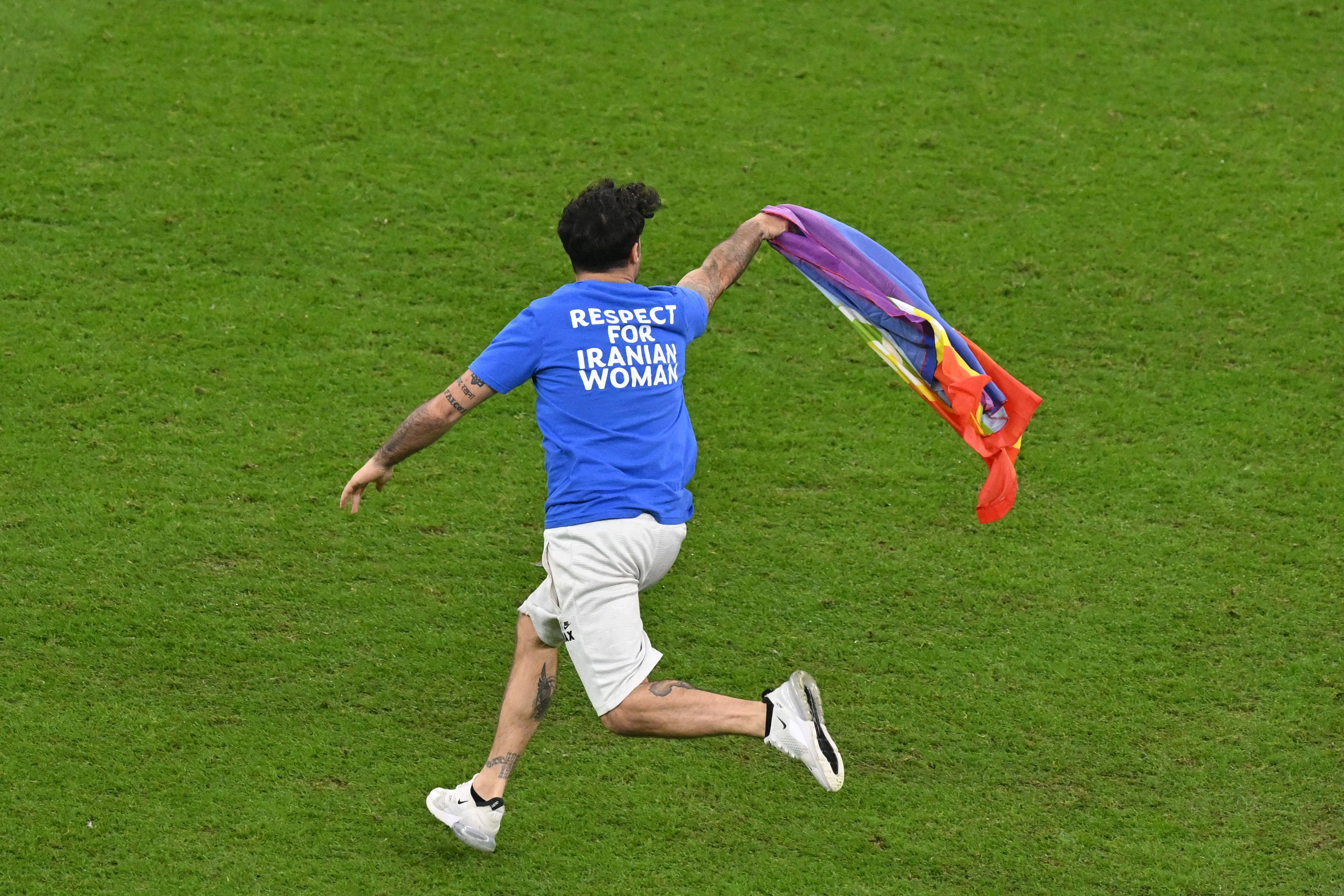 Any reference to the ongoing protests in Iran at the World Cup has been a touchy subject for that country’s leadership, which reportedly went so far as to threaten its own players and their families if Team Iran fails to “behave” during tomorrow’s match against the U.S.

Qatar’s record around gender and LGBT+ equality has also been in the spotlight. Stonewall’s Director of Communications and External Affairs, Robbie de Santos, told Deadline in the lead-up to the tournament: “LGBTQ+ people in Qatar are criminalized and persecuted for simply existing and cannot compromise who they are. It’s vital that those of us with influence, including broadcasters, make clear that they expect Qatari authorities to respect and uphold freedom of assembly and expression and the rights of all, including LGBTQ+ people.”

The executive producer of Fox Sports’ U.S. coverage, David Neal, said before the tournament that the network’s coverage would focus on the sports and not the surrounding issues. “Our stance is if it affects what happens on the field of play, we will cover it and cover it fully,” he said. “But if it does not, if it is ancillary to the story of the tournament. There are plenty of other entities and outlets out there that are going to cover that. We firmly believe the viewers come to us to see what happens on the field, on the pitch.”

Play was indeed stopped due to the protester. And while Fox has little control over the video feed, which is provided by FIFA, there did not seem to be much on-air discussion about the moment from the network’s John Strong and Stu Holden.

Strong briefly noted, “Play will be stopped here [unintelligible] someone who has come onto the field,” but may have had difficulty seeing exactly what was going on without the benefit of a close-up feed.

Deadline has reached out to FIFA and will add any comment received.

Post-match, Portugal’s Ruben Neves said, per ESPN, “We know what has happened around this World Cup. It’s a normal thing to happen. Of course, we are all with them as well. Iran as well, because I saw his shirt. I hope nothing happens to the boy because we understand his message and I think all the world understood it as well.”

‘Strange World’ To Lose $147M: Why Theatrical Still Was Best Road For Toon