The DJ and the waitress: a tale as old as time! James Kennedy’s girlfriend, Raquel Leviss, is officially working at SUR restaurant.

SUR co-owner Guillermo Zapata shared a photo of the 24-year-old pageant queen in her new uniform outside of the West Hollywood hotspot on Wednesday, April 24.

“Welcome to the SUR family,” Guillermo captioned the snap. While Vanderpump Rules has yet to officially be picked up for season 8, he tagged the show’s production company, Evolution USA, and Bravo in his post. 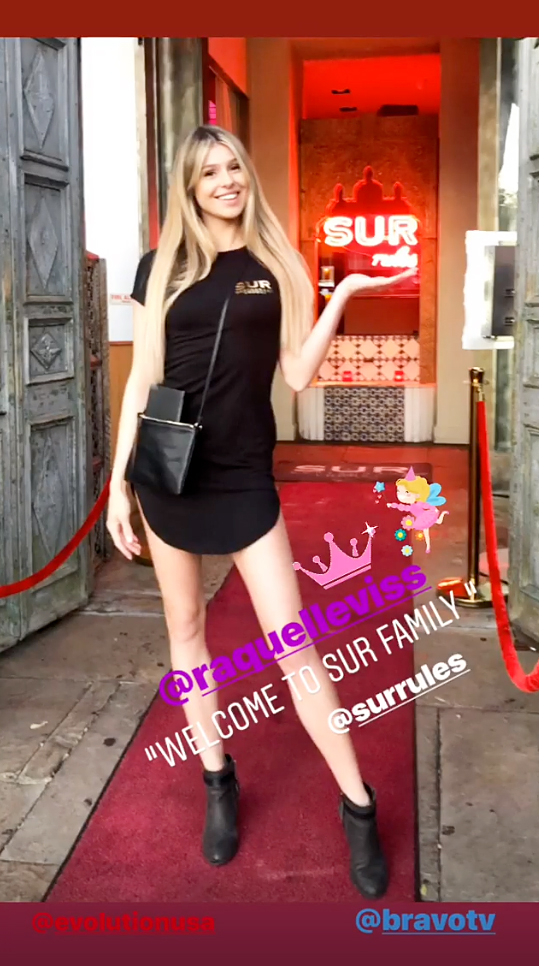 Raquel and James, who has been hired and fired several times by Lisa Vanderpump to bus tables and DJ at SUR, started dating in 2016. While she made her first appearance on Vanderpump Rules during season 5, Raquel hasn’t had a prominent role until season 7, which is currently airing.

Due to James’ issues with the main cast, Raquel has struggled to connect with the series longtime stars, including Katie Maloney, Stassi Schroeder, Kristen Doute and Lala Kent. The former Miss Sonoma County was also confronted with rumors on seasons 6 and 7 that her boyfriend of two years was unfaithful to her.

While the “Top Man” musician has denied allegations that he’s cheated on Raquel multiple times, Lala previously told Us that she’s convinced James is a cheater.

“I don’t know that I feel badly for her anymore because … it’s like seeing the murder scene and still needing more evidence,” the Give Them Lala Beauty creator told Us in December. “It’s like, ‘Okay, girl, I can’t even deal.’ Like, you’re killing my brain cells at this point, and I don’t have a lot of those to lose.”

Season 8 is expected to document Brittany Cartwright and Jax Taylor’s upcoming Kentucky nuptials. While Kristen previously revealed that Raquel and James will not be invited, the new SUR employee is holding out hope.

Time will tell if Raquel’s new role at SUR will impact Brittany and Jax’s guest list.

glass, James, Kenned, Raise, Your
You may also like: