The Reserve Bank board has used its final meeting of the year to hold official interest rates at a record-low 0.1 per cent, where financial markets and analysts expect them to remain for at least another two years.

Following its meeting, governor Philip Lowe confirmed the cash rate, sliced to 0.1 per cent last month, would remain unchanged. The bank board next meets in early February. 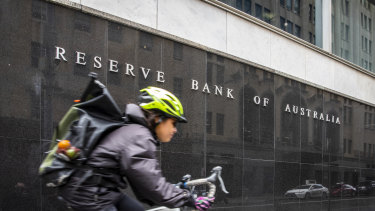 The RBA started the year with the official cash rate at 0.75 per cent.Credit:Louie Douvis

Markets were expecting the bank to hold the cash rate steady. The same markets have the cash rate at 0.1 per cent well into 2022.

Dr Lowe said the economic recovery was "under way", noting that recent indicators had been better than expected.

"This is good news, but the recovery is still expected to be uneven and drawn out and it remains dependent on significant policy support," he said.

Dr Lowe said the RBA's focus would remain on the jobs market.

He said while jobs growth had been strong in October, a further increase in the unemployment rate was likely as more people rejoined the workforce and businesses restructured.

"The board views addressing the high rate of unemployment as an important national priority," he said.

While the recovery is under way, the bank is not expecting to change interest rate settings until 2024.

Dr Lowe said for inflation to get back to the RBA's 2 to 3 per cent target band would require wages growth to be "materially higher".

"This will require significant gains in employment and a return to a tight labour market. Given the outlook, the board is not expecting to increase the cash rate for at least three years," he said.

The RBA started the year with the official cash rate at 0.75 per cent. But through March and then November, it cut the rate to its current level.

It has also extended a line of credit worth up to $200 billion to the nation's commercial banks in a bid to on-lend that cash to small and medium-sized businesses.

There are signs low interest rates are feeding into the nation's property market.

CoreLogic reported on Tuesday property prices in every capital city increased in November, climbing by 0.8 per cent nationally.

While overall prices remain below where they were in March, on the current trajectory there could be a full recovery by February for most cities.

at, holds, interest, rates, RBA, re
You may also like: