RBA holds rates at 0.25pc ahead of key economic data

The Reserve Bank of Australia has held official interest rates at a record low 0.25 per cent ahead of new data set to confirm the nation's deepest economic downturn since the 1930s.

Following its regular monthly meeting on Tuesday, RBA governor Philip Lowe confirmed official rates would remain where they have been since March. 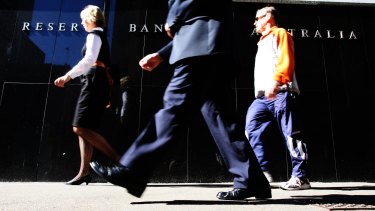 RBA governor Philip Lowe confirmed official rates would remain where they have been since March.Credit:Peter Braig

The meeting was the bank's last before the June national accounts to be released on Wednesday, which are expected to show the economy contracting by at least 5 per cent through the quarter. Economists expect the figures to confirm Australia's first recession since 1990-91.

Australian Bureau of Statistics figures earlier showed net exports would contribute about 0.5 percentage points towards growth in the quarter while government spending is expected to provide a similar boost.

But there are more signs of the way the stage four lockdown of Melbourne is affecting the national economy.

CoreLogic’s monthly measure of house values showed Melbourne suffered the biggest hit of any capital through August, falling by 1.4 per cent. House values in Melbourne fell 4 per cent in the past quarter and are down 2.5 per cent so far this year.

Sydney fared better but even there house values dipped 0.5 per cent in August to be 2.4 per cent lower over the quarter. They are still up by 1.7 per cent this year.

Data from ANZ's network of debit and credit cards, released on Tuesday, showed spending growth turned negative in the week to August 29. It was the first time spending had turned negative since May 17.

Spending in Victoria is now down 27 per cent from last year while in NSW it is down by 0.5 per cent.