‘She’s got a double chin, short legs and a pot belly’: What Richard Burton REALLY thought about Liz Taylor … and other unexpected luvvie revelations

BOOK OF THE WEEK

Break a leg! A dictionary of theatrical quotations

Within my scintillating Larryography, published in 1996 and still available on Amazon for 1p, I quoted Lord Olivier to the effect that ‘the theatre is no fit place for a grown-up person’.

He meant that all this dressing up and showing off was an infantile and attention-seeking pursuit. The funny voices, silly walks, false noses.

In Michele Brown’s compendium of old and shiny chestnuts, Olivier comes out with the same idea. 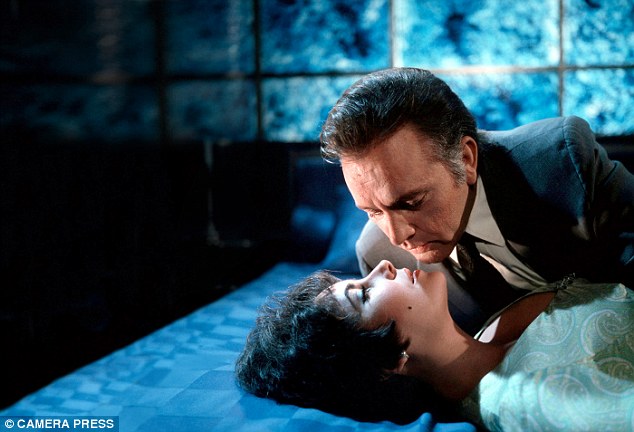 One of the quotes collected saw Richard Burton refer to his wife Liz Taylor as having a ‘double chin, short legs and a pot belly’

Acting, he says, ‘is hardly the occupation of an adult’ — and if Break A Leg! can be thought to have an underlying theme, it is that a large dollop of crude childishness is required.

Katharine Hepburn saw her job as ‘just waiting for the custard pie’ — the element of surprise or humiliation; the punchline and the plot twist.

I also liked Sinead Cusack’s belief that ‘acting is the shy person’s revenge on the world’. What a solace it can be for the meek to be given a polished script in advance. 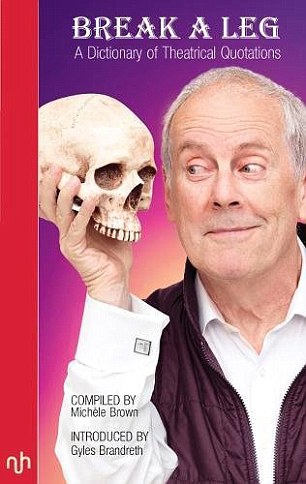 This is what Oscar Wilde meant when he claimed that the theatre was so much more real than real life, which by contrast is muddled, frightening and inconsequential.

Childishness can mean a blissful, winning innocence: ‘And what have you done, Miss Seyler?’, a casting-director once asked the great Athene Seyler, who was in lots of comedy classics with Terry-Thomas. ‘Do you mean this morning?’, she replied sweetly.

But mostly brattishness seems to admit beastliness. How cruel actors are, when summing each other up.

‘You haven’t enough personality to worry a leading man,’ Laurence Olivier told Anthony Quayle, crushingly. To Dustin Hoffman — who, in order to play a scene in Marathon Man where he was to look exhausted, didn’t sleep for three nights — he suggested: ‘My dear boy, why don’t you just try acting? It’s so much easier.’

I wonder how Elizabeth Taylor felt when Richard Burton said of her chivalrously: ‘She has an incipient double chin, her legs are too short, and she has a slight pot belly.’ The critics were no kinder — they called her performance in The Little Foxes, in 1981, ‘as grisly as an undertakers’ picnic’.

Indeed, there’s more than a touch of sexism and misogyny, if not outright sadism, in many of the comments Michele Brown has gathered about actresses.

‘Diana Rigg is built like a brick mausoleum with insufficient flying buttresses’; ‘Vivien Leigh had big hands and packed a hefty slap’; ‘Mae West is a plumber’s idea of Cleopatra’; ‘Two things should be cut. The second act and Bonnie Langford’s throat.’ 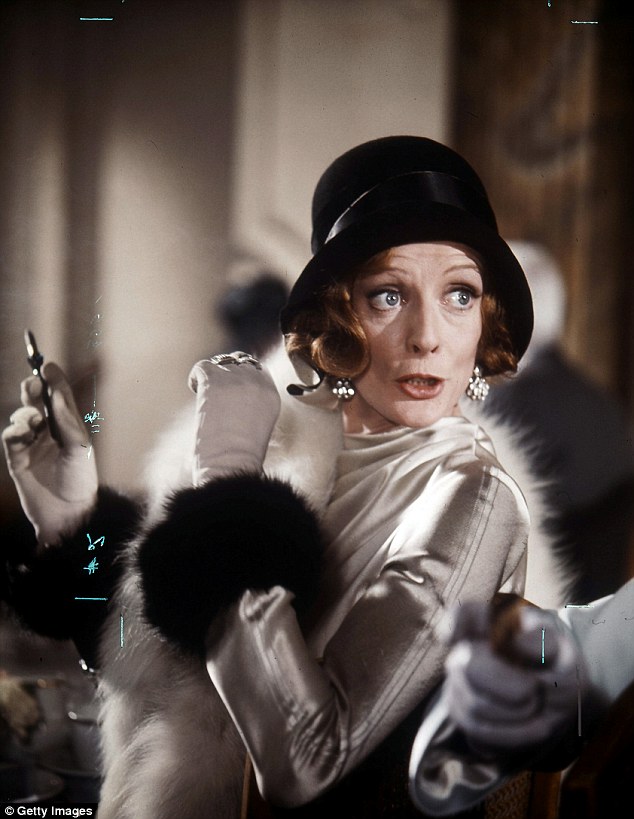 A quote from Maggie Smith (pictured), reads: ‘One went to school, one wanted to act, one started to act, and one is still acting’

Women fare only marginally less well than directors who, like parents or schoolteachers, are there to be mocked. ‘My attitude to make-up is the same as my attitude to directors,’ said Denholm Elliott. ‘Never use them.’

Wilfrid Hyde-White was similarly dismissive. ‘The only time the director is of any use to me is if I’ve left my script in the car and he volunteers to fetch it.’ This will be why, in film after film, these sterling actors gave exactly the same performance — though I am reminded of what Peter Sellers said of producers: that their sole purpose, as far as he was concerned, was ‘to make sure my dry-cleaning gets done’.

If you call on an actor or actress backstage after the show, the best way to soothe their rampant and insecure ego is to come out with something ambiguous and non-committal.

‘My dear chap! Good isn’t the word!’ was W. S. Gilbert’s favourite line. It’s lucky Tolstoy never encountered Shakespeare, as the Russian thought the Bard’s plays ‘cruel, immoral, vulgar and senseless’. I’m sure George VI kept his opinion of Ralph Richardson private: ‘I don’t know his name but he’s got a face like half a teapot.’ 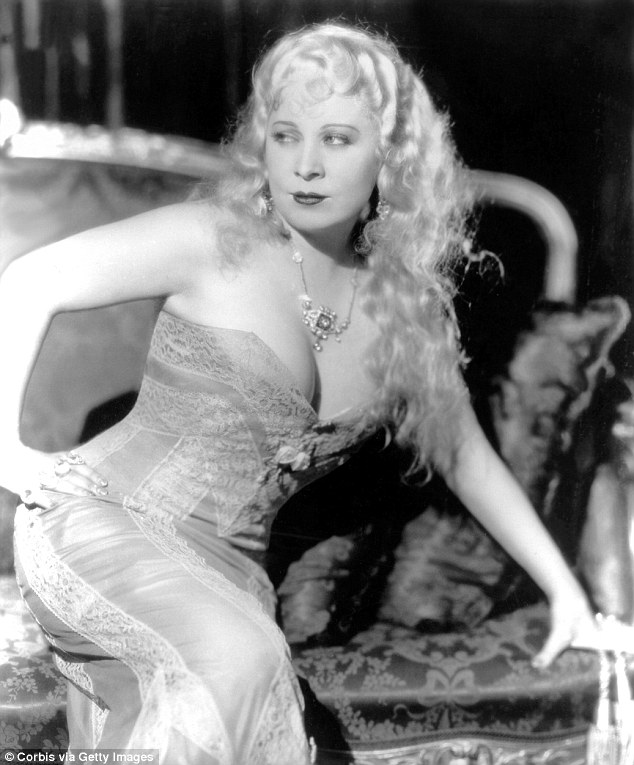 Sexist comments are common with one referring to Mae West (pictured): ‘Mae West is a plumber’s idea of Cleopatra’

The funniest remark in this book is attributed to choreographer Robert Helpmann, who said: ‘The trouble with nude dancing is that not everything stops when the music stops.’

Or what about Maggie Smith, whose autobiography is the shortest in the history of the world: ‘One went to school, one wanted to act, one started to act, and one is still acting.’ Perhaps she could flesh it out with some photographs? 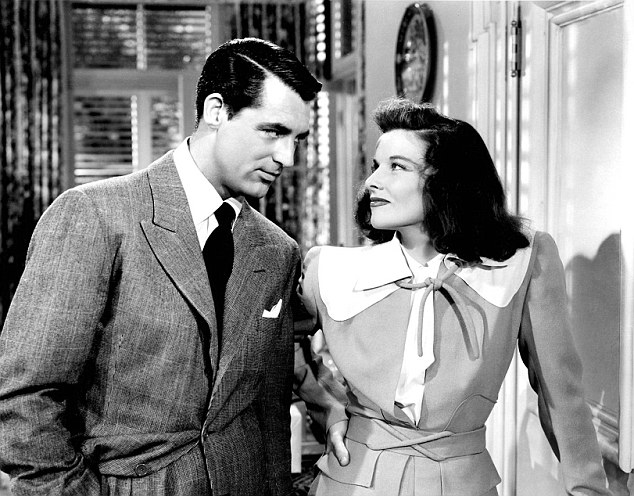 In a revealing comment, Katharine Hepburn saw her job as ‘just waiting for the custard pie’ — the element of humiliation

This dictionary of theatrical quotations, which is a perfect bedside companion, is introduced by Gyles Brandreth who, when he was at Oxford and before he married Michele Brown, devised a pantomime in which the Fairy Queen was played by Eliza Manningham-Buller, later the head of MI5. Brandreth also proposed a musical version of Waiting For Godot, which was sternly blocked by Samuel Beckett. (It is surely apocryphal that it was going to be called Talk Of The Devil, Here Comes Godot!)

As I leafed through the inevitable chapters on George Bernard Shaw and Noel Coward, what I did begin to wonder was: where are all the more recent personalities?

From the evidence presented, theatrical anecdotes abruptly ceased with Peter O’Toole (‘Sobriety’s a real turn-on for me. You can see what you’re doing.’) and Tallulah Bankhead (‘Cocaine isn’t habit-forming. I should know. I’ve been using it for years’). Someone clearly got on the bad side of Vivien Leigh, describer her: ‘Vivien Leigh had big hands and packed a hefty slap’

Why has no amusing remark been made or daft tale wittily recorded in over a half a century? Is it because actors and actresses now take what they do tremendously seriously and the play-pen element has gone?

Are they too boringly grown up? It’ll be another of those puritanical side-effects ushered in along with Pilates, sparkling water, socialism, veganism, early nights, virtue-signalling and gender-neutral toilets (which have already been installed at the Barbican Centre). A famous quote form Tallulah Bankhead said: ‘Cocaine isn’t habit-forming. I should know. I’ve been using it for years’

Vegas Workers Required To Mask Up, But Tourists Given Free Pass