RICHARD LITTLEJOHN: I don’t fancy a fresh dressed Cromer bat… once this lockdown is over, I’m buying the largest local lobster I can lay my hands on

Cynical opportunists have seized on the coronavirus crisis to further their own selfish agendas.

Remoaners are trying to exploit the lockdown and resultant economic chaos to extend Britain’s membership of the EU and even derail Brexit altogether.

The Greta Thunberg Fan Club is attempting to use Covid-19 as an excuse to curb freedom of movement, banning cars from city centres and curtailing air travel.

London’s two-bob chancer of a mayor Genghis Khan has capitalised shamelessly on the financial black hole affecting bus, train and Tube services — by raising fares and the congestion charge and building even more cycle lanes.

Other councils are following suit. We keep being told that in future we must accept all these so-called ‘emergency’ measures as the ‘new normal’. In Scotland, Wee Burney and her Toytown Tartanistas see the Covid crisis as just another weapon in their never-ending campaign to secure a new independence referendum.

Across the private sector, struggling companies are shedding workers they planned to get rid of anyway and blaming it on corona, confident that the Government will pick up the bill — either through the furlough scheme or the benefits system.

So it was only a matter of time before the animal rights brigade got in on the act, too. In one of the more bizarre developments, they are trying to force the annual Cromer and Sheringham Crab and Lobster Festival to turn vegan. 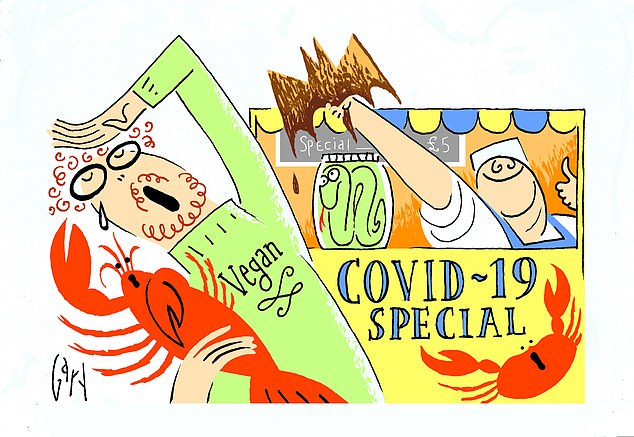 Every year thousands of visitors flock to the North Norfolk coast to enjoy the fabulous fresh seafood, caught by generations of local fishermen, going back to the turn of the 19th century and beyond.

The festival, which was cancelled this year because of the lockdown, is one of the highlights of the summer season.

Tourism is vital to the economic wellbeing of the area and will be increasingly as we are all encouraged to staycation in Britain for the foreseeable future.

So it makes no sense whatsover to torpedo one of the main attractions. Cromer brown crab is rightly celebrated for its sweetness and fragrance.

I can vouch personally for its excellence. My wife’s parents retired to Sheringham and my sister-in-law and her husband still live there.

No visit is complete without a tub of cockles on the promenade and a couple of dressed crabs to bring home. And Cookie’s Crab Shop, at nearby Salthouse, serves some of the most delicious sandwiches anywhere.

Now, though, People for the Ethical Treatment of Animals (PETA) want to put a stop to the sale of all seafood. They’ve written to the organisers asking for the festival to go vegan when it resumes next year.

Dawn Carr, who describes herself as director of vegan corporate projects, said: ‘Because Covid-19 emerged from a market where live and dead animals were sold for food, festivals that celebrate eating animals should be a thing of the past.’

Hang on. Is she seriously suggesting that the Cromer and Sheringham Crab and Lobster Festival is right up there with the Wuhan Wet Market in China, which is said to be the source of coronavirus? The clue’s in the name. The festival features, er, crab and lobster.

I’ve never seen a deep-fried dead dog on a whelk stall, or on the menu at a cafe near Cromer pier. To the best of my knowledge, chippies in Sheringham aren’t knocking out snake and chips alongside the skate and saveloys.

Maybe the odd holidaymaker has experienced a funny tummy after eating a dodgy cockle, but there is no record of Cromer crab ever starting a worldwide pandemic.

When was the last time anyone went to North Norfolk and ordered a plate of delicious dressed bat?

Once this lockdown’s over, I’m heading for Cromer and buying the largest local lobster I can lay my hands on.

Izzy Wizzy Gale’s in a Tizzy

One of Cummings’s most vocal critics is the Tory MP Roger Gale, someone never mistaken for a ray of sunshine.

Gale, who used to work on The Sooty Show at the BBC, is no fan of the popular Press.

So when he found himself at a formal lunch sitting opposite ex-Sun editor Kelvin MacKenzie, late of this parish, he was horrified. 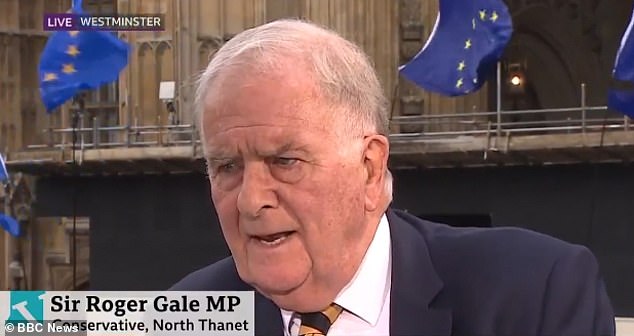 He wasn’t going to break bread with a tabloid reptile, so he stormed off.

As Gale took his leave, Kelvin raised his right hand, wiggled his fingers, and waved him off in his best Harry Corbett voice: 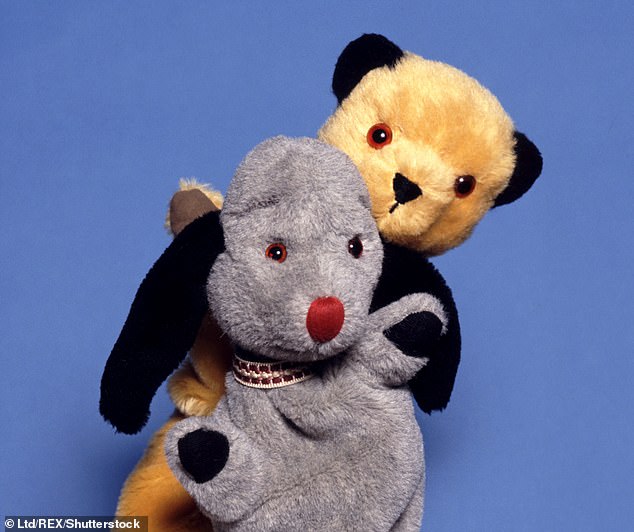 Tory grandee Sir Roger Gale, who used to work on The Sooty Show at the BBC, is no fan of the popular Press

Why do Plod allow these intimidating picket mobs

Something I forgot to mention in my recent Saturday essay about union misrule was secondary picketing.

This was the once common practice of blockading businesses not directly involved in an industrial dispute.

For instance, striking miners laying siege to coke depots and power stations, or car workers attempting to cut off parts supplies to their factories.

It was outlawed by the Thatcher government as a result of the 1984 coal strike, which saw the widespread use of flying pickets.

After that, strikers could only picket their own workplace. Even there, anyone using threatening behaviour or language, or displaying offensive material on banners or placards, is committing a criminal offence.

How, then, to describe the picketing of private houses? For the past few days, Dominic Cummings has — like Boris Johnson and Jacob Rees-Mogg before him — had to run the gauntlet of Left-wing militants outside his home. 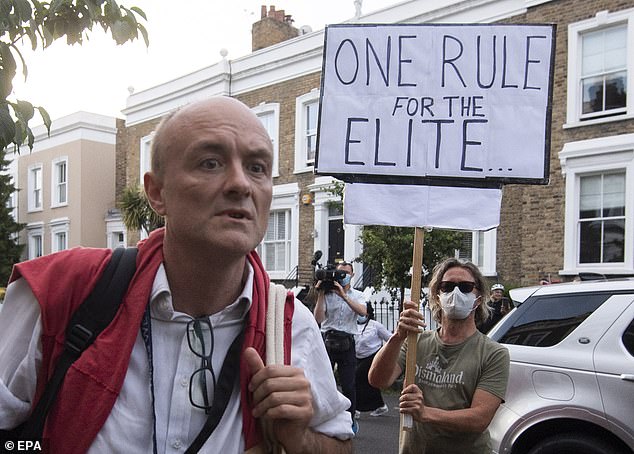 Whatever you think of him, why should protesters be allowed to intimidate Cummings and his family, including his four-year-old child?

He’s been sworn at, and had ‘Scummings’ and other abuse scrawled on walls.

Peaceful protest is one thing, but hurling threats and insults at people outside their homes is despicable. Why isn’t it illegal, too? Yet the self-styled ‘liberal’ Left believe such thuggery — when directed at Tories — is not only perfectly acceptable, it should be encouraged.

This kind of disgusting behaviour wouldn’t be allowed at a factory gate, so why is it tolerated in a residential street?

Perhaps now Plod have stopped scouring Cummings’s satnav for evidence of a crime, they might care to enlighten us. 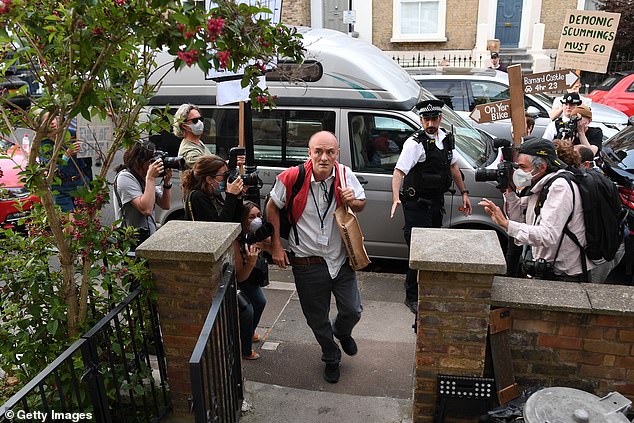 Chief Advisor to Prime Minister Boris Johnson, Dominic Cummings returns home after making a statement inside 10 Downing Street on May 25, 2020 in London, England

Last week I lamented the fact that because of coronavirus, and in the name of good hygiene, sauce bottles in restaurants are being replaced with those irritating individual sachets.

I’ve since heard from Mail reader Ros Gooding, who was having a meal in a pub on the River Hamble, in Hampshire.

At the next table, she noticed a diner take a sachet of tomato ketchup from the condiment bowl, floss his teeth with it and then put it back. It doesn’t get more hygienic than that.

It reminded me of the time the new plastic fivers were issued. In a Glasgow pub I saw a bloke use one to dislodge a piece of food stuck between his teeth, then casually pay for his pint with it.

Never having heard Cummings speak before, I’ve been trying to work out who he sounds like. Then it struck me. He’s a dead ringer for Wearside Jack, the hoaxer who kept calling the police pretending to be the Yorkshire Ripper 40-odd years ago.

Never mind Durham. Can Dom account for his movements between 1978 and 1979?

What a joy to see Pixie Balls-Cooper back, foaming at the mouth again.

She’d gone quiet lately, after spending most of the last Parliament screaming like a fishwife about Brexit.

I wonder how she’s been getting on in lockdown with all those Syrian refugees she promised to invite into her home a couple of years ago.

It must have been mighty crowded. I mean, she did take them in, didn’t she?

Dog grooming parlours are open, but not hairdressers.

And, yesterday, pictures emerged of three freshly trimmed alpacas at a farm in Surrey.

Which begs the question: why can’t we get a haircut yet, but we can take an alpaca for a short back and sides?

When can I go to the gym, beauty salon and swimming pool? Timeline for when businesses can open in July