Members of the royal family have a large number of people who work for them from chefs to chauffeurs to maids and butlers. Most people figure their aides are given some strict or bizarre rules to follow. Turns out that is true even when it comes to setting the table before meals as staffers have to use a specific food map.

Here’s more on that, plus some of the other odd rules in place for the royal household staff. 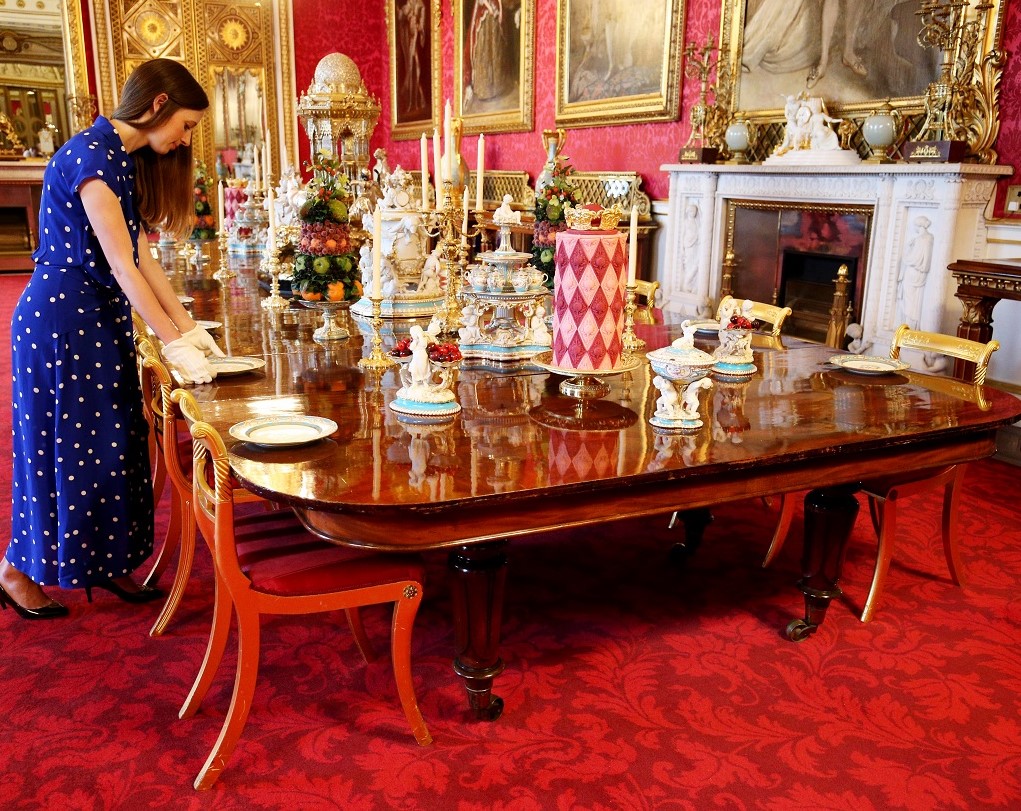 How many staffers work at Buckingham Palace?

Buckingham Place is Queen Elizabeth II‘s official home base for work. The London residence has a massive 828,000 square feet of living space with 775 rooms. These include 19 Staterooms, 52 royal and guest bedrooms, 188 bedrooms for staffers, 92 offices, and 78 bathrooms. That means a lot of people must be employed for its upkeep.

Forbes noted that the monarch has more than 1,000 staff members and around 800 of them work at Buckingham Palace. Jobs include everything from housekeepers to valets to footman to dishwashers. And the pay for most positions is around $20,000 annually. Many staffers live at the palace as well and their rent is deducted from their paycheck.

How staffers must set the table

Back in 2003, a reporter for the Daily Mirror named Ryan Parry went undercover and got a job as a footman at Buckingham Palace.

“For the past eight weeks, I have enjoyed unfettered access throughout Buckingham Palace as one of the royal family’s key aides,” he said at the time.

Parry witnessed firsthand and performed the jobs expected of a footman. And once his assignment was over, he shared with the public some of the rules those who work behind palace walls follow every day.

He revealed there were food maps of how each royal’s tray should be arranged for various meals. One example he noted was that Prince Philip likes his oatcakes directly next to the honey. The royals have been eating that way for such a long time that it’s likely nothing has been rearranged in decades.

After Parry went undercover, reports from staffers who worked for Princess Margaret surfaced as they revealed some specifics they had previously had to follow as well. Her aides had to be mindful when doing a table setting to never use the actual word “placement.” The Countess of Snowdon didn’t like the way it sounded so she banned them from using it. Therefore, they had to say “place a table” instead.

Other mealtime rules that must be followed

Parry also wrote about another odd rule in which “one maid was in charge of pouring coffee from the hot plate into the silver pot. Then he would carry it on a tray to a different staff member who would carry it a few feet further to the queen.”

A former butler for the monarch discussed a rule he had to follow about the proper way to alert her when supper is ready. In the documentary Royal Servants, Paul Kidd, who was a butler from 1975 to 1982, relayed what happened when he did not summon the royal family matriarch correctly.

“I walked into the middle of the room, got the queen’s attention, I bowed my head and said: ‘Your Majesty, your dinner is ready.’” he recalled. “And her face dropped, just seconds, and I thought: ‘Oh, what have I just said.’ Now, I’d told her her dinner was ready, no harm done, but it’s not the done way, it’s: ‘Your Majesty, dinner is served.’”

Ben Lawson: why I penned the poem To My Country

1 Killed, 42 Injured After Tour Bus Rolls on Its Side on Way to Grand Canyon