Sally Phillips has called out Amazon for selling anti-Down’s syndrome T-shirts after the garments resurfaced on the site last week.

The actress, 51, who lives in London, has three children, the oldest of which, Olly, 16, has Down’s syndrome.

She described the offensive tops – which feature slogans including ‘F*** Down’s syndrome’ – as ‘hatewear’ that demonstrate eugenic ideas ‘are really taking hold’.

The sick T-shirts first appeared on Amazon in March this year but were removed by the retailer after appalled parents complained. 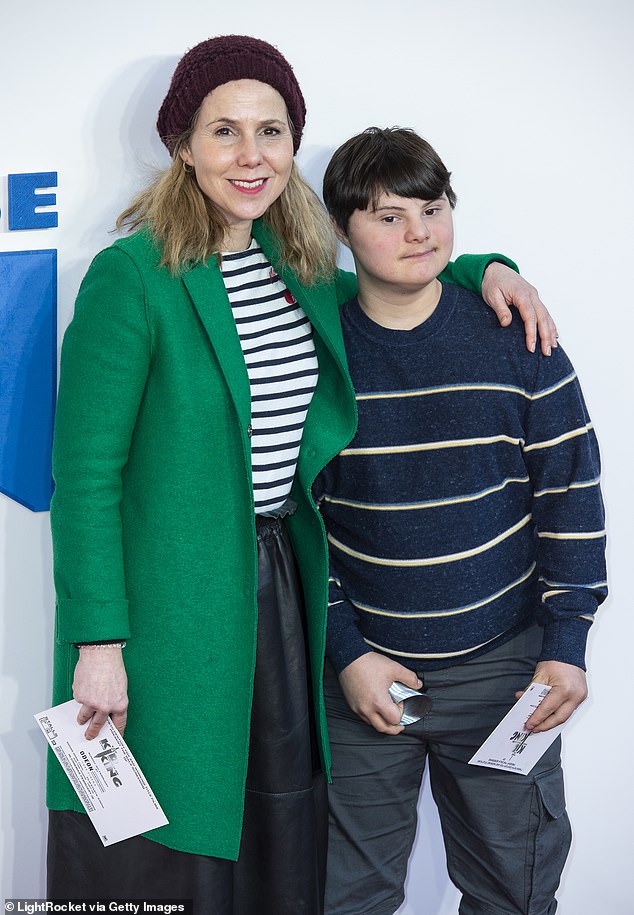 Sally Phillips has called out Amazon for selling anti-Down’s syndrome T-shirts after the garments resurfaced on the online site last week. The actress, 51, who lives in London, has three children, the oldest of which, Olly, 16, pictured together, has Down’s syndrome

But last week another range of tops, one of which read: ‘Let’s make Down Syndrome [sic] extinct’, appeared on the website.

Sickened mother Caroline White, of Bath, whose son Seb is a model with Down’s syndrome, shared a series of screenshots of the T-shirts on Twitter, writing: ‘Look at this offensive s*** I, and other parents of kids with Down’s syndrome, have to see. @amazon @AmazonHelp how the hell have these been listed??’

Sally, best known for her roles in the Bridget Jones films and the comedy sketch show Smack the Pony, shared an impassioned tweet calling on Amazon to take action against the vile T-shirts after spotting a further post by Brent Marriner, from Sunderland, and his ‘Mam’ Jacqui Tyson, who run the joint account @AmazingBrent.

Sharing a photo of himself in T-shirt with the slogan ‘keep calm, it’s only another chromosome’ beside a picture of the offensive tee, Brent, who has Down’s syndrome, wrote: ‘Mam showed me this T-shirt.

Sickened mother Caroline White, of Bath, whose son Seb is a model with Down’s syndrome, shared a series of screenshots of the T-shirts on Twitter 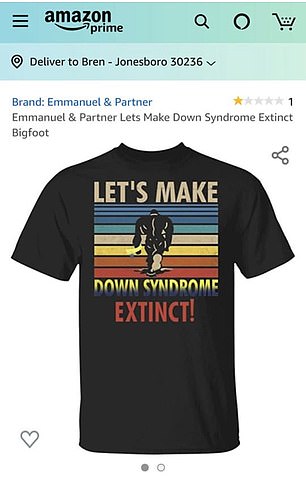 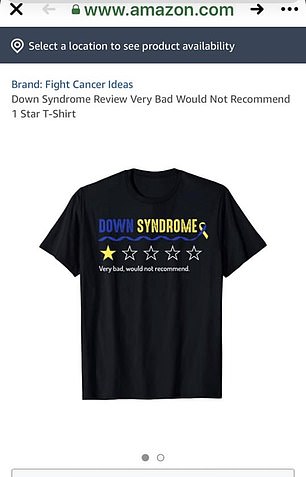 Having first appeared in March, last week another range of the disgusting T-shirts, one of which read: ‘Let’s make Down Syndrome [sic] extinct’, resurfaced on Amazon

‘I think it’s rude and it makes me sad. This is me in a good T-shirt. I like my life. I can do lots of things. Why are they saying that about Down’s syndrome? It’s nasty. It’s unkind. Help me tell @AmazonUK. Please share this.’

Sally shared the tweet, which attracted over 7,300 retweets, writing: ‘Hello tweeps… can you help us get these hateful T-shirts off @AmazonUK? #Noplaceforhate.’

She later said: ‘Eugenic ideas are really taking hold — the idea that there is this subclass of humans and it is better we get rid of them. If you have a world view in which you regard academic intelligence or money-making possibilities as the ultimate goal… then you feel perfectly justified in saying these things. It would break my heart if Olly saw anyone wearing those T-shirts,’ reports The Times.

The listings have since been removed, while a Change.org petition set up by disability campaigner Cristina Bowman, calling for a ban on Amazon sellers ‘inciting Down’s syndrome hate speech’, has attracted more than 16,000 signatures. 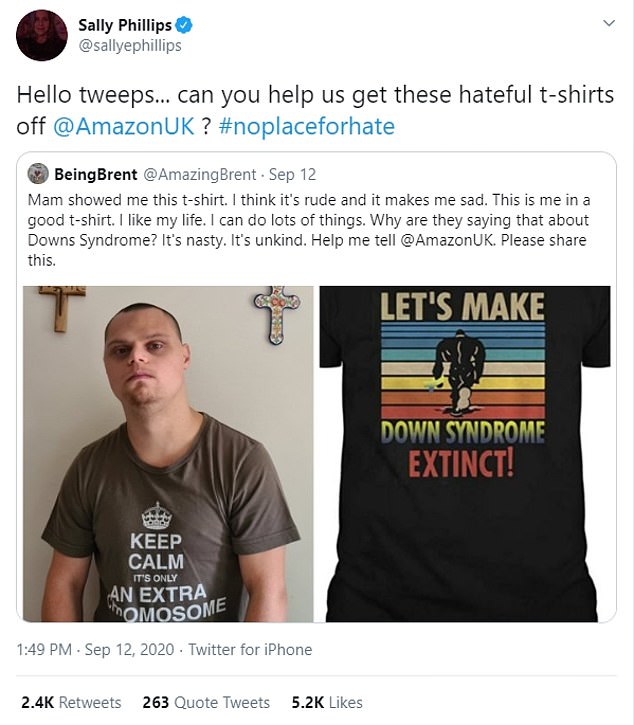 Sally, best known for her roles in the Bridget Jones films and the comedy sketch show Smack the Pony, shared an impassioned tweet calling on Amazon to take action against the vile T-shirts after spotting a further post by Brent Marriner, from Sunderland, pictured left, and his ‘Mam’ Jacqui Tyson, who run the joint account @AmazingBrent

Ms Bowman, 43, said she worried about the impact the tops bearing the hateful slogans would have on her three-year-old son Max, who has Down’s syndrome.

Writing on the Change.org site, she said: ‘We want to see companies who sell items on Amazon that incite hate speech against any minorities banned from ever selling on Amazon again.

‘Many people from the Down’s syndrome community have contacted Amazon time and time again to remove product inciting hate speech against people who have Down’s syndrome.’

She added: ‘Hate crime is no joke and is on the rise against people with learning disabilities. We hope to see Amazon helping the Down’s syndrome community fight against hate crime.’ 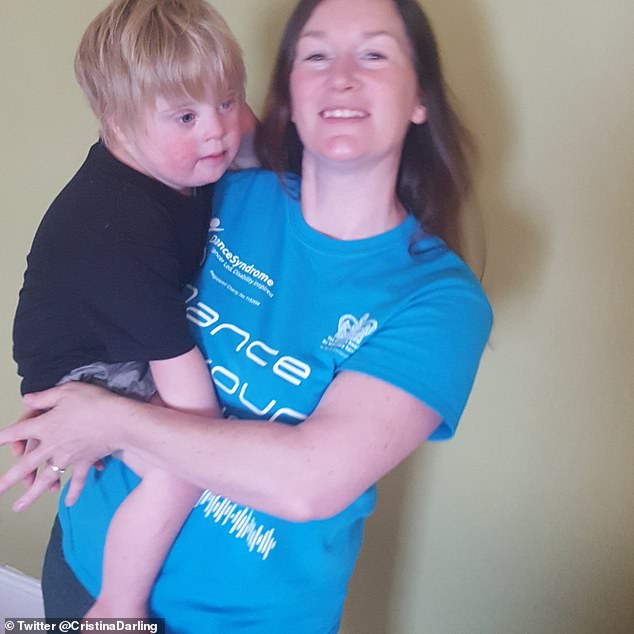 Cristina Bowman, 43, said she worried about the impact the tops bearing the hateful slogans would have on her three-year-old son Max, who has Down’s syndrome (pictured together)

Ms Bowman, who lives near Penrith in Cumbria, told The Times: ‘We’re fighting hard to get positive balanced information out there because so many children are aborted when their parents find out they have Down’s syndrome.

‘Max does not have any serious health problems, he’s the loveliest boy. But we were so scared before he was born because we believed outdated stereotypes.’

Research by the learning disability charity United Response found there were more than 6,000 reported cases of hate crimes against disabled people in 2018/19 – a rise of nearly 12 per cent in 12 months.

An Amazon spokesperson told FEMAIL: ‘All sellers must follow our selling guidelines and those who do not will be subject to action including potential removal of their account.’

Eugenics is the belief that society can be improved by encouraging selective breeding.

Before the atrocities of Nazi Germany, eugenics – the system of measuring human traits, seeking out the desirable ones and cutting out the undesirable ones – was once practiced the world over.

In the decades following the 1859 publication of Charles Darwin’s ‘On the Origin of Species’, the interest in eugenics spread through Britain, the United States and Europe.

Darwin’s theory of evolution created a new interest in genetics and heredity, which fuelled the eugenics movement, with many proponents using his work as scientific justification for eugenics.

In the late 19th century, advocates claimed that wealthier and more sucessful members of society were being ‘outbred’ by the lower classes and the ‘unfit’, and that the human race was at risk of deterioration.

Improvements in medicine as well as charity and centralised governments were blamed for ‘interfering’ with the process of natural selection, as theorised by Darwin, and promoting the survival of the supposed unfit.

Advocates of eugenics during the early twentieth century claimed ‘undesirable’ genetic traits such as dwarfism, deafness and even minor defects like a cleft palate needed to be wiped out of the gene pool.

Scientists would measure the human skulls of felons in an effort to eradicate criminality – whilst other eugenic proponents suggested simply cutting out entire groups of people because of the colour of their skin.

In 1907, the eugenics Education Society was founded in Britain to campaign for sterilisation and marriage restrictions for the weak to prevent the degeneration of Britain’s population.

Meanwhile from 1907 in the United States, men, women and children who were deemed ‘insane, idiotic, imbecile, feebleminded or epileptic’ were forcibly sterilised, often without being informed of what was being done to them.

Hitler believed the nation had become weak, corrupted by dysgenics, the infusion of degenerate elements into its bloodstream.

In 1931, Labour MP Archibald Church proposed a bill for the compulsory sterilisation of certain categories of ‘mental patient’ in Parliament.

Adolf Hitler was said to have first studied the ‘racial hygiene’ movement during his imprisonment in Landsberg Prison in 1924.

But when it came to enacting Nazi eugenics policy, he was inspired by the United States’ programs of forced sterilisation, especially California’s compulsary sterilisation of citizens suffering from genetic disorders.

After the Nuremberg Laws were passed in 1935, both marriage partners had to be tested for hereditary diseases to preserve the supposed racial purity of the Aryan race.

The Nazis also established a euthanasia programme for those deemed disabled, run from Hartheim Euthanasia Centre.

Victims were initially gassed in buses used to transport them from their homes, but gas chambers were later developed.

A Genetic Health Court was also set up to decide if men and women should be sterilised, on the grounds of diseases including ‘feeble-mindedness’, schizophrenia, manic depression, epilepsy, Huntington’s chorea, genetic blindness, and ‘severe alcoholism’.

After the horrors of World War II, the idea of ‘racial hygiene’ fell out of favour, although prominent figures continued to support the theories of eugenics, including Marie Stopes.

As medical technology advanced, a new form of eugenics has grown in popularity.

Modern eugenics, known as human genetic engineering, sees the alteration of genes to prevent disease, cure disease or improve your body in some significant way.

The benefits of the principle are staggering, as devastating illnesses could potentially be cured.

However, there is a potential cost in modern genetic engineering, because people could potentially eliminate what they consider ‘undesirable’ traits in their children before they’re even born.

Many consider this idea controversial, because what these ‘undesirable’ traits is left open to interpretation.

Prenatal screening could be considered by some as a form of eugenics, as it may lead to abortions of children with certain traits.

And earlier this year, a Chinese scientist called He Jiankui caused global controversy by altering the embryos of twins to make them immune to HIV.

He used the powerful gene-editing procedure CRISPR to modify the DNA of unborn twin girls, nicknamed ‘Lulu’ and ‘Nana’.

In March of this year, a group of international scientists called for a worldwide ban on editing genes to make ‘designer babies’.

Researchers asked for a ban on editing the DNA of living humans because they say there’s a need to slow down the ‘most adventurous plans to re-engineer the human species’.

Gene-editing is a process in which scientists can add, remove or change sections of DNA which ultimately affect how an organism is formed.

In humans, editing them could one day mean manipulating DNA to instruct the body to produce a certain hair or eye colour, or changing those which cause incurable conditions like cystic fibrosis or muscular dystrophy.

Scientists have argued the technology would ‘open the door’ for affluent parents to choose the best qualities and create a new form of genetically modified human.

‘Stranger Things 4’ Planned to Kill Another Character: ‘Most Radical Departure’ From Original Ending