Sand artist wows judges on America’s Got Talent: The Champions

‘I have never been more impressed’: Talented ‘sand artist’ leaves America’s Got Talent judges in awe with her incredible moving drawings that chart one man’s life from birth to death

A talented sand animation artist who won Ukraine’s Got Talent ten years ago wowed the judges and audience with an emotional performance on America’s Got Talent: The Champions on Monday night.

33-year-old Kseniya Simonova, from Ukraine, told the story of a young boy who grew up to be an artist and forgot about his parents through a series of incredible sand paintings.

The mother-of-two, who won Ukraine’s Got Talent in 2009, said that growing up she had always loved drawing, but when she found sand, she described it as finding her ‘second hand’. 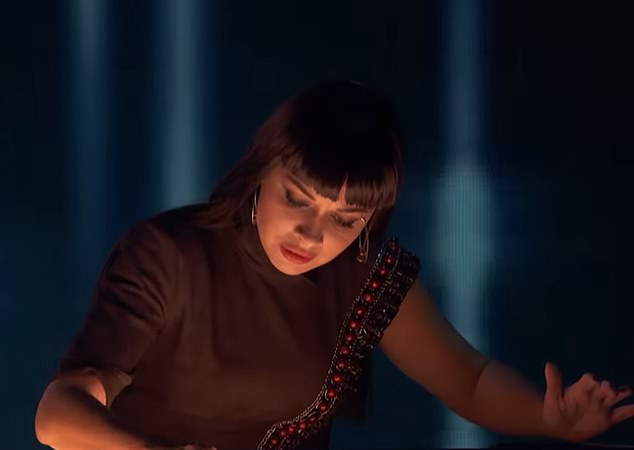 Talent: Kseniya Simonova (pictured), 33, a sand animation artist from Ukraine, wowed judges with her artistic skills on America’s Got Talent: The Champions on Monday night 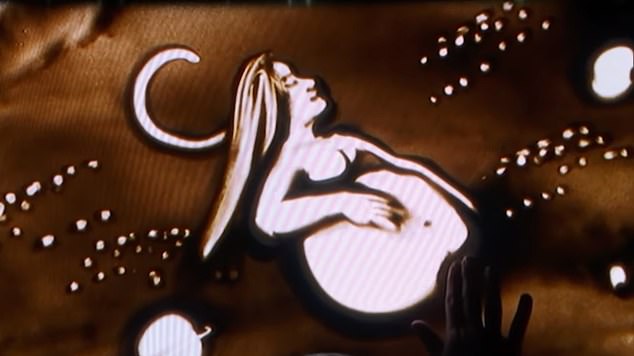 Art: The mother-of-two began by using sand to draw an image of the universe, before adding a pregnant woman into the illustration 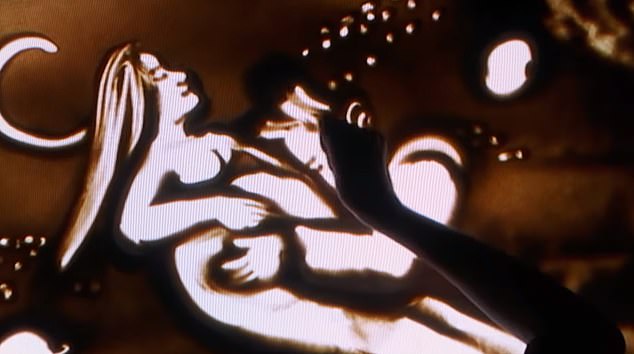 Amazing: She then added a male figure to the picture, and drew him as he hugged the woman’s stomach while the pair lay peacefully 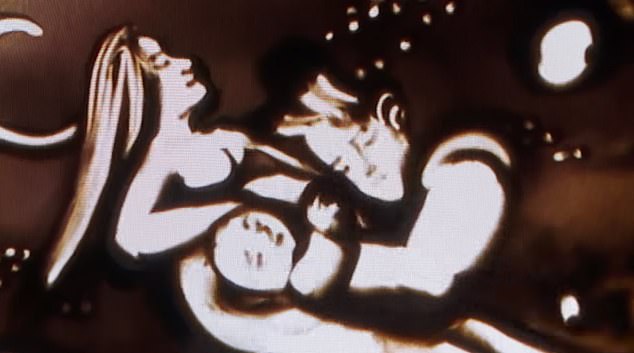 Wow! The final part of the first scene saw a baby being introduced to the animation

‘This is my very first time in America,’ Kseniya revealed in a promotional video ahead of her performance.

‘I’m here representing Ukraine, and I want to show that it is a beautiful artistic place,’ she added. 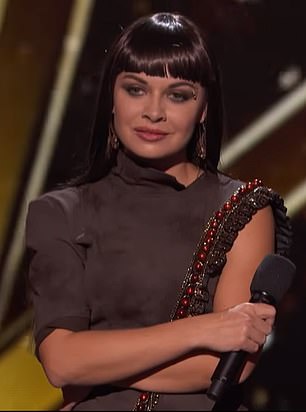 Overseas: Before her performance, the sand artist revealed that this is her first ever time visiting the U.S.

And as she stepped on stage on America’s Got Talent: The Champions on Monday night, Kseniya spoke about the story behind the sand art she would be doing.

She said: ‘This is a story about a child who grew up and became a famous artist, and forgot his parents.’

‘I wish that nobody forgets their parents,’ she added before beginning her performance.

Kseniya began her highly anticipated sand art performance by first creating an animation of what looked like the universe.

She then revealed a gorgeous illustration of a mother, before introducing a husband and baby to the picture.

The talented artist then illustrated the mother, father and baby in a photograph, and added an illustration of the grown-up child as he looked at the photo of himself and his parents. 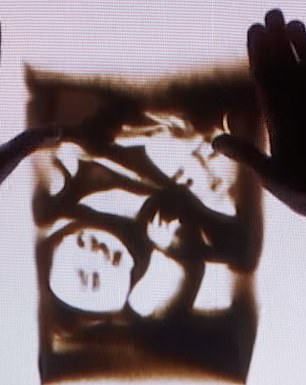 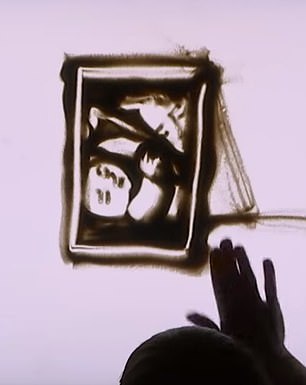 Fantastic! Kseniya then used the sand to make it look as though the illustration was a photograph, as she added a frame to the picture 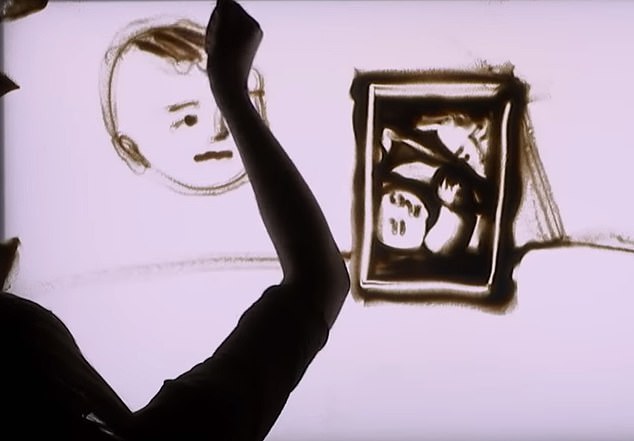 Talented: Next, she illustrated the growth of the baby, as he grew up into a little boy. The animation showed the boy looking at the ‘photograph’ of himself and his parents 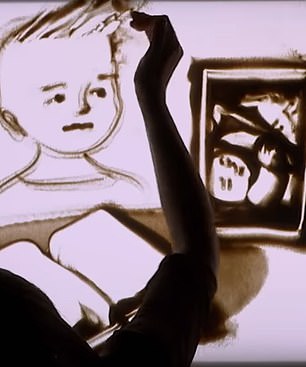 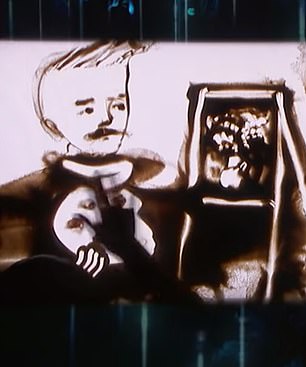 Impressive: The next phase of the sand art saw the little boy growing older, as the artist showed him as a teen before drawing him as a fully grown man, who is also an artist

She then created an image of the little boy as he grew up and became an artist.

The performance then took an emotional turn when she created illustrations of the, now elderly, mother and father. 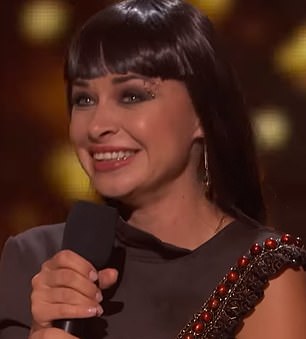 Thrilled! Kseniya was delighted to receive a standing ovation from the panel of judges and the audience after her performance

Kseniya’s illustration then revealed that one of the boy’s parents had died, without him even realizing.

The final scene shows the boy, now a fully-grown adult, mourning the loss of his parents.

To complete the series of artworks, Kseniya wrote a message in the sand, which read: ‘Don’t be late’.

When her performance came to an end, Kseniya received a round of applause and a standing ovation from both audience and judging panel, which consists of Simon Cowell, Mel B, Heidi Klum and Howie Mandel.

Speaking first, Simon said: ‘In my opinion, you are one of the best contestants we have had over the years around all the world.

‘Genuinely, to see it unfold in front of our eyes and your use of music and storytelling, it was fantastic,’ he added. 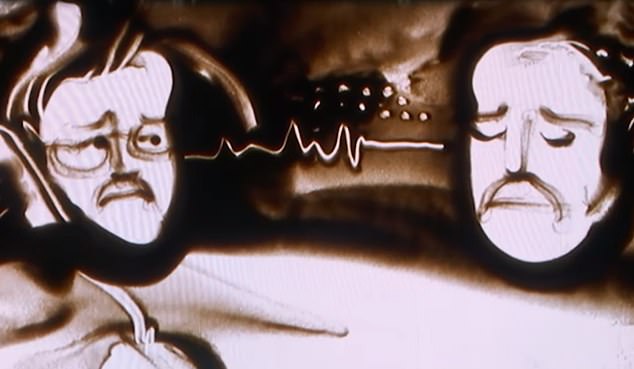 Emotional: The art took an emotional turn, when Kseniya illustrated that the artist had forgotten about his parents, and wasn’t present when one of his parents passed away 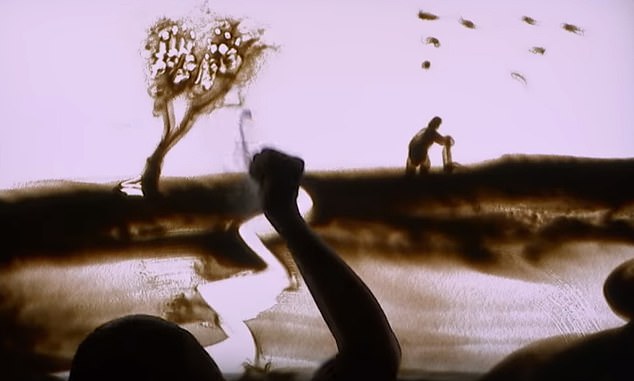 Wow: In the subsequent scene, the remaining parent can be seen in their old age, using a walking stick to support themselves as they walk through a park 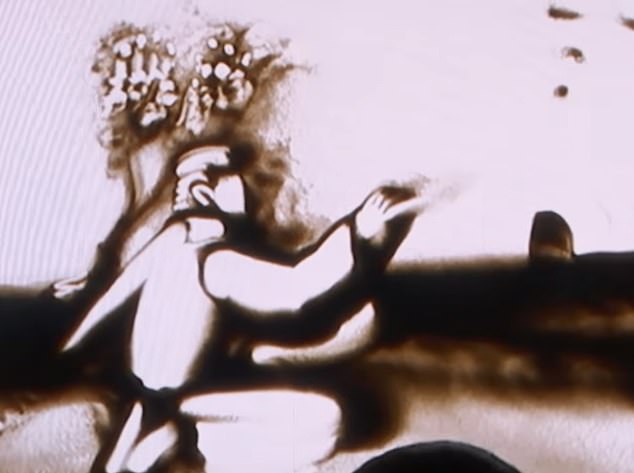 Incredible: The final scene of the artwork revealed that the artist’s last remaining parent passed away, as he can be seen mourning them by their grave 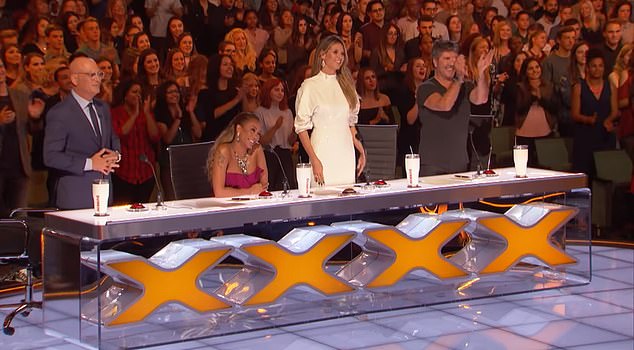 Round of applause: The judges – Howie Mandel, Mel B, Heidi Klum and Simon Cowell (pictured left to right) – gave the sand artist a standing ovation when she concluded the performance 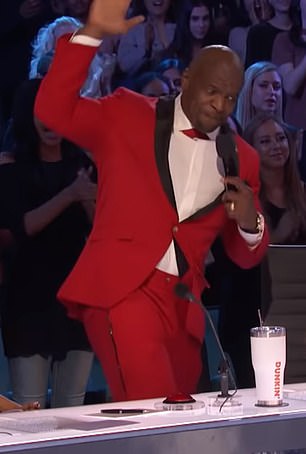 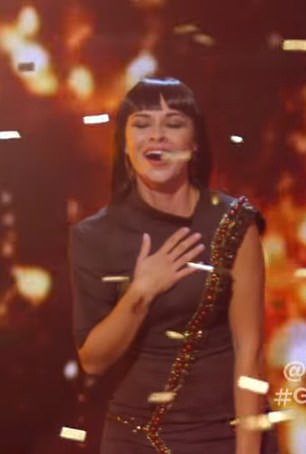 Special moment: After the judges gave their feedback, host Terry Crews came down to the judges table and slammed down on the golden buzzer, which means Kseniya is into the finals

‘That was just incredible,’ Mel B said. ‘Everything that you do is just brilliant.’

Howie added: ‘I agree. It’s so emotional, what you do is beautiful, you are beautiful! Where else can you see sand art?

‘In my mind tonight, right here, right now, you are the champion. I really, truly believe that,’ he added.

The judges feedback was interrupted when the talent show’s host Terry Crews walked down to the judges table.

When he arrived at the table, he said: ‘I have never been more impressed by the ability to move people the way you did today!’

Terry then slammed his hand on the golden buzzer, which automatically catapults Kseniya into the final round of the show.

The mother-of-two was left open-mouthed in shock as the golden confetti fell onto the stage, and the audience cheered for her.

Terry then ran back on stage and gave the sand artist a hug, as he said: ‘You deserved it.’

‘I never thought my sand art would leave my small town,’ Kseniya, who is from a small city near the seaside in Ukraine, said in a preview video before she took to the stage on Monday night. 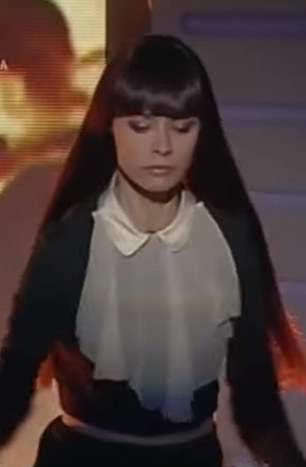 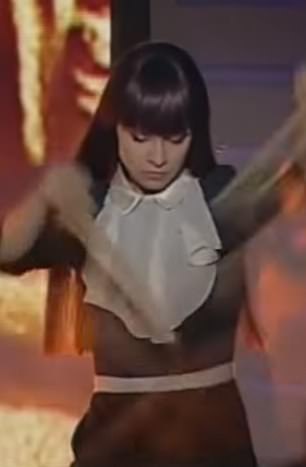 Winner! Kseniya won the winning vote in the Ukraine’s Got Talent finale in 2009, when she wowed the judges and audience with a tear-jerking performance 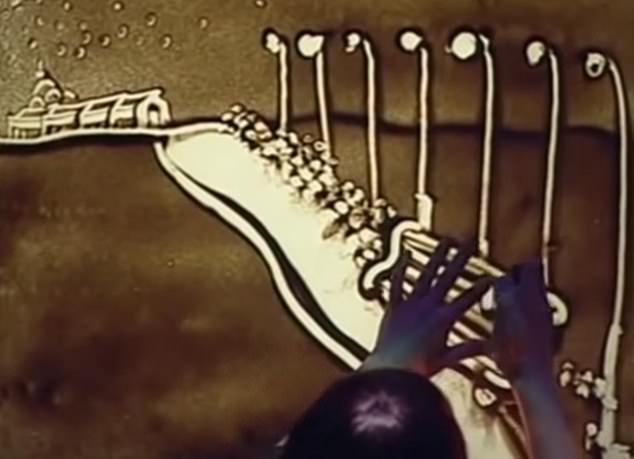 Incredible: Her emotional performance told the story of human loss after the German invasion 1941, as the chaos of the war leaves one woman without her husband as he passes away

The 33-year-old added that her husband secretly signed her up for Ukraine’s Got Talent in 2009, and it was then that she realized that her art would take her further.

Going on the talent show was Kseniya’s very first time performing on a stage.

Describing her first performance, she said: ‘I put my heart on the stage that day.’

After she made her debut on the show, Kseniya went viral as her videos circulated the internet.

‘I couldn’t believe the reaction of my performances,’ she said.

The mother-of-two revealed that winning the talent show completely changed her life, and she used her winnings to buy a new house for herself and her family.

The final of the talent show is due to air on Monday, February 11 on NBC.

Americ, Artist, judges, Sand, wows
You may also like: